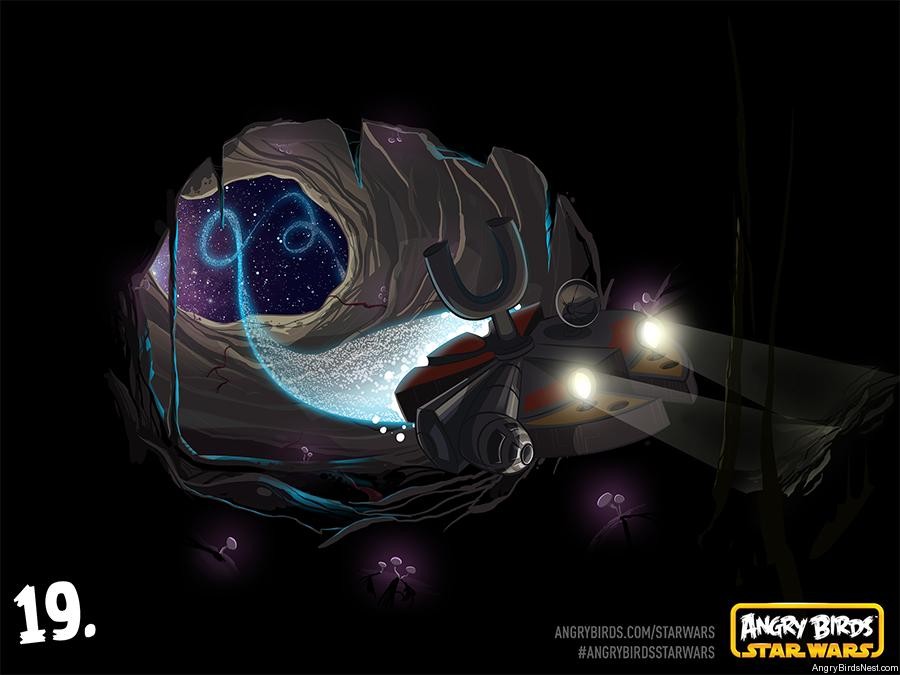 Rovio’s newest app, which has already spent a significant amount of time at #1 in the iOS AppStore, is due for another update! If you have been sitting on a thermal detonator since the first 20 levels of Hoth were released, your tush may soon be soothed! The above image (another issue in the Star Wars Comic series) was teased on Rovio’s social media outlets, and according to Rovio’s Twitter account:

Squawk! What will the birds find at the end of this tunnel? …We’re almost certain they will find new levels! #ComingSoon #EscapeFromHoth #AngryBirdsStarWars http://twitpic.com/bzbjwx

What exactly will be included in this update? We aren’t entirely certain, but as we love to do, let’s speculate a little! We can probably expect a minimum of 10 — or possibly all remaining 20 — levels of Hoth. I’d be willing to bet we’ll have at least one new Droid and one new “Star” bonus level.

We’ll keep our eyes peeled for this update (and the one for Bad Piggies announced yesterday). While we don’t know exactly when either will land, Angry Birds Star Wars in one of the hottest apps around, so I don’t think we’ll have to go too long without it.

Special thanks to @josm for tipping us off.

Whoa! I wonder what update comes first. We have Bad Piggies, AB Rio and AB Star Wars. I also wonder if there will be a Seasons update.

Well… I hope it will. But I hope they won’t publish at the same time.
If they do it, I will crazy.

I hope the update will land with Bad Piggies, so we get 2 updates in one day XD (like last AB seasons “back 2 school and AB space “red planet” updates for PC)

We sincerely hope that doesn’t happen. It’s just far too much work for us to juggle two updates. :-\

Slim, I thank you & Bird Leader for all your hard work.

@AMslimfordy You guys are terrific. I greatly appreciate your diligence & everything you do to make ABN a truly priceless resource for AB fans!

Hopefully not for you, but i think there are a lot of fans happy with 2 on one day, and that is what i think too, beacuse they are constantly posting #comingsoon texts for both games ABSW & BP

I bet, power-ups are also included in the update….

Meh. Hope not. I hate that I don’t get a Space Eagle every day in Space now. Pbbllt. :P

Yep, I think PU’s are here too. I’m actually excited about them… if they’re distinguished! :D

I agree it should be separate…. ;)

I really need to get off my bum & get three stars in all the Star Wars levels. I got a little overwhelmed for a while there.

So we have three update waiting for us.
1.Angry birds RIO – Fruit Market
2.Bad Piggies – Road Hogs
3.Angry Birds Star Wars – Hoth
Well… I have nothing to say about it…

I’m sure Season won’t be long!

That’s great and all but I still want the update for Rio to release the new world. And I don’t know if this has been answered yet, but will there be power-ups for Angry Birds Star Wars??

Well, this is awesome! I’d love if ABSW came before BP and certainly I’d like that two updates didn’t land at same day it would be too much for me. But I am sure you guys from ABN team can cope with that. You are just great!

WOW! Rovio is on the way to surprise us once again! First Bad Piggies, then ABSW…. I wonder what’s next?

any word on when the hoth update comes to ABSW FB?

Probably this thursday, but I don’t know if it will be land with or without Bad Piggies update

Oh you mean ABSW on facebook ?
I pretty doubt it since they’re haven’t release death star episode yet

i suppose there’s no word on that update either?

I guess for now, maybe for surprise update ?
or maybe after they’re finished hoth on the original app, so the facebook app can received the death star and so on . . .

No word on even the Death Star release for SW:FB

What?! Not again! I didn’t got all stars! I have a question:
Do we need all stars from Episodes and Golden Droids?
I’ll watch the answer later.

Only the regular episodic levels are required. You do NOT have to fight for the bonus levels as well.

But now that Rovio has put on this teaser, you’ve got to be real quick to unlock Path of the Jedi. The update could be out at any minute.
May the Force be with you.

If the update is out and you haven´t finished Path of the Jedi, you can just not download it until you do.

DavTheBombBird has a point. Just wait to update it.

I download it and make it automatic update.
I can’t reset it again because there is no Wifi connection in my house.
I did it when I go to a house with connection.

Any news on when Windows Phone might get Hoth levels?

If you look at the Customer Service on twitter,they say the update for windows phone will be a part of this update,so windows phone users instead of getting v1.1.0 first,it gets this new #EscapeFromHoth update,so you will get 40 levels,not 20 :)

Thank you ABN sooo much for warning us about this update. It made me drop everything tonight and finish 3 starring Hoth to level 20 – fortunately I only had 5 levels left. :)

I’m excited! I noticed ABSW fell from #1 in the AppStore a few days ago. Maybe this will boost it back up!

Look at the picture. Maybe these levels will be inside that animal’s stomach?

I guess I was right!

This hopefully means that ABSW update is on its way!

I think this one will be before Bad Piggies. Or possibly in sync with it. Two updates at once would be a nightmare for the admins, but great for us! :)

What do you think. Did we see in next Hoth Updates the next 10 or 20 Levels??

As it turns out, it was 20, which completes the level. Cloud City (Bespin) up next.

Maybe Lando will be birdified.

It is almost midday in Europe and still no new updates in iTunes App Store. Wondering if it will be out today.
Same with bad Piggies. Oh, that waiting is difficult task.