My Computer Blew Up, and Piggies Went to the Playground

Just earlier this week my computer decided to walk the path of Epig Failure (It’s like Epic Fail, only pigger) and blew itself and several years of flying pig excellence to smithereens.

Undaunted in their eternal quest to find fun and games, the indomitable piggies decided to do something they have never done in decades, which is, go outside and play! To their dismay, they found the local playgrounds derelict and freaky to hang out in. The playgrounds on Piggy Island were never maintained for years because many young piglets these days prefer to sit in the dark and stare at brightly glowing iPork screens all day, silently absorbing information from cyberspace like so many dormant robotic drones. **

** Based on a true story in 21st Century Earth. 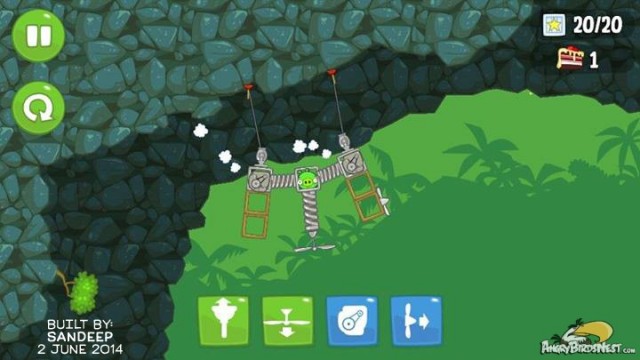 Sandeep’s swing clings to the ceiling like a Spider-Pig!

But just when eternal boredom was about to overcome the land, there appeared a hero from a faraway land named Sandeep (@sandeep-kamath) who did the unthinkable and BUILT A SWING IN BAD PIGGIES! Check it out on Facebook! For many years, pigineers have been constructing cutting-edge military and space hardware but never thought to build anything for the local community. I blame that on long working hours and going home just to eat and sleep! But thankfully, we have awesome Bad Piggies fans like Sandeep to fill in the gap.

On that note, guess what today’s weekend build topic is. That’s right, you got it. Swings come in all shapes and sizes, from the normal variety to insane V-8 powered flying monstrosities to satisfy even the most devout follower of the Church of Horsepower.

And speaking of fans, I had this idea to attach many, many ceiling fans to a vaguely roflcopter-shaped contraption and give the King Pig the ride of his life! He’s sure to shed a few pounds with the thrills and spills of air fright! Who needs aviation safety anyway?

Check out the above pork-tacular display of Epig Failure and go build your own hopefully smaller and safer swing! Don’t forget to send them to the official Bad Piggies Facebook and Twitter pages for a chance to be featured in the limelight next week! You’ll never know what King Pig will reward you with!

This week’s build theme was brought to you by Sandeep (@sandeep-kamath). The rest of you pig fans, come on out and post ideas for next week’s community construction project!

Remove the roter under the swing if king pig wants a rough ride!

Yes, that is a good tip! The swing actually needs downwards thrust otherwise it tends to bounce around like the swing is too light. Chalk one up for weak gravity on whatever world the pigs are on!

You can see issue in my insane FoD ceiling swing. Because of the fatness of the King Pig I didn’t have space to put a propeller on the bottom.

@les-toreadors ~ I’m always amazed with the creations of the Pigineering Crew !!! It’s become a weekly ritual of mine to visit the Pigineering forum to see what new amusements have been posted ~ please keep ’em coming guys and THANK YOU all for sharing !!!

Thanks @uncle-b for the kind compliments. I had actually intended this writeup to be front-paged because it is our Weekend Challenge Report but I couldn’t resist putting a “based on a true story” touch regarding computer explosions and piglets staring at iPorks all day. It’s kind of appropriate then that we tried to put back some part of our childhood by utilizing @sandeep-kamath ‘s Swings theme.

This article actually got posted before the weekend challenge came up so @birdleader might not have been aware we were secretly plotting against the Birds and reserving Weekend Challenge topics from time to time hence the early posting of this article! Without a PC to work on I resorted to publishing articles and the video from my office.

I have recently gotten a habit of writing longer articles here on ABN (www.angrybirdsnest.com/pigineering) but if you need more interesting stuff feel free to visit our youtube channel (http://www.youtube.com/user/evilcatpillow)