It’s the end of June and the Bad Piggies have warned us there’s something crazy coming up this Weekend Challenge: Build a Sandwich! 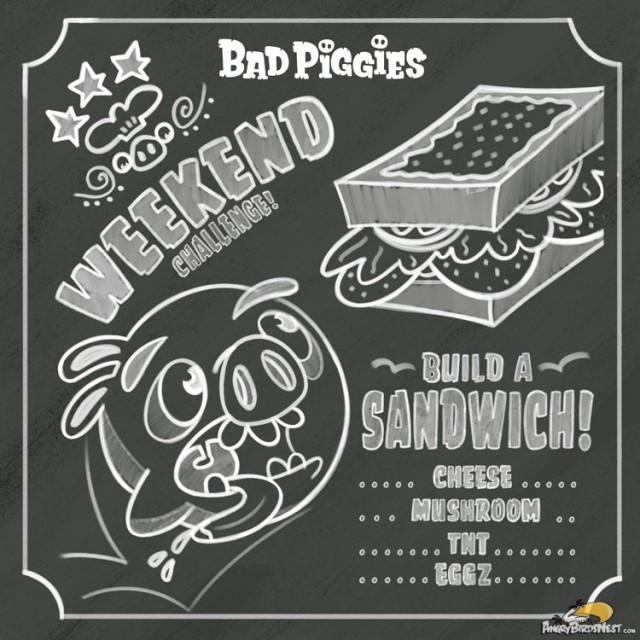 Some say, you are what you eat. Now, you have the rare opportunity to build… yourself!

Not content with merely following convention and slapping stuff in between two pieces of bread and calling it a “sandwich”, the Secretary of Eating & Sleeping took inspiration from Stark Industries’ Mark 42 Iron Man suit in order to rocket food delivery tech to the next generation, since we’re all for thinking big and eating air-delivered, self-assembling quad-stacker sandwiches!

On Earth, we are long accustomed to ordering delicious pizzas on the phone and having them delivered on scooters. That’s not how it’s done in Piggy Island. We use drone ROFLcopters for rapid air-mobile deployment of junk food, since, the Federal Aviation Authority was never set up (ha ha, no commercial drone ban!) and you could fly anything you want from your backyard including experimental aircraft and flying oil tankers. OMG, did someone say Flying Oil Tanker? It’s like the Avengers’ Helicarrier, only pigger!

There is currently no greater threat to Homeland Security than large hungry pigs bouncing all over the place in search for calories. In line with King Pig Office’s current strategy of Victory Through Superior Freshness, the development of Air-Mobile Doctrine here was borne out of the crucial need to keep the larger citizens of our great bacon nation satisfied and ready to sleep.

At this point, I know what you’re thinking. What I am writing is total, utter madness. To which I will say:

ps. If you wish to acquire the Mark 42 Air Mobile Sandwich System, we regret to inform you it is no longer available. All prototypes and production examples were expended in a recent battle against  Angry Bird forces “somewhere in North America”.

Indeed, everything was AWESOME!

Most of the Community’s entrees (oh wow I said entree) on Facepork were much more conventional and I don’t think any of them split into their component pieces and flew away just as King Pig was about to take a bite.

We can trust Stark Industries to make the world a happier place through ridiculous inventions :) Or is that Pork Industries? lol

that is an amazing triple whopper hehe

If Tony Stark ever reads this he must find a way to make beef patties fly! It would surely make the ardous task of constructing a 100×100 burger at In-N-Out that much easier :)

this is a automatic assemblng sandwhich