I’m a frequent reader of automotive blogs, especially the crazier ones which end up having entire sections dedicated to big trucks, incredible aircraft, and other random items of ridiculous awesomeness thrown into the mix. Thus creatively expanded, auto-culture is all about Awesome with a Capital A!

Things that roll are nothing new in the world of Bad Piggies. In fact, a certain piglet in the Angry Birds Toons episode Sneezy Does It probably heralded a trans-pork-tation revolution on Piggy Island by using himself as a wheel instead of attempting the impossible task of physically lifting the King Pig. But of course, like all great inventors in history, this rolling pig innovation was way ahead of the time and never really caught on. It’s probably because this method of locomotion is particularly harmful to the snout. And you know how pig society is: it’s all about the size of the snout. 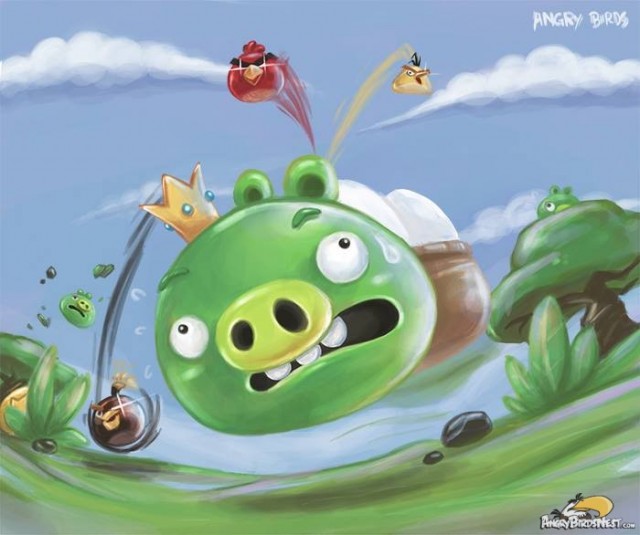 “Get to the chopper!”

In time, with sufficient motivation to invent the wheel (such as, faster access to cake shops, and allowing quicker getaways from Angry Bird attacks), wheeled vehicles have become commonplace on Piggy Island. The first wheeled vehicles in Bad Piggies were quite frankly, ungainly contraptions at best. With the need to traverse rough terrain from pig sty to King Pig’s Office, they don’t resemble anything we know on Earth. Experts conclude those ridiculous inventions must have been built by aliens or small children or small children given incredible intelligence by alien intervention, or something to that extent. 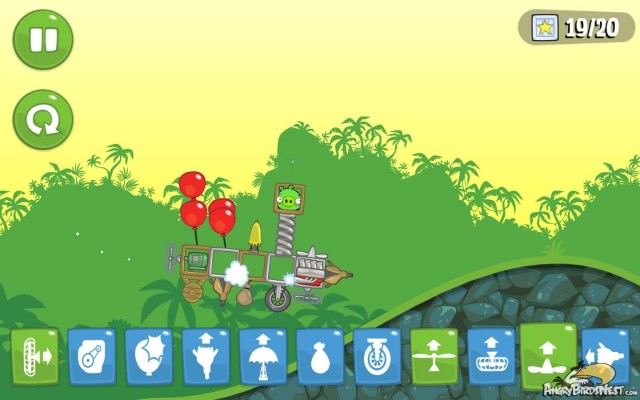 All Terrain Self-Levelling Hovercraft. With limited parts and no idea how stuff worked, this was my first ever machine built to cross the sandbox. It had a sprung cab for driver comfort – how thoughtful is that!?

Other more ambitious contraptions resembled the result of wondering if sticking 20 supercharged V-8 engines into a barn would be a good idea, and indeed with no emissions control laws in place on Piggy Island, it is rather difficult to resist the temptation of cramming every nook and cranny of a vehicle with power producing equipment. With personal rocket cars in fashion as daily drivers, no one cared about fuel economy until there was an oil crisis and suddenly everyone couldn’t afford to put rocket fuel in their cars.

Eventually though, pig society did grow weary of all the craziness of the early Industrial Revolution, and as the Pigtorian Age withdrew into the snout-stamped pages of history, there dawned a new era that emphasized practical pigineering over wasteful experimentation. It’s no longer good enough to build something large and majestic, it must be good for something. The rise of capitalism also meant that it should be mass-marketable as a product; something useful in the daily life of the modern piglet. With that matching of pigineered product to interested customers, came profit.

A family of well to do Pigtorian Era Pigs.

It was somewhere along those lines that the modern automobile was born in the world of Bad Piggies, and the Pork Motor Company mass-produced a whole range of wheeled vehicles that would not be far off from what we see on the roads today.

And as auto-enthusiasts love to point out, you are what you drive. Don’t believe me? Check out some imaginary examples from Piggy Island today!

Yo’ Piggy So Fat…

Yo’ Piggy So Fat, he commutes on a trailer!

This is how we roll in India!

The King Pig is so large that he commutes to various government offices on a Semi Truck. The King Pig’s Office often has to explain why his incredible bulk had broken the scales of a truck weighing station en route. But because he is THE King Pig, he doesn’t have to pay fines for being overweight cargo!

Joanna from our Facepork page has some exclusive pigtures of the King of the Road ruling the Interstate from her Big Rig!

The Moustache Pig – when not reviewing restaurants in the Houston area, is also the fire department’s chief – he owns this Fire Truck which was involved in a dramatic rescue on the Interstate when the King Pig set a car on fire after eating too much chili.

The King Pig has just set a car on fire!

Put out that Sizzling Bacon!

Put out that Sizzling Bacon!

Winged cars are faster… Because Racecar!

Other young piglets decided to do Extreme Makeovers on whatever hand-me-downs they drove in college, to create a variety of incredible custom machines like this lifted van with an “A-Team” spoiler (OMG working independent multilink suspension!) and don’t ever forget this low-rider here.

As a final year project before graduating from Piggy University, aspiring engineers might even try their hand at replicating the incredible Top Gear Hovervan!

Piglets living in rural sectors of Piggy Island utilize mopeds as their primary mode of transport; while puny in size, these tiny 50-150cc motorcycles have proven to be incredibly hardy and capable of moving a surprisingly massive amount of cargo. Stripped-down versions of popular mopeds also prove to be quite the handful for local law enforcement, as large groups of “mat rempits” stage illegal races in the wee hours of the night.

How we roll in Asia!

OMG! Health and Safety’s gonna want to see this!

And with all that said, yes, I imagined all that in my head during a boring bout of “real life” work, it’s all a figment of my imagination and pigs can’t actually drive cars (although, I heard some other animals can!) and there is no such thing as an automotive culture in a sandbox game designed for junior piglets, outside of my tiny little corner of YouTube.

But wait, scroll back to the middle of 2013 on the Official Bad Piggies Facepork page and you’ll see this: –

If it isn’t fanart for the open-world video game “Grand Pork Auto: Andrea’s Hog“, I don’t know what it is! It is said that the Low-Rider scene was invented when the King Pig’s Incredible Bulk completely flattened the suspensions of every single production vehicle in the market, making them literally, Grounded to the Ground!

Hank Lewis (food reviewer in Houston, Texas, of HankOnFood.com), who performed on video the lines used for King Pig’s misadventures, including setting a car on fire, breaking truck weighing stations and causing general mayhem on the Interstate. He also created many plush toy dioramas featuring the Moustache Pig, Mini Moustache Pig and of course the Fat Pig on his 5 year mission to eat his way across the face of the Earth.

Joanna Strand, who has covered the entire United States with the King of the Road on the dash of her Big Rig!

The author knows absolutely nothing about actual car culture, besides having an undying adoration for anything V-8 powered, antique and American. Oh, big trucks are awesome too!

Be sure to check out our Facepork Page for random insanity, and if you want to read more of my “Epig Fail” bacon journalism,  there are many more articles here in the Pigineering Section of Angry Birds Nest!

Random explosions, experimental military technology and crash test piggies may be viewed in the top secret Field of Dreams Proving Grounds at Area Piggy One (51).