King Pig was seen rolling along the Field of Dreams on his way to the Piggy Palace this morning on what seems to be a pair of roller skates!

As gossip of the awesome new pork-pulsion system spread like wildfire, the minion pigs formerly employed to carry  His Majesty Smooth Cheeks the Super Sized Lazy Overlord around in the Angry Birds Toons episode “Sneezy Does It” are furious over being retrenched and have staged a protest against Piggy Island’s rapid modernization. *

* Based on true events in the Victorian Age, where discontented farmhands, made redundant by the introduction of farm machinery, plotted to destroy the infernal contraptions that made them unemployed. What ever happened to “Keep Calm & Drink Tea”?

In response, His Most Witty Majesty replied with a catchy one-liner that is sure to become an internet meme (once Pigineering invents the Internet on Piggy Island):

The King Pig then ordered the Corporal Pig to “Let Them Eat Cake” then retired to continue with his 23rd meal in the day. 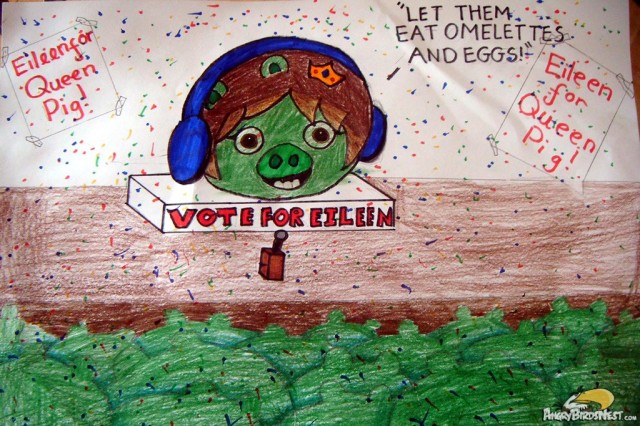 Pigineering is a Facepork community that specializes in wasting King Pig’s taxpayers’ money to build ridiculous contraptions only to crash them 30 seconds after takeoff. And you wondered why Piggy Island is still in the Medieval Age.

“We Never Fail to Fail!”

Engineering has never been this “epig”… maximum piggy pun intended! Check out our incredible bacon adventures on Facepork, Trotter, and YouBacon!

The vast quantity of sarcasm, cynicism and just plain down to earth humor in one post is amazing. What a great writer. Oh yea, the skates are great.

I wish I could get into the good guy’s (bird) side so I can write for them too but alas I am a bit stuck in King Pig’s Office at the moment :)

Totally Agree ~ Cleverly entertaining as I have come to expect from Pigineering !!!

Haha @Coup D’Bacon Tart :)
love the sarcasm!!
One more thing: King Pig made it to the end lol