Angry Birds Nest is 3! The Story Behind One of the Largest Mobile Gaming Communities 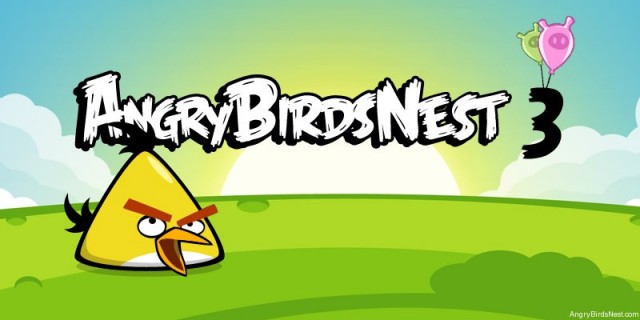 A BIG thanks to @E-Star for the awesome new logo!

It’s hard to believe that Angry Birds Nest has turned three! I wanted to celebrate by sharing a quick story of how ABN came to be, as well as thank those who helped us get here.

The Origins of ABN

It all began around May 2010 with a harmless addiction that my then two-year-old son and I had to — you guessed it — Angry Birds. As we progressed through the game our addiction only increased and we — alright I — set our sights on 3-starring every level and finding all those yummy Golden Eggs. At the time there was really no single source of Angry Birds information and walkthroughs, so to get the help I needed to impress my son I had to bounce all over the web. My goals to begin with were simple: offer a one stop shop of Angry Birds information, guides and walkthroughs.

I could have simply starting building ABN, but I really wanted to go about things the right way, so I sought Rovio’s blessing. I emailed them asking if they would allow me to create a fan site. In the email I included some examples of my past work, a bit about my background, and most importantly, a picture of my son wearing an Angry Birds shirt at Disneyland (marketing at its finest!).

The email address I sent my query to was generic, so I honestly never expected a reply. Fortunately, to my surprise I actually received a nice response from Peter Vesterbacka, Rovio’s CMO and Mighty Eagle (@pvesterbacka). He basically said, “Go for it”. A week or so later I sent him mockups of the first iteration of AngryBirdsNest, and a week or two after that, it was live. The screenshot below is one of the first iterations of ABN. 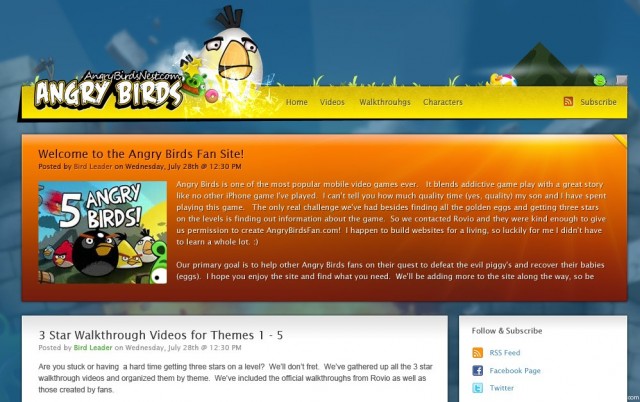 In the three years since we first launched we’ve obviously grown quite a bit. While we are still a site of fans — and always will be — we are most definitely a full-fledged community (and one of the largest gaming communities on the web). We now cover all of Rovio’s games and offer a lot of really cool features, including: leaderboards, challenges, ranking, badges, and so on. We are a true interactive gaming community.

Before I go on I want to take a moment to thank all of you. Quite often we thank Rovio for all the support they’ve shown us over the years, but it’s rare for us to thank the entire community. That’s actually sort of odd, because without all of you the site would be rather boring. In addition, I also want to thank our loyal admins and moderators who have stuck with us through thick and thin. Each admin has a fun bio on our team page, but let’s call them out in order of appearance.

Thanks to you all! Thanks to all you loyal flingers! And thanks again to Rovio.

With the story now told I thought it would be fun to finish off this article with a short Q&A between myself and my alter ego @birdleader (BL).

BL: How did you first come across Angry Birds? How much do you/did you play it?

Simple. One day I was browsing the Apple App Store looking for some family-friendly games that my son and I could play together. I noticed this silly looking icon with a bird on it and thought I’d give it a go. We loved the gameplay and fell in love with the characters. Angry Birds was a game my two year old son could play easily on his own, but also had a level of difficulty that I enjoyed. The Golden Eggs were also an ingenious touch, as they added an additional layer of depth that required the player to actively seek answers. This increased engagement and when found offered a satisfying reward. Now my 3-year old daughter is playing the game, so you know Angry Birds is truely something unique.

BL: For all the top players on ABN, do you notice any common trends? gender, age, location? Or are they from all walks of life and interests?

You would think so, but Angry Birds really transcends generations and borders. Some of our most dedicated players are a bit older and have established careers: doctors, lawyers, you name it. That is not to say we don’t see a ton of amazing players who are a younger. We do! All of us share a common bond and it shows on The Nest. Our moderators work very hard to maintain a family-friendly site that is open to people of all ages and backgrounds. We also strive to keep the site accessible to both seasoned Angry Birds players and newcomers alike.

BL: How do you ensure real scores on ABN, where Game Center is so full of cheats?

At the time of writing we have about 2.2 million scores entered on Angry Birds Nest — all of which were entered by hand. The power of our site is we have the ability to build in many checks and balances that more automated leaderboard systems can’t. Users also have the ability to flag scores that looks suspicious. The power of community enforcement can’t be underestimated. It doesn’t hurt that many of the best players from around the world frequent Angry Birds Nest and have their scores entered. This allows us to set benchmarks and more easily compare scores across individual levels. No system is perfect, but we work very hard to keep a level playing field.

Takin’ it Back to the Old School

Below is an interview with Peter Vesterbacka from way back in August 2010. It’s a long interview, but it’s a neat retrospective on how far things have come. He talks about the Mighty Eagle, IAPs, Mario, toys, and much more.

For some reason, I’ll miss the old logo…

@absure The old logo really wasn’t that much different than this one. This one is just much crisper thanks to @E-Star.

My thoughts exactly @birdleader but maybe @absure means the new header? (not sure if the post was before or after you updated the header)

Perhaps he’s referring to the “old old” header — the one from the 2010 image in the post?

Haha, most likely. That header was actually quite challenging to create at the time. Making the glass look realistic while also having it be clickable was not easy (back then).

It will be a little hard to get used to the new logo, because I’m a member here for one year and I’m used to the old logo. (Why am I so emotional?)

Well now I know how it all started!
Three years! Wow. Third time’s a charm, as they say, except I don’t see much that needs a little charm.
Anyway, I guess it is pretty amazing how much the site has improved in only 3 years though.

Happy Birthday ABN! Rally have come a long way…… Thanks for a great site.

sorry wasn’t here to wish you guys that day…

In the interview, who are the three? names please?

@Lamia I found their name on YouTube Description :
Ben, Dion and Peter Vesterbacka (The Mighty Eagle) ;)

So sorry wasn’t around on the day to wish ABN a very Happy 3rd Birthday – real world ( the place the laws of physics demand I spend time when not in the nest!) has taken over for the last few days but just catching up in BP and saw E-stars link! Had to say a huge Thank You to @birdleader for your remarkable creation! Just love it and have made so many good friends! It is so nice to be able to pop into the BP and sit in my rocking chair and chat! Thank you also to our amazing admins @amslimfordy @sal9 @fujitoast and @e-star for giving so generously of your time & talents! Love it! Love it! Love it!

Love the new banner on the top!!!

Today the top banner on the PC version on the site changed!
Before that it was on Iphone.
In both cases, it’s awesome. Live the sardine can appearing when the cursor pass on ME.

@joeyba actually it changed on all platforms on the same day. Guess the refresh of your PC just happened today. fyi the sardine can was already there in the old banner :D
Glad you like the new header :D

@E-Star, weird cause i turn my pc off every night. The refresh happened just today though.. The sardine can I never noticed before lol

all i can say is thanks bird leader…. this site is the best. May this site continue to thrive