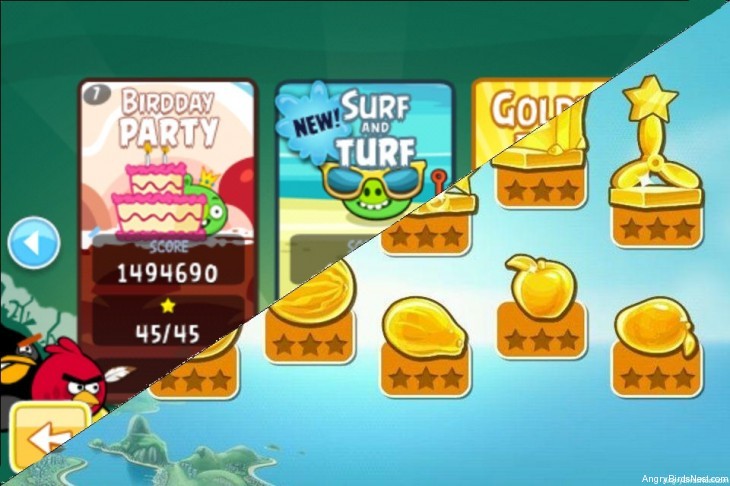 Today is a good day for users outside of Apple’s sphere of influence. First, Android users (via the Android Market and Amazon Appstore) can enjoy the first 15 levels of Surf & Turf, now available in Angry Birds v2.1.0. Furthermore, PC users now have access to the Trophy Room bonus levels in Angry Birds Rio v1.4.4. Finally, Mac users can now play Cherry Blossom levels in Angry Birds Seasons v2.3.0. We expect that these updates will continue to circulate, so keep an eye on your App Stores if you have not received them yet.

Most of the details about these updates were included in earlier posts, including links to walkthroughs and leaderboards.

A quick word of caution. The Angry Birds leaderboard has been updated to include Surf & Turf. Please don’t enter your scores on the Surf & Turf Facebook leaderboard unless they were actually achieved on Facebook. We are looking to keep the Facebook and ABo leaderboards 100% separate.

Where is Surf and Turf for PC?

Android users had to wait for about 20 days to get it after iOS, but I hope that the wait is not that long for PC users.

By the way, there are no cutscenes for Surf and Turf on Android. Is this a bug or is it normal?

There aren’t any cutscnes for S&T on all platforms, completely normal :)

There are for facebook…check it out. The cutscenes are a sort of Rio and Space like…like a comic book.

You might want to check it again. I just got S&T for ABo on PC

YAYYYY!! I was checking some of the markets this morning. Nice to see Mac getting updated.

wat will be next

Great! I’ve been dreading to play the Surf and Turf on Android, and Trophy room on PC. :D

is a nook and kindle symbian. If so my friend nook’s Rio got the trophy room today

No, NOOK runs Android OS. Kindle is its own OS, I believe Linux.

So NOOK has surf and turf

Are the waits for pc updates always this long? (suffering from lack of new levels)

I meant on ABO… it’s been a month since surf and turf come out on ios, right?

They may not bring Surf & Turf to PC, since it can already be played on Facebook on a PC for free.

Oh… Good point. I hope they update it anyway though, the power ups kinda mess up the leaderboards on Facebook.

But what about those PC users who don’t have, or don’t want to create a facebook account?

It is only speculation on his part. Rovio has not said much one way or another.

Check my reply above.

You mean the original Angry Birds v2.1.1? We have this listed above already.

But on my galaxy phone its says new update on news on angry birds
See this screenshot from my phone :

I had that message as well earlier today, but now it is gone. No update available yet in the Apple app store.

But that’s not what you said. You said Space was updated to v2.1.1 which cannot be true. Yes, the concept of an update for Space appeared in Rovio News, but no update has landed anywhere yet.

Finally! Thanks for telling me that @kun-parekh!

Yay! 36 days between the release of this on ios and the release on pc… I wonder why they don’t release them all at once?

As mentioned on the ABO Leaderboard comments section, I too have just received v2.1.0 update for PC. I have the disc and the update was given at no charge. If you have bought ABO on line, (for PC), do the updates/additional games also come free of charge?

Yes. The updates are free whether you’ve brought it from the Shop or by using a CD

Yes, all updates are free. This post has been updated already.

Tried to download the Surf and Turf update for PC, but it says: Oops! Google Chrome could not connect to drm-pc.angrybirdsgame.com

Question: Did the Trophy Room get downloaded to everyone’s Rio game or only to those who obtained all the 3 stars and all the trophies?

Note that it doesn’t appear on-screen like a typical episode. Rather, enter your “Awards” page. The episode name “Trophy Room” was actually created by yours-truly and Rovio has adopted it themselves.

Whoa! You created the name? That is cool @amslimfordy!

Yes I did, and I’m very proud of that. I was on the phone with BirdLeader when we heard about this update landing on Amazon. After a long conversation about what we should do (since none of us have Androids), I coined the name and he liked it. Apparently Rovio did too ^.^

I’m having a bit of trouble with ABO for PC. I launch it, but it doesn’t tell me there’s an update.

You can manually update by downloading the new .exe from download.angrybirds.com. All progress should be safe, but you can back those up manually as well (instructions).

It worked. Thanks Kun, Slim.

This update has made ABO messed up! There is no cutscene in it, and there is no golden egg(maybe).

If you refer to the release post that is referenced here, that’s just the way it is. There are no cutscenes in the full version, and no golden eggs, likely because it is a non-sequential episode.

When I updated ABO v.2.1.0. on PC I searched through the files and I saw the “Lightning” button as well as the power ups.
Will this be in future updates?

Haven’t heard anything, but I don’t think powerups will make it to the original app.

The King Sling and Sling Scope sprites are in ingame_birds_2. I suspect Rovio IS adding powerups to original.

There are also Roku instructions in the PC files. What is present is not indicative of what will happen in time.

You’re comparing apples to oranges. The Roku instructions are there because all platforms use the same images. That doesn’t mean that powerups won’t be added in the future. I’m not saying that they definitely will be added, but it’s certainly a possibility.

I think you answered your own question then. All platforms use the same images. Facebook is a platform.

Doesn’t apply here. Does Facebook have Orange Bird? The answer is no. And besides the point, the powerup icons are yellow, they’re blue in Facebook, the icon for The Mighty Eagle has a sardine can in Facebook, but it has his eye in the image files.

I still don’t see your side though. I claim those image files exist in PC data files BECAUSE they exist in the Facebook app. The backgrounds and everything can be considered separate.

Never mind what I said about Orange Bird, I sliced up my own point there. But what I’m trying to say is that even though Facebook counts as a platform, ABO and ABF are different builds. If they were the same we’d find shop buttons, avatar pieces, etc. in the image files.

Perhaps this image will help you get my point:
http://img42.imageshack.us/img42/5930/imagehf.png

I understand, but background colors are not too significant. Otherwise, all looks the same as Facebook’s data files.

True the Facebook be isn’t there, but I still think it would be very over-the-top to change the original app after over 2 years.

oh come on,more coming soon…. why doesn’t Rovio give us all levels at once

15-level releases have been the norm for over a year. It shouldn’t come as a surprise.

there an gold egg in surf and turf?

I just saw an eggbomb in the PC Files,does this mean that ABFacebook will add this powerup in the next update?

Since when these two update called “Surf & Turf” and “Trophy Room” begin? I’ve do it at any time, but can’t be. I’m only just download across torrent. The Updater app at all Angry Birds games was unworkable. Someone who know how to make updater app workable? Who knows why I can’t go update?

Where did you buy your game?

Download from the Angry Birds shop, or from another site?

I download from Angry Birds shop. By clicking download trial. Because out of time/no activation code, so I has two way, enforce to another site by download again another site or I have to buy them two (ABo and ABR).

Sorry, but as i told you, we do not support torrent users. Take care.

That’s exactly why we won’t support you any more.

I’m sorry, but we will not help you if you are using a torrent app.

I don’t know whether this was present in earlier updates or not, but in ABO v2.1.0 PC, on the main screen where all the 3-star trophies and the birds fly around, clicking on a flying bird makes it produce it’s noise.

They are very ticklish, aren’t they! ;-)

Yep they are, and it is very fun to make them make noises on the main screen ;)

I love it when that happens! But they’re so hard to click; they move so fast sometimes!

After installing the game on loading screen i get an error
“?:0: attempt to compare number with nil(call stack not available)”
what should be the problem?

@sal9 I can’t seem to reply to your post above… weird.

the thread seems to be ok, you use chrome, right?

I’m using Safari. When I try replying, it looks like it “refreshed” the page, then any further attempts are detected as duplicates.

Maybe it’s the browser? I’ll try using another… thanks for the help!

@kartflyer
What are you going to say?

Was just going to tell you:

“You could reply to people in that post, if you didn’t know. It prevents a lot of confusion.”

@sal9 I think I figured it out, placing 2 links (one for Carl’s link and another for @ carl) in that one post must have caused the server to delete my comment.

Hey @kartflyer, it looks like the auto-spam catcher grabbed those posts (very strange). Want me to find one and pull it back?

@amslimfordy Weird. You don’t need to anymore though, I just finished stating my point in my reply to Carl above. Thanks anyways!