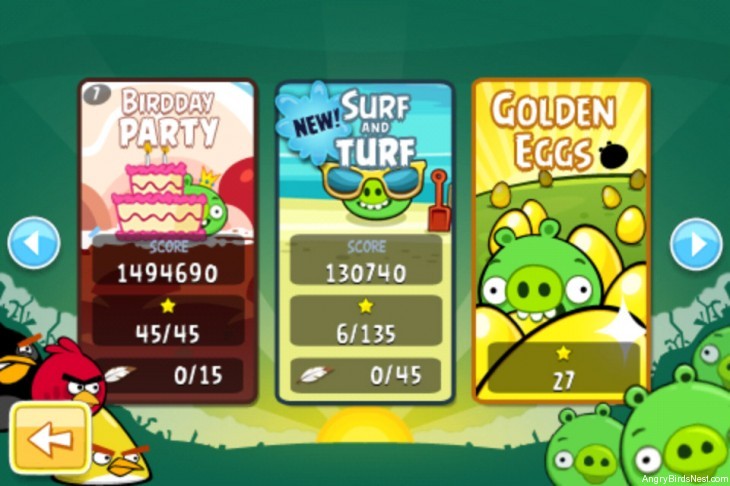 What a week this is turning out to be! Fresh on the heels of the Angry Birds Rio Trophy Room update for iOS comes a surprise Angry Birds original update for iOS that includes Surf & Turf, which was previously only available for Angry Birds Facebook (original post here).  More platforms should be receiving the v2.1.0 update soon.

Lastly, I should mention something that you likely already know. The MASSIVE Angry Birds Space update is only two days away. It feels like Christmas in March!

My Android was new.
So can I ask a question?
How do you update Angry Birds through Samsung Android?

On either the Android Market/Google Play, or Amazon, Launch the market app you downloaded AB with and click My Apps in the menu. (The menu button on your phone).

Then check for updates.

Absolutely disappointed there is still no Surf n Turf update for Android.

They’re on their way.

One reasons is that MAYBE they are trying to get Mighty up and running :) yay

There is no evidence of this, but one can hope.

The update has finaly landed on the Android Market/Google Play!!!!!! :)

MUFC, thanks, I saw your post and turned on my phone, and there it was!! I had given up on getting the update! Thanks for keeping your eye out for it! :)

I’m guessing that they’ll add S&T to pc when the other 30 levels are out.
Yet I don’t understand why they added 15 levels and 15 coming soon levels(smuggler’s plane)To ABRio!Is it because there are 30 coming soon levels instead of 15?Who knows.

All versions have 30 levels of Smuggler’s Plane, to my knowledge. May want to check your AppStore for an update.

I know that,i meant when it was first released months ago with only 15 levels with another 15 coming soon levels.

15-level releases has been the norm for Rovio for well over a year. It shouldn’t come as a surprise.

Since Surf and Turf is out for iOS, making Mighty Eagle walkthroughs must be more ‘easier’ as the worry of spending Eagles in AB facebook is not there. Can you create TD video walkthroughs as they can be used for AB facebook as well ?

The behavior of the Mighty Eagle is a bit different between Facebook and iOS. I didn’t really have any issues obtaining feathers on the iOS version of Surf and Turf, but I would gladly offer advice on any levels that are troubling you. We have a topic in the forum as well, where you can make Mighty Eagle walkthrough requests.

Ok…just saw that thread..but I am just curious as to how it’s behaviour is different between facebook and iOS.

It looks to me that the Eagle “bounces” differently. Also, the destruction thresholds may be different (I haven’t confirmed that, but I believe it).

The only thing I dont like about this update is they took away RovioChannel.

is there a way you can play surf n turf online? cause i don’t have a Facebook and I’m not allowed to get one… just wonderin

The graphics of Surf and Turf seem to have more depth and clarity than the previous AB levels in the original. The colors especially the blues are rich.
I have gone back and played a few levels to see if I can improve the scores and appreciate the graphics even more than when it was first viewed.

Does Google chrome Have surf’n’turf for pc?

No, Google Chrome only has Poached Eggs, Mighty Hoax, and Danger Above from ABo.

I got chrome now so I know.

Has any timeframe been announced for the next two installments of S&T?

It now on nook

It landed on Nook in mid-April.

this came out on March 20th…and still,the other parts of it still have “coming soon”*sigh*

We don’t have that information, sorry.

I do not understand….my angry birds surf n turf has no update….on iPad or galaxy3 phone, or Mac…..why has there been a ” coming soon” for months and months? Either I am missing something, or I am the one who is “Angry”…..!!!

Sorry, I should have read more of the comments. So, there is no update yet? Someone should inform them not to tease us like that, it’s kind of like the ” going out of business” sign that stays up forever!

I would go check your AppStores again. More levels of Surf & Turf have recently been released for iOS, Android, and PC.

Just in case you aren’t seeing things right on your iPad, the current version that was just released now has 30 levels of surf and turf, hence right now everyone is trying to improve their scores for the second installment of S&T. The last 15 will be the next update… or several from now… future update would be a better term. ;)