The Angry Birds Seasons Wreck the Halls update (v2.1.0) is now available for iOS, Mac, PC, Nokia, and Android via the Android Market and Amazon Appstore. Other platforms will be getting the update very soon. This update — which we first leaked about two weeks ago — celebrates the Christmas Season and is very similar to Seasons Greedings in that it counts down like an advent calendar with one new level per day!

Update: Seasons HD (iPad) has received a v2.1.1 update, which presumably fixes the loading issue on 1st generation iPad.
Another Update: HD v2.1.2 has landed and should fix the launch issue once and for all.

Rovio has also released a Gameplay Trailer (seen below) and a Christmas comic. Finally, there is a major update to Chrome Beta, so be sure to check out these other posts as well.

No shortage of Angry Birds this December! Enjoy! 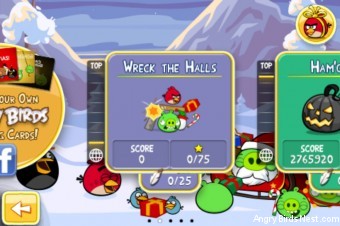 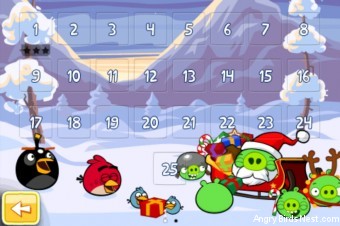 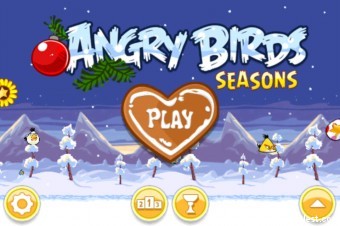 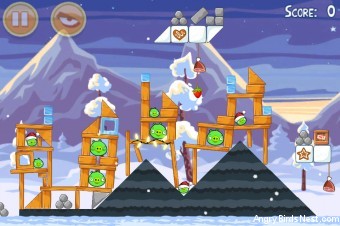 asof 12/12 AB seasons wll no longer boot up on my IPad. Whatisgoigon?

Is there a golden egg yet for this update? If so when will it show up in the seasons golden eggs walkthroughs

Have not found any yet. And it will be added to the GE page the same day that it is found.

So far, it seems that the only Golden Egg will be for three starring all of the levels. Certainly no others have been discovered. If that’s the case, I wouldn’t expect to see a walkthrough until the twenty-sixth. After all, FujiToast deserves his Christmas holiday too!

The only? Keep in mind, the Golden Egg in Seasons Greedings was in level 13. The one in Trick or Treat was in 3-2. And the one in Ham’o’ween was in 2-2. Certainly Rovio has hidden Golden Eggs late in the episode, and there’s no reason to assume otherwise for the time being.

Also 3-starring the level does not give you an golden egg, for Wreck the Halls the “Big Cookie” is unlocked for 3-starring and some people have reported of a Golden Egg.

As to the presense of a Golden Egg in the Big Cookie level, while indeed possible, if some people have reported it, I tend to discount such reports, as that level will be locked off until three starring the last level on Christmas Day, and any report comes from a cheater using a hacked copy of ABS.

Thus, it could be true, or it could be disinformation, disseminated anonymously, for reasons we won’t ever really know.

In my defense, I did say: “so far,” as I know it hasn’t happened yet, and I know it could in one of the remaining levels. But I’m going to refrain from prognostications, as to when, or even if, a Golden Egg will appear, as my record in that department really stinks.

Agreed that hacked versions could also report fake Eggs or something.
Isn’t it stupid that people cant actually buy such a low-price game instead of damaging their devices.

Wreck the Halls is available for Symbian at last

update is available for nokia too! bug wich wasn’t showing stars on facebook/twitter levels seems to be fixed too.

Did you update via the game or Nokia store, I did mine via the store and had no problems.

In game update link seems not be yet updated, but you can still download update for symbian at http://update.angrybirdsgame.com/symbian/angrybirdsseasons_v2.1.0_update.sisx

How do I get the update v2.1.1.I’m still not connecting to Seasons at all. I have generation one IPad and it doesn’t appear on the app page.-see above

If it’s not showing in the app store, perhaps you already have 2.1.1. Rovio is working on another bug fix though.

what do I log into to update the levels. day one and two loaded but I can’t get days 3 on to open. Thanks

So long as you are connected to WiFi, you can simply click any level (through 13) and it should download the level file.

Has anyone seen the group of birds fly on and off the screen in Wreck the Halls level 3? It happened for me once, but I don’t know how, and I want to show my son. Does anyone know how to do it?

Are you perhaps on Android? Some users have reported a similar “ad” in the Android app.

Yeah, it happened again and it was an ad. Thanks :)

A golden egg is available in todays level (it is encased in ice if you zoom out)…FYI, it appears on the left of the Golden Egg picture I posted earlier in this thread: https://www.angrybirdsnest.com/angry-birds-seasons-wreck-the-halls-now-available/comment-page-2/#comment-67882

I knocked over the golden egg twice, but it didn’t ‘register’ — e.g., no large golden egg showed up on my screen.
Egg is on the top right when you zoom out.

Just keep trying. It’s enclosed in ice, so it’s got to break free.

I can’t figure out if you are saying that I am lying in the screenshot I posted or not. I can guarantee you two things in life:

As to if it translates into a level at the end of the month, that I cannot say, but the egg is certainly there when you change the date forward.

No, no. BirdLeader was just telling pat to keep trying.

I’m pretty confident that today’s Golden Egg will be the only one there, aside from getting 3 stars on every level.

Not quite. Read more here

Isn’t the New Year’s Egg a rumor? It’s still possible as a download like the advent ones are now, but I’ve just checked the levels inside the app, and there are only two for this year’s Christmas…one for today’s Golden Egg, and another for 3-Starring everything.

I tried it myself — I set my iPhone time to 3:01AM UTC 31 Dec. and the Egg appears on-screen. However, the level file does NOT exist. If you try to open the egg, it says to wait 15+ days. But indeed, the Egg exists.

Very cool indeed…looks like it’ll be a downloaded one. Thanks for the info.

Look like Rovio made sure that we do not open the egg to early.

Im going to try it out for my self

you have to hit it directly with a bird, you can’t just knock it over. :)

@Lamia: just make a copy of your highscores.lua file and your settings.lua file and copy them to desktop and restore if it says to wait a year.

Advisory Notice: Users are having issues unlocking new levels. In all likelihood, it is a hiccup in the server. Rovio has been informed and we hope the issue will be fixed soon. Nothing can be done by the user besides exercising patience.

Sorry about this, we’re on it. Will be fixed as soon as possible!

:-) Thanks man, you’re the best. Servers can be mean sometimes.

But where would we be without them?

– If you press the “?”-Button and watch the instructions, the orange bird is listed twice and Mighty Eagle is missing.
– On some devices the 4 new achievements are still hidden in Game Center
– The small parcel in Seasons Greedings has always a shine, as if it was just earned. Even if you open the link, after restarting the app the shine is there again.
– On the pause screen of the small moonkace level in Moon Festival, it still shows the wrong icon.

And I’m sure there are some more bugs which we have not yet found or which are already mentioned in the threads above.

I still say it’s bug-free. These things are not significant and don’t affect gameplay or anything like that.

Then the thimg to do is to email Rovio @ [email protected]. If they don’t know about them, they can’t be fixed.

Today – 4 days before the end of the episode – I received a newsletter from Rovio which announces the “new” Wreck the Halls episode.

Here is a list of Angry Birds Seasons to make.

Hogwash. If you want all of those, submit your application to Rovio; they’re hiring. But expecting monthly updates is a bit selfish, IMO.

how can we understand “meet the big pig?”
a boss level like in rio? hope not !
soo excited for tomorrow :)

I have all levels 3 starred so far. What about everyone else(I assume most here have as well)? Can’t wait for tom!

Well I now have all 3 stars on all 25 levels in Wreck The Halls (and the 3 star pig head, the 1 golden egg)…Plus there is still the other golden egg that supposedly opens in 5 days, 23 hours and 15 minutes.

Honestly, I was kinda disapointed by the “Big Pig” boss fight. Got all 3 stars and beat the Pig Cookie level. Look forward to this supposed Golden Egg that opens soon.

when will it be available as an offline version?? i cant play it coz im rarely connected to internet..plss reply ASAP.! tnx

Wreck the Halls was finished on Dec. 25. If you connect to the internet now, all levels may be unlocked for you to play.