PC & Mac Users: Additionally, there are only ten Golden Eggs since PC & Mac do not have the Twitter levels. We do not know if these levels will added to Mac & PC, but it seems doubtful. Therefore, Mac & PC cannot obtain Golden Egg 19 (Level 1-16).
Update: In the v2.5.0 (Back to School) update, the Golden Egg screen for PC & Mac was updated to match the mobile screen. Therefore, the image on the right is only for PC/Mac users running a version lower than v2.5.0.

#11 – Level 1-6: Zoom out. The Golden Eggs is on top of the hill on the far right side of the screen. Fling a yellow bird at just the right angle then hit a speed burst to hit the Golden Egg (→ see image).

#13 – Level 1-8: Reveal the Golden Egg by hitting the TNT under the slingshot. You can do this by bouncing a red bird off the checkered wall directly under the first concrete block. Now bust that Golden Egg! (→ see image)

#14 – Level 1-9: Fling a bird backwards towards the bottom left part of the level (off the screen). After you hear an explosion, you’ll see the Golden Egg appear on the far right hand side of the level. Be sure to zoom out. (→ see image)

#15 – Level 1-12: Using the green bird destroy the donut on the right side of the screen. The Golden Egg will then drop down and start swinging back and forth. With some luck and good aim use one of the remaining birds to hit the Golden Egg. I actually found it easier to hit it on it’s way back (swinging from left to right). To each his own though. (→ see image)

#16 – Level 1-15: This one requires three steps and is probably the most difficult to obtain. First, you have to break the patch of grass behind the slingshot. After you do a round block of wood will appear on the ground in front of the slingshot. Bust that piece wood and the Golden Egg will drop down and start swinging around. Now you have two chances to hit the Golden Egg. Good luck! (→ see image)

#18 – Level 1-10: Break the patch of grass beneath the slingshot (the one on the side of the hill). The egg will swing down from the top of the screen. (→ see image)

#19 – Level 1-16: Flashback! Break the four-leaf clover that sits to the left of the slingshot and it will trigger the block underneath the Golden Egg. (→ see image) 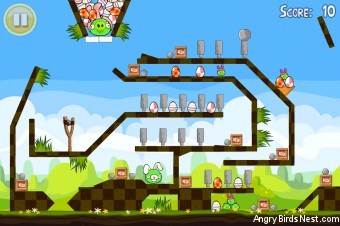 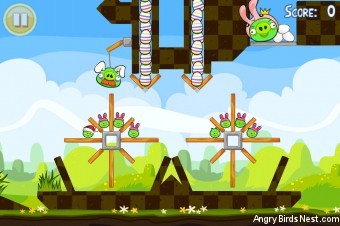 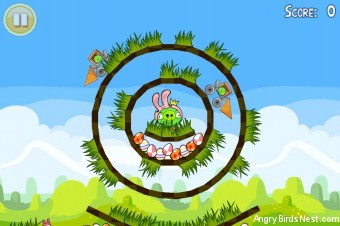 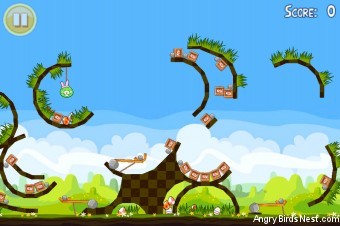 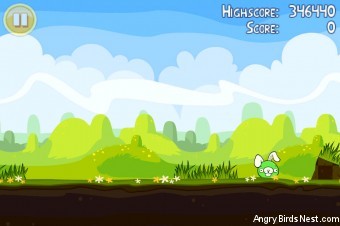 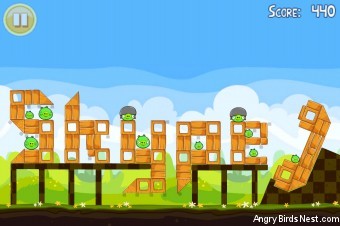 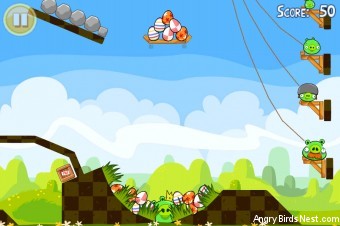 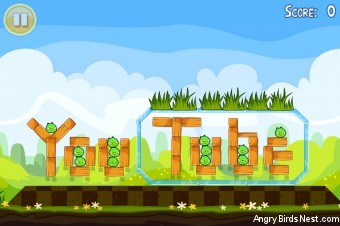 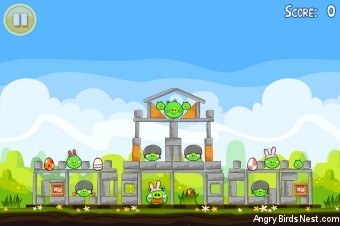 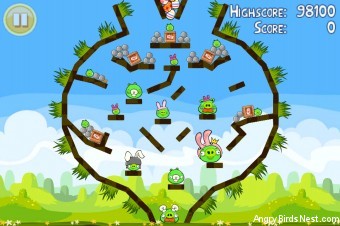 I assume you are using either Mac or PC? The Facebook/Twitter levels do not exist for Mac/PC at this time, but they will likely be there soon. Until then, you cannot obtain the Golden Egg in Easter 1-16.

In ABO the Facebook levels came in maybe 2.00 or 1.6.3.1 so i should expect the levels to be in maybe coming versions

The Facebook levels were added to ABo-Mac/PC in v2.0.0. Yes, we think these will eventually be added to ABS-Mac/PC, but there is no ETA for that.

There are ten GE in PC Easter Eggs.

you probably mean 9 GE and one Big “colorful” Egg.
the tenth egg doesn’t exist yet because the facebook levels haven’t been released on mac/pc platforms. on mac at least.

I just found another. On level 1-4 in the patch of grass closest to the slingshot agaim.

is their anything angry birds can’t do

I’m pretty sure you do need to do the twitter levels as well! :)

Thanks, now I have all 3 stars and all golden eggs! Thanks for the walkthrough!

Why are all my golden eggs on this level missing?

Missing? I’m not sure. Can you provide some more details.

I have another strategy for the Golden Egg #18.
You just need to activate Mighty Eagle and sling the sardines tin to random. When it slams, the egg should fall and hit the ground, thus obtaining it.

Argh, I thought that because when I used it the ropes fell from the top…

Yes, but once you call for the Mighty Eagle, normal gameplay is halted.

In the page where it shows all the golden eggs only 3 of mine show even though I already got them. When I go back to the levels that have the golden eggs there is no golden egg to retrieve.

I’m not aware of any bugs. Many of these Eggs are not visible at level start, but rather are unveiled by breaking things like tufts of grass.

Okay my game must have re-set when it crashed. So nevermind. Sorry to bother you.

I was able to get golden egg #16 in two steps. I followed the first two steps above, but on the second step, I aimed the white bird high and to the right, so when I dropped the egg to hit the wooden ball, the white bird shot off the screen and the golden egg fell into the grass just to the left of the wooden ball; achieved! Much easier than trying to hit the golden egg while it swings around; however I don’t know how much luck was involved in this two-step method.

I’m using the google chrome version of easter egg. I’ve got 3 stars on all levels and the bonus rounds. So am I missing something? I don’t see anywhere that I’m doing something wrong. Please Help!

There are no Eggs in the Chrome Version.

OK,My bad! It would help if I read everything at the top instead of glossing over things! PC and MAC users can only hope the Rovio will add the “Twitter’ levels some day(sooner than later).

Not sure how I did it, but I got an egg in 1-10. It descends from the sky on a swing. Seriously- no clue how that happened but it did. :)

I have three stars in every level in the first 15 levels, but the three extra levels (16, 17, and 18) will not unlock. I am on a verizon thunderbolt.

Not sure what you mean by “cannot access” GE 19. It can be seen in level 1-16 of Easter Eggs in the top-right corner.
Obtainment of Golden Eggs does not effect the unlocking of the “Big Egg”. You must 3-star all 18 levels (15 levels on PC/Mac).

sorry, don’t know if this was ever mentioned before… but just to tell, as of v2.5.0 (Back to School), i just noticed that the Golden Egg selection screen in my PC is now the same model as “mobile version” pictured at the top of post above… except the 19th egg of course…

Have you checked the Golden Egg page? Your Eggs may be in a different order. We aren’t really familiar with the PS3 version.

I don’t have one egg, and one golden egg level.
I don’t know what to do… :(
This egg was in the grass. I caught it with mighty eagle, Egg disapears, there is no egg- This makes me crazy! :(

You cannot obtain Golden Eggs with the Mighty Eagle. Try restarting your device and it should be back.

In the v2.5.0 (Back to School) update, the Golden Egg screen for PC & Mac was updated to match the mobile screen. Therefore, the image on the right is only for PC/Mac users running a version lower than v2.5.0.

We don’t claim that these levels are available for PC. We specifically say that PC does not have the 19th Egg.

What does ABN moderation actually mean by the sentence “In the v2.5.0 (Back to School) update, the Golden Egg screen for PC & Mac was updated to match the mobile screen.”? I do NOT think I have misunderstood the sentences related to the update.

PC & Mac Users: Additionally, there are only ten Golden Eggs since PC & Mac do not have the Twitter levels. We do not know if these levels will added to Mac & PC, but it seems doubtful. Therefore, Mac & PC cannot obtain Golden Egg 19 (Level 1-16).
Update: In the v2.5.0 (Back to School) update, the Golden Egg screen for PC & Mac was updated to match the mobile screen. Therefore, the image on the right is only for PC/Mac users running a version lower than v2.5.0.

The “update” applies to the crossed out material.

How do you break the golden egg on the first twitter level? (Seasons-Easter-2-1)

The level was originally numbered 1-16 see that walkthrough will work.

Thank u on this guide it totaly helped me.i just dont know how to got last egg becuas there is no 1-16

I play ABS on my iPhone and even though I got 3 Stars in worlds 1 – 15, I can neither unlock the three extra levels nor the Big colorful Egg. What can I do? This is annoying ='(

The “Big Egg” won’t unlock until you 3-star levels 16 thru 18 (perhaps now numbered 2-1 thru 2-3). To unlock those levels, click the giant Twitter logo in the middle of the 2nd screen.

@AMslimfordy I feel really stupid asking this, but where do I find the Golden Egg display screen in Seasons? Dang, I must REALLY be blind…

@bonneypattycat Do you mean a landing page for our walkthroughs (see @sal9) or in-game? If the latter, GEs appear on the rightmost page within the desired episode. So for example, the rightmost page of Abra-Ca-Bacon has it’s GEs.

@sal9 @AMslimfordy Sorry, I meant in-game. I looked for the right-most screen in several episodes, it is not the Golden Egg screen shown above on this page, but the 3-star bonus levels.

@admins Not only was I lost in Seasons, I was lost where I was on ABN walkthroughs. I think I got it figured out now. I think the eggs are not showing up because I haven’t found them yet. I forgot they don’t appear until found. I guess I have some searching to do. Thanks for your help, and sorry for the bother!