While users with the full version of Angry Birds Seasons can enjoy the Summer 2012 episode Piglantis, Chrome users can enjoy last year’s theme. Angry Birds Chrome has been updated to v2.0.0 and now includes Summer Pignic as the latest Season! To be safe, be sure to backup your progress before proceeding.

Included in this update: 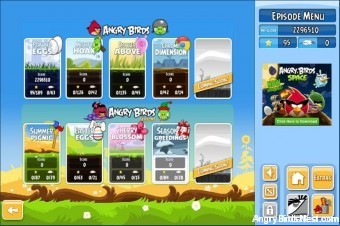 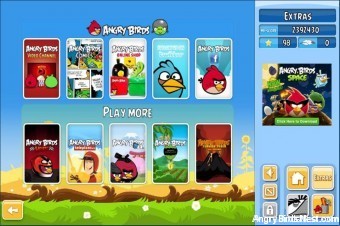 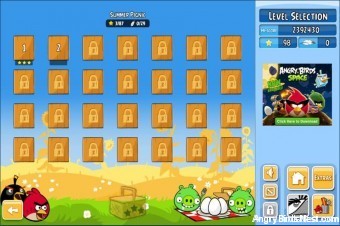 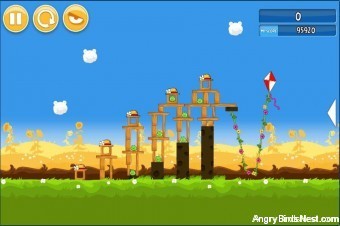 It seems that scores are now saved online and not just to the local storage. Also the full screen feature is pretty nice.

man… croome get all the fun “extras”

Second that! I does really hope those ‘fun extras’ are added to the mobile versions :(.

I was just doing work on my laptop, looks like I need to get cracking, so many games, so little time! Lol :D

yay! chrome works for me!

i have chrome, but somehow i dont have everything because all i have is poached eggs and chrome world. :(
how do i stop it?!?

All you need to do is update … you’re missing a lot.

Rank: Flinger with 0 points
By Bioshroom (@)

Either that, or you’re not logged in.
You only get Poached Eggs if you don’t log in to Chrome.

i WAS logged in. and if i was’nt, i’d not get chrome demension, wich i also got

Very-very good-looking. I thought Rovio totally forgot about ABC while focused on Facebook, but I’m glad that I was wrong. And yes, cloud saving finally!

One thing seems certain. Rovio appears to be bringing the overall look of different versions to a degree of similarity. Not that I’d call it a bad thing, I’m just noting what I’m seeing.

@truckdriver I agree TD with the similarity but what Rovio appears to excel in is providing the different environments with their unique influences on the bird’s travel path to the pigs after leaving the slings. The actions of the birds in Space when compared to Piglantis are yes the same but some are different and all of it is just addictive in the good sense. This is a draw for me to keep enjoying and playing the games. I am curious of what “will they think of next” that excitment builds for the next update or new game. I guess that is the magnet that keeps drawing us back to play again for another day.

@wrw01 – sure enough. I too continue to both like what I see, and continue to anticipate, each new update.

Since the update, I’ve been having a lot of lag, specifically on Seasons. Anyone else having this problem?

I was just going to post that the chrome version is really slow and choppy for me, even on SD rather than HD. I also get Chrome memory warnings. I only have 2GB RAM. My bird has trouble laying eggs too.

It’s pretty difficult to get high scores when nothing works quite right.

better SD performance with Firefox than with Chrome, oddly enough.

I haven’t yet seen it, as I don’t have Chrome, but from what I’m reading here about performance, I think that Rovio might be going after MMORPG gamers, who’s computers have, on average, far more memory and processing power, than the typical PC. That includes maxing out RAM on graphics cards, motherboards with accelerators, overclocked processors, and so forth. Another factor is that most such gamers use ISP’s with the fastest Internet connection speed they can latch onto.

Granted, this is just speculation on my part, but it seems reasonable enough.

However, I think this is a good place for some old fashioned Windows advice: clearing your internet cache, removing temp files, cookies, up to, and including removing some applications from the Windows StartUp menu and System trays. I can’t offer any advice about your ISP, if speed tends to suffer, and in some locations, you really can’t do anything about that.

Yep, every since the update, I can’t activate the birds’ powers properly, resulting in another waste of a bird on the line. I enjoy the new Summer Pignic addition, but it might be a better option to fix lagging problems first.

All the same, I’m still curious to know which Pignic levels got dropped for the Chrome version.

It lags so bad I can’t even play. I have no idea what they did to make it lag, but it totally kills it.

What does the lock button do?

@blahalb09 nothing, just representing locked levels. you can unlock those by obtaining a star in previous level.

The lock button on the bottom right.

It is for locking the sidebar,so the sidebar will not hiding itself, but showing itself all the time.

I’m with the others here.. the WORST lag in the history of online playing.. even with the so called, “offline” version installed, it’s worse than any other online version of AB I’ve played yet. Makes FujiTV feel as if it were installed locally like Space!

I commented on the CocaCola version of AB.. that online version runs as if it were locally installed.. with no lag at all… and instance response time.

So.. whatever Rovio did with this new Chrome version.. well, maybe they should go back and look at the code.. compare it with AB CocaCola, and do something.. because now… Chrome is no longer even playable as far as I’m concerned.

I’m sure Chrome AB runs in HTML5,and the AB Cocacola runs in Flash.
As HTML5 is still not a defined standard yet, that’s why AB CocaCola runs better.

I have no lag at all.

The buttons at the blue area look like AB Facebook, don’t you think? Also, what’s the grey locker button?

Doesn’t Android 4.0 have Chrome.Can you play ABC there if you installed the flash player that is.

No, you can’t. The game checks what device you are on. If it’s a mobile device, it prompts you to download ABo.

I’m sure the lagging for Seasons is just an error and Rovio will update it so that it won’t lag.

For me, it doesn’t just lag for Seasons, it lags for everything, even the main menu.

I only have problems for seasons only and that’s it.

I’ve been playing the new Summer Pignic but when I got to level 16 I can’t play the level. When I click on a bird instead of bringing it back in the slingshot it scrolls over to show the rest of the screen. Has anybody else had this problem or know how to why it’s happening?

Try closing out your browser and giving it another go. Could have been an issue with the mouse buttons not registering.

I tried that but so far no luck. The other levels work fine except that one.

How do you get it? I am connected to the internet, and I can’t get Summer Pignic-Chrome.

Not sure what you mean that you can’t. Log into the Chrome app and it should say if a new version is available.

I have the same problem Andrea. I have been reading thru everything everywhere to try and find out why. Can’t go any further.

i also agree, i can’t do anything on level 16, and i have not been able to find any solutions, i’ve tried everything and it doesn’t work

Also stuck on level 16. Screen just scrolls from left to right and right to left. Once I accidentally managed to make one bird fall on the ground. I just get seasick when I try to find out how to shoot birds on this level.

I was using Firefox and when I installed Chrome it worked.

The full screen feature works best!
However,I’m not going to do again cause:
1:I still have to sign in my account.
2:Becomes unresponsive early

Thank you chrome. This is amazing. :)

Other users still could play those levels even there’s a performance lag.
Mine was worse! Loading only stops until 60%!
I’ve done everything suggested in the FAQ, but the result still same.
I’ve e-mailed Rovio about this problem and they said that they are investigating about this problem.

The update is awesome, I must confess it.
But, to be honest, I don’t like the new menu design. It’s like having a kind of picture gallery with interactive pictures rather than a game.
I preferred the old, yet awesome design, and that happy fanfare you heared when you finished the level.
I don’t like the fact it installs automaticly the latest version even if you’d like to not update. Last day I were stuck with the first version and wanted to keep it as it is, but it updated automaticly.