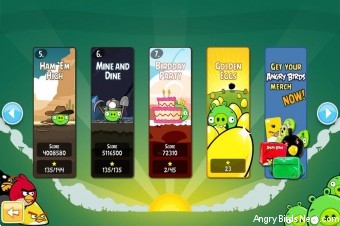 Great news for Mac and PC users, as Rovio has released the latest update of Angry Birds just in time for the holidays! The Birdday Party (as in, Birthday Party) update launched on iOS devices on December 11th, the second birthday of the app, and features 15 new birthday-themed levels and a new Golden Egg.

First, if you were on the fence about getting the PC app, now is the time to do it. Rovio announced in their newsletter that from December 23rd through the 25th, all three Angry Birds apps are on sale for $0.99 USD each at the Angry Birds shop.

Next, the Mac and PC update includes many of the same new features listed in the mobile release, so be sure to check that out for more details.

Notice to Mac users: It seems that many Mac users are missing the datafile which includes the “expanded Orange Bird” imagery. v2.0.1 has landed as a “stability fix” for Mac! This seems to solve the “Orange Bird Inflation” issue, but some users are still reporting super-sensative trackpads.

Notice to Mac and PC users: v2.0.2 has been released. This fixes the Golden Egg 1 bug, the trackpad sensitivity issue, the scores ending in 9 bug, and a few other small things.

Special thanks to Laurence, sal9, and iamMighty for helping me with the details.

I launch one bird just to loose the next bird in line. I don’t even have to touch the trackpad and a bird will launch. Can’t get the three stars if you loose all the birds when you use the power on the yellow bird or try to use the bomb on the white bird. Just installed the update to fix the orange bird and the trackpad is way too sensitive.

I still have that problem, too! I keep checking the AppStore for Updates to fix it, but no such luck. I installed v2.0.1. two days ago, but it only fixed the globe-bird issue.

I have informed Rovio of this continued issue, and I’m sure they will see the AppStore reviews

can any one of u tell me how to backup our angry birds progress for PC?? My angry birds progress is lost when i updated to 2.0.. i know many of the users are facing this problems. So i now realize that i should backup rio and seasons too.. Somewhere in this site earlier, i saw the instructions regarding the backup issue but now i cannot find it…

ok thanks for the reply..

I just noticed, if you pause the game and click the “?” mark, it explains at the end how to use the Mighty Eagle. I’m referring to the Pc version by the way. Could it mean we could be seeing it in the near future?

Can you give us a screenshot of it?

Hey slim, you should add on this post in a new category:

There already up there.

We have the bug list for that, I suppose. Plus we are a bit removed from this post at this point.

Hey Austin, you don’t have to say “hey slim” before your comments anymore.

Can you believe there were 6.5 million downloads on Christmas day?

That is really cool

Now on PC I can’t zoom out in the game and there’s no home button on pause menu.

Use the scroll wheel. And you can go to the level screen then back one

Why? Sorry i forgot

Waiting to hear from some users. Most likely repairs the GE-1 bug, but I’m not positive.

Yes I just checked it as well. Thanks for the help.

the update 2.0 was having only one bug in which GE-1 egg was missing??

Actually, there is one more. Scores ending 9 on the level completion screen is another bug.

For mac users, there seems to still be an issue with the mac trackpad sensitivity.

9th level of which episode?

But upon restarting the level it would fix itself.

There were a few issues with the Birdday Party release, which you can see in the bug list.

Rovio still hasn’t fixed the trackpad-sensitivity bug on the Mac version. What is taking so long??

They are very aware of the issue. Obviously, it’s a more difficult problem than you think it is.

“The waiting is the hardest part.” Tom Petty

I find twiddling my thumbs helps. Or reading a good book. Can I suggest Gouvea: p-adic Numbers? That’s my current one.

Hi,guys!
Recently updated a PC version of Angry Birds from 2.0.0 to 2.0.2.
What is the difference between these two versions?
Thank you.

Slim, what exactly did they fix in Angry Birds Original v2.0.2.1 for PC?

Yes, but you have to go to Angry Birds Download.com in order to get because i couldn’t get right from the game.

Same here maybe from now onwards you can only update the game via the site?
This seems to fix the registration issue maybe?

Probably. Because apparently it’s so minor, when I click the “I” in the game on the Main Menu, it doesn’t even show v2.0.2.1. It just shows v2.0.2 still. It might also fix the brown cake score issue too but doughtful too because it would mean adding .1 into v2.0.2.

This may be a bit of a silly question, but I’m new to PC. How else do you download it if it doesn’t give you the link in the game? Thanks

It asks you to update in-game only.

I quote Austin above – “you have to go to Angry Birds Download.com in order to get because i couldn’t get right from the game”. What I’m asking is what does the procedure involve that Austin used?

Simple. It only involves you to go the site to download AngryBirds, and it updates your game and keeps your progress intact.

Oh, OK, so you just re-download the demo, and it just updates the settings file leaving the highscores intact?

More news about it today at 10 am eastern time.

Thank you,Sal9.
Do you mean official website to learn it?