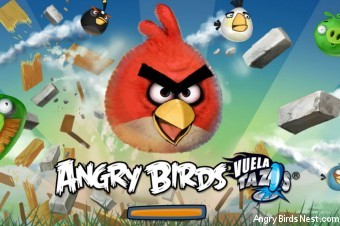 Buenos días, amigos! To cap off an outstanding month of December in the Angry Birds community, we introduce a brand new Flash-based mini-game called Angry Birds Vuela Tazos (“Flying Tazos”). Flash based you say? Yep, this differs from the Volcano and Golden Pistachios browser games, which run on HTML5. To check out the new game, head over to vuelatazos.angrybirds.com.

When you go to the game, you are asked to register an email address or sign in (if you have already done so). This is because there is another competition and promotion involved.  The prizes are only available in Mexico, but you can still play and help us hunt down the secret codes.

Besides running in Flash, there are some other notable items:

So what exactly are “Tazos”? Well, per Wikipedia, “Tazos are round circular disks, which are found in packets of chips made by Frito-Lay and its subsidiaries around the world. The idea behind Tazos started out similar to Pogs, whereby each Tazo contained a score value, and a game was played to ‘win’ Tazos from other players.” Yep, Pogs! Check out the trailer below to see them first hand.

If a level is unlocked, can you play it more than once?

Hey dudes, lovin the music from old graphics with the look of the new… any hope of bringin that to abo?

Don’t believe so, but Rovio is good at surprising us, so I guess there’s hope.

Wish Rovio would stop doing these little contest. It just a marketing for people to buy there products & win nothing.

Voice your opinion to [email protected]. Not here.

it has filled the empty box on chrome

Contest ends on the 30th.

I cannot understand the words, how can I translate it into English or it cannot translate?

FAQ is listed above, the login translations could be found in a previous page comment.

By (who wants to know)

my email doesn’t fit in the email box!!!!

has anyone posted the codes to open the last 3 levels? living in the usa, no way to get them. ;)

Codes are single-use, so we have no codes to give. Sorry.

Where can I get codes from? I’m in the UK and I can’t unlock the last 3 levels

Only in Mexico, sorry.

Vuela Tazos is now at version 1.1.0.1 and therefore the last 3 levels are unlocked for free-play. They are harder than the first 3 for sure…

Well that stinks, I was wanting to give these levels a try. I wonder if there is a cached copy of them anywhere that can be played?

I remember I got some few codes but never used them, >.< Instead I gave all my Angry Birds Vuela-Tazos to my 5 year-old nephew (Which loves Angry Birds)

Even though I live in Mexico I didn’t have the chance to play this game when the promotion was on. So thank you so much for making walkthroughs of all the levels, they all look awesome!