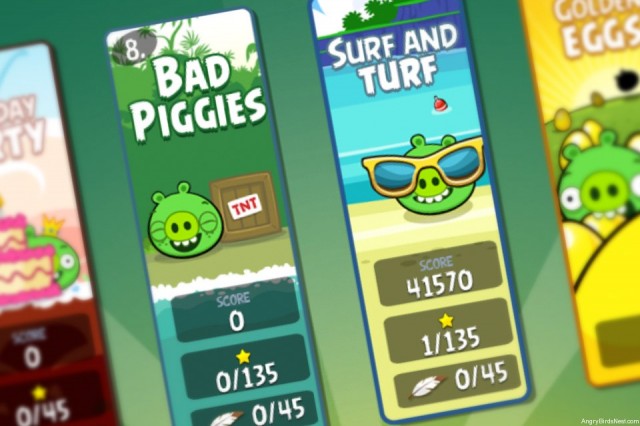 SURPRISE! Angry Birds v2.3.0 is now available for iOS, PC, Mac, and Android via Google Play, and with more platforms coming soon. Now that summer is well behind us (for the northern hemisphere, anyways), the classic “beach” theme of Surf and Turf has been concluded. It doesn’t stop there though, as those sneaky piggies have poked there noses into the original Angry Birds game with a brand new episode (Greedy Pigs! As if having their own app wasn’t good enough!).

Note for PC users: Some people have not been notified by the in-game updater. Instead, go to download.angrybirds.com and click on “Download Free Demo” under “Angry Birds” to get the newest .exe file. If you are worried about your progress, check out our Ultimate Backup Tutorial.

Please do not enter scores on the ABo leaderboard that were obtained using power-ups. One of the key issues is the game does not distinguish between scores obtained using power-ups and those without. Yesterday, we announced a new feature on the leaderboard that allows you to undo your score. This should help those who accidentally entered power-up scores, as they can now be reverted (this could be ones only record of their scores). We are working on additional enhancements and will announce those soon.

Special thanks to all who helped compile this post, including @Brandts and @PlayDBird.

No wonder this update for angry birds came out late… They were waiting for bad piggies to come out. To make it even more special, it’s not a Thursday!

This would be avaible for PC, isnt it?

It will be, yes. Not quite yet though.

Hi @amslimfordy have u downloaded it on whatever u can get your hands on ,or are u waiting for the ipad update ,im hoping it is only a day .also a big ty for seemingly being in ten places at once ,u must be keeping Nescafe afloat …

How do u mean?

Yeah, I have to call out the problems with the graphics as well. The screen looks distorted in places, especially on the birds. It only seems to effect the original Angry Birds game…Space, Seasons, and Rio are all fine, and there was nothing wrong with the graphics when I played it the other day, this didn’t happen til I installed the update. I tweeted this to Rovio, finger crossed they fix it soon!

“…◦King Pig mode is now available for Android/iPhone and looks to be on both mobile and tablets. We believe King Pig mode is unlocked by obtaining 3-stars on all levels through Birdday Party and all the Golden Eggs through Birdday Party. Read more in the original release post…”
As I noticed after 2.2.0 update for iPad and if you don’t mind I’ll said taht again there is no neeed to obtain all golden eggs to unlock King Pig. Now I can confirm that it is unlocked on my phone and I have only 18 GE.

Indeed. Didn’t even notice. Thanks for the tip.

My graphics are really bad now. Does anyone else have this problem?

Yep i have the same problem.

I have tweeted Angry Birds about the graphics problem twice now and they have apologized for the inconvenience and are looking into it…maybe if we flood twitter with it, it might get fixed sooner.

They’re aware of the issue. Now let them be to fix it. If you “flood twitter” you are just going to pull more and more people away from the task. Don’t come off as ungrateful. Accept that they are human and working on fixing it.

Sorry, I wasn’t trying to sound rude, but was actually just trying to say that the more people that let them know they would know how ‘widespread’ the problem is, I just worded it wrong is all…sorry.

Strange the Golden King Pig mode is not in my golden egg collection even though I 3 starred episodes 1 to 7 (Poached Eggs to Birdday Party) and got all golden eggs is there any way to fix this or do I have to 3 star Surf & Turf?

It may include some (but not all) of Surf & Turf.

I hope, than in the future they will mark it as a facebook-originated episode (like f-1 or f1). This way they can easily add Pigini Beach and start second sequence.

Surf and Turf is not part of AB storyline.

Not sure what you mean here. How is the S&T story any different than any other AB level?

Yes, we always believed it was nonsequential (and it has now been confirmed). It just doesn’t follow the basic thread.

Slim, I made a mistake. To try the power-ups, I used one of them in the very first level. And I got a new personal highscore. Now I feel very bad for having used a power-up. I feel like a cheater. How can I get my old highscore back?

You can only revert back to your old score by transferring a very recent back up file.
Any progress in between will also be lost.
I wouldn’t sweat it ;)

You have two options. 1 is to beat that score without power-ups ;) The other would be to contact me by email and I may be able to help you.

Since the first option is impossible (without power-ups I cannot have a 0 bird solution), I decide for option 2. Will contact you this week. Thanks.

I have 3* in everything and all 27 golden eggs, but I still can’t access king pig on Android. He’s not on the golden egg screens to tap.

Did you check the second golden egg page?

i already finished downloading it

king pig is on PC

Autoupdater isn’t picking it up. I manually downloaded it.

I really enjoy the new Surf and Turf storm levels. The lightning adds an extra challenge by distracting you, especially if you play with the sound on. A very nice unexpected surprise. Hopefully we will get a new Halloween Seasons and Red Planet Space update prior to ABSW. Rovio is unbeleivably gracious.

Sad news for me, king pig mode. Just 3 starred all level in abo last week, and this update out, need searching solution for transfer progress from noka to my new unroot andriod tablet.

Any chance of any mighty eagle walkthroughs for this update.
They all appear to be super tough/impossible!?

Please be patient. This update has not yet landed for iPad, so we are quite a bit behind.

Apologies if it sounded like I was being impatient, I was just wondering if they were on the list of things to do.

The King Pig levels are AWESOMEEEE!
Also no power-ups on PC…

You need to note that the Pink Bird isn’t featured in the Bad Piggies episode so far. I find it especially odd that Rovio didn’t take this opportunity to incorporate her into the original game (as well as having to design a pig version of her for the King Pig mode), considering that they did the same with the Orange Bird when they released Birdday Party.

Just because it’s THE FIRST UPDATE of ABo since the Pink Bird was introduced, doesn’t mean they have to immediately force her into the game.

It’s on the second page of GOLDEN EGGS section, @taz… :)

yeah i figured out lol but i dont see king mode on my abo? since i got all 3 stars on birthday party but where to find?

its not there only see golden eggs with stars on it

Then you may not have met the requirements to unlock it.

Same issue. Can you tell if there’s more to do?

its not there at all jsut 27 golden eggs that all

umm yall say that you guys believe its unlock after have all 3 atars on birthday party which i did!! wow stop change the story on your post!!

Excuse me, but you’re being very rude. I’m trying to diagnose your issue via inline text. You’ve provided no screenshots or additional information. What do you expect us to do?

We’ve had far far more reports that 3-starring through Birdday Party unlocks it. Who knows, maybe you need to 3-star the first 15 levels of Surf & Turf as well.

I have confirmed with Rovio. The “King Pig” levels are unlocked by obtaining 3 stars on all levels of Poached Eggs through Birdday Party. Our post is accurate.

Is there anything “special” in the iPad version. Considering it took so long to get out.

No, there was likely a technical issue between Rovio and Apple.

what an incredible update, i love the king pig mode

My game is also a lot lower quality (I have an iPod Touch), and also the graphics on the menus aren’t always the same. On some devices I think the menu graphics look more like the Chrome designs, while on some devices they look like their older designs. Is there a “settings” button or something to where this can be changed?

The “SD” version for iPhone and iPod Touch is universal. There will be no difference in the menus, etc. between your device and any other iPod/iPhone.

All right, but what about the quality…? My iPod Touch has pretty bad quality graphics, while my Dad’s iPhone (on the same version of the game) has better quality.

there’s something wrong with this update, when i zoom out any level, it runs slower than when zoom in,anyone else is with this problem?

I’ve been looking forward to seeing the King Pig in this update! Great new episodes, too!

I have a problem. I don’t have King Pig in my Android Device. I have 3 stars through Birdday Party and all the GE’S with stars. But I don’t have Bad Piggiea and Surf and Turf with 3 stars. Can you help me please?

There is an update on ABSW tumblr, they started new comic, but showed only one panel for this moment – http://angrybirds.tumblr.com/post/33304037886/the-first-in-a-series-of-angry-birds-star-wars

Weird! There aren’t even any words, and you really did mean one panel! I kept clicking things to try to get comic to open.

Any word on availability on Amazon? Apologies if already asked, but I didn’t see it.

Likely soon but we don’t have any fitter information at this time.

I just noticed something: on the title screen, when you touch the options icon, there’s the Power-Up icon. Touching that will give you a notice saying that power-ups, free daily rewards, and the power-up shop are disabled. Touching it again will reenable them. I’m not sure if this option was present in V2.2.0, but it does address the complaints against power-ups. I’m certainly not in that camp, by the way — it’s not like Rovio is forcing us to use power-ups. They’re just there as an aid if there’s any trouble in completing levels.

That feature existed in v2.2.0, though it does not address the prevalent issue of “fair play”.

Thanks for the update alert. Got it here first!!