Rovio Releases Countdown to Angry Birds Star Wars II Which Includes 3 Updates in the Next Week! 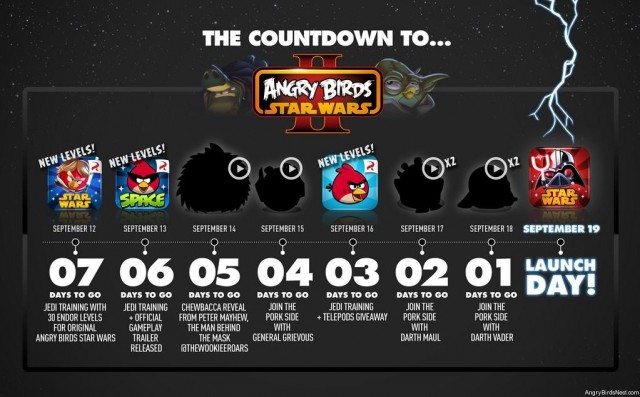 As we start tick, tick, ticking away to September 19th, Rovio has done something completely unprecedented, even by their standards! Rovio has released a timeline countdown of all planned events over the next week! We have known about some of these forthcoming updates for a while, so we’ll link to posts where we can.

Of course, two things need to be said. Foremost, the update release dates above do not necessarily apply to all platforms. And more importantly, keep your eyes peeled to ABN, ‘cuz we will be rolling out content nonstop for the next week!

We’re excited beyond belief… If you are too, let Rovio know how awesome you think they are!

All the Angry Birds games and updates are awesome! You’re even getting me away from Candy Crush!!

i think i saw Droideka robot have legs

@spacer This is one of the MAIN reasons for me joining the pork side.

Not at initial release, last heard from Rovio.