Prepare for the Next Evolution of Angry Birds! Plus Updates on Stella and Angry Birds Transformers

With the recent surprise update of the Classic Angry Birds game with 15 new Flock Favorites levels, Rovio has begun the next evolution of the franchise, according to an announcement on Rovio.com.  They teased that Flock Favorites is one of three updates, with a power meter stating “The Revolution has started!” 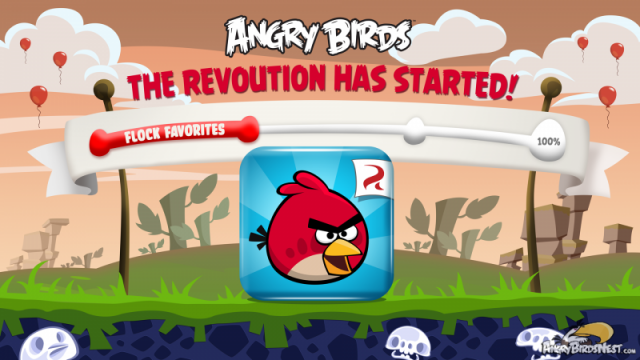 While it would seem like a safe bet to assume that Angry Birds Stella and Angry Birds Transformers will likely be the next two “big things” mentioned, Rovio are masters at the surprise curveball, so it could also imply two new updates to the Classic Angry Birds game. Time will tell. You can read their release here.

Speaking of Angry Birds Stella and Angry Birds Transformers, several new pieces of information have been released, just one week prior to the San Diego Comic Con 2014 reveal of the trailers for both games. 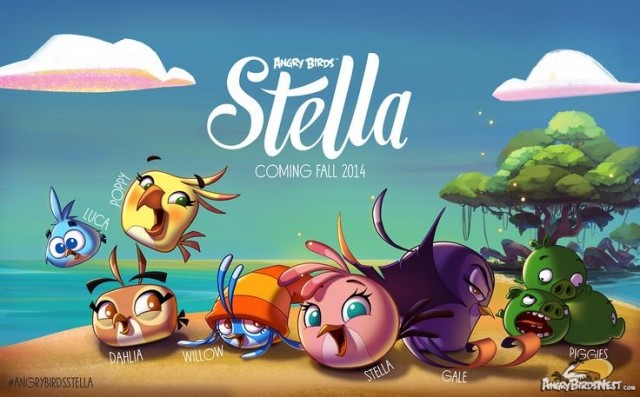 The Angry Birds Rio 2 update, Timber Tumble, included a link to the updated Stella page on angrybirds.com. The page now lets you explore all the line’s characters, personalities and special moves.  Don’t forget to explore the Stella Pinterest page, showcasing some amazing Stella artwork by Rovio.

Toys R Us has also listed three Stella Telepods toys on their site with a September 1, 2014 release date.  It is likely that this will be the date of the game’s release as well. Check them out here:

Another, in a long line of leaks regarding the line, Seibertron.com reports that Toys R Us also posted some Angry Birds Transformers Telepod toys, but promptly pulled the listings.  They mirrored the toy images in their report here.

Additionally, Forbes.com, GameInformer.com and FamilyGamer TV bring new images of the same products and more, including prices, a video showcasing each toy, and new Rovio artwork for the line.  From their reports — and in the video above — we learn that the Telepods DO transform, it appears that most will be available as Toys R Us exclusives, and the toy release date is October 1, 2014, again, the likely release date of the game.

As usual, we’ll bring you more updates as they become available.

Click the linked text to read our previous reports about Stella and Transformers.

These updates bring with them more questions than answers.  What do you think?  Are you excited about the future of Angry Birds?  How do you feel about the seeming gender split with Stella and Transformers? Will you play them both?  Are you excited for the new Telepods?   How do you feel about their price?  Do you think we will see two new updates to Classic Angry Birds by year’s end? Are you on-board with the Angry Birds Evolution/Revolution? Sound off below!

@dr-omega the next 2 big things are updates for ABO, that is what they mean in the blogs. With the 5th birthday of AB, its still not done. Part 1 out of 3 updates. But of course the 2 new games are also big things :)

I do not think so, I think it would be bad for rovio…

Maybe they discontinue the Classic game and bring out a new one with Angry Birds 2 or something.. Maybe update the sprites to the Toon versions like with Rio.

It would at least be a way for them to add new challenges with the Apple Game Center.

THIS app will discontinued something, otherwise its to big :P
But why not make angry birds 2? same level style, new game :)

Maybe they want to change birds graphics like in Angry Birds: Rio 2?

I think they will make a new episode partation just like AB Rio, with Toons look in it.

Great post and very information video on what is coming in AB Transformers.

My guess is that the revolution will include the Stella release.

My other uneducated guess is that there will be more of game playing with the transformers and it may be coupled with a race. Run the race first and when successfully completed or won the race telepod transforms into a sling type transformer to battle the enemy/pig.

Rank: Out of this World with 2995 points
By Arth (@arthromod)

What more could I ask for? My favorite bird being Hal as my favorite transformer being Grimlock! This is too good.

hum this is the most active years for the birds yet!

Did you guys notice that the word “Revolution” is mispelled as “Revoution” in the first image? Also, in that picture, there’s also a bird skeleton! Wonder where it came from (probably Darth Vader).

Rank: Out of this World with 2625 points
By Ahmad (@ahmadathar)

yes,i did not notice it before @dzung.

Transformers are not my cup of tea, so I don’t care much about that part of Angry Birds. On the other hand I can’t wait Stella to be release. Of course, I want all toys as well. As I already have all ABSW 2 and ABGO telepods Now I wonder if Stella telepods will make game more interesting then playing without them and any of game IAPs. As I can see Stella and her friends have different outfits in different sets and I wonder why.

Wondering if (or how) the Transformers telepods work when in Robot form.

Rank: Deputized with 235 points
By Foxy The Pirate Fox (@angrygamerbird)

Personally, I would like to see an updated/revised Angry Birds, and as someone stated call it Angry Birds 2. Keep it the same “If it ain’t broke, don’t fix it”!! I think some of these Transformers, may be aimed to the younger kids??

‘Angry Birds Transformers is coming out this fall! ‘
stated by rovio

When I hear this, I can’t help but think of “Viva la Revolution”.

Also, could there be a Flock Favourites for the other games as well?

If the other updates are for Classic, I have the following predictions:

• Telepods will be supported for the original Angry Birds game.

Stella and friends should be interesting. I am looking forward to seeing what this AB version entails!!

Personally, I hate all the variations such as Epic, Star Wars etc. I just prefer more of the Classic Angry Birds.

Rank: Deputized with 235 points
By Foxy The Pirate Fox (@angrygamerbird)

Hope they add other telepods like Jazz,Brawl,Thundercracker,Grey Slam Grimlock and Dark Megatron