Is Angry Birds Seasons Poised to Get a Fourth-Annual Advent Calendar Update? 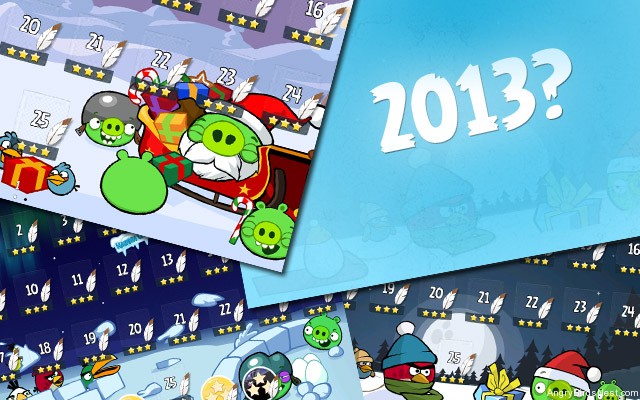 One of our renowned sleuthers @Josm has been closely watching Rovio’s Twitter feed for hints about forthcoming updates. A lot of users have been asking about a possible update to Angry Birds Seasons, since the last episode we saw landed back in May. Well, there were a few tweets to choose from, but we’ll include this guy:

@Tallncurvy Well, at least Seasons might be getting something.. ;)

Now we have to be perfectly clear here: This is not a guarantee! It’s entirely possible that we’re reading a bit too much into it, or maybe Rovio has a completely different plan for Seasons. But both BirdLeader and I are optimists and Seasons enthusiasts, so we’re hoping this means…

Another Advent Calendar is coming to Seasons!

Oh, and let’s not forget about the original Angry Birds update coming soon! There may be some surprises in store there too.

Oh, it would be great to see a Seasons update! :D There wasn’t a Halloween update this year so maybe there will be something awsome coming for x-mas :D

@lisko I hope there is too. I felt so let down that there wasn’t a seasons Halloween update. I tried the tournament thing for a couple of days, but it wasn’t much fun. I guess I just don’t like disappearing games.

A basketball themed image was found in the Seasons data files, so I doubt that we will get an Advent Calendar update. But,we might get a basketball/christmas theme?

Those files have existed for a while, so I think they were part of some promotion that never got implemented. I’m still banking on Christmas :)

Or possibly like the Intel levels in Winter Wonderham?

Maybe they are planning more updates for different games as countdown to Angry Birds Go! but the seasonal themed episodes are still my favorite! Lets hope so

I don’t think this will be a Christmas themed episode because there is already one in “Season 3”. I think that is why they skipped Halloween too. It might still be an advent style episode (like Summer Pignic) but it will be something different like New Years or Hanukkah or something.

I thing you are little bet wrong : seasons 3 is from last year 2012.
Seasons 2 . Is from 2011 .
Seasons 1. Is from 2010. But …!
I an Agee with you: this year is an other kind of advent…!!! Could be seasons 4 on one day update ; but maybe not 25 levels .
I don’t thing ROVIO will release a 25 days advent for seasons . Because the are working on Angry Birds GO! Don’t you thing so ! It’s to much play Games at once .!!! So for sure there is coming up the update on ABO. And that is my believe part of our Christmas!!! WHAIT !!! I believe like you there are something ” Extra ” or before Christmas or after !!!
Could be like when they launched ABSWII . They give us before that ; 3 updates .!!! Do you remember that . That are my wishes.. !!! Why
Because ROVIO is making big money whit the Telepods .
So !!! They will close this year with SOMETHING BIG.
I do big kudos . Do you.

@SnTrooper That’s what I am thinking.

They haven’t done Boxing Day yet.

True, or Thanksgiving. But they usually do international holidays, not specifically American or Canadian. Unless it’s chinese…

Thanksgiving, with a new turkey bird, activate and it sprays its tail feathers.

Hmm…. While that may sound interesting, I’m still highly skeptical of it. Still, it would be nice if they could update Seasons Free.

@trainman2012 Rovio has stated that Seasons Free (for iOS) is meant solely to be a trial. It sounds to me like they have absolutely no plans to update the app.

Seasons is the best app for me along with Space..
Looking forward for a Xmas update

I’m not sure it’s going to be an Advent though. Because there’s no point of ABFriends in that case which will get daily/weekly new levels..

Maybe, maybe not. Rovio always have a plan, but I hope it’s a little bit surprising :)

I don’t care what type of theme Seasons is going to come out, but I’m happy as long as there are new levels!

Even willing to PAY for a Christmas update-maybe Rovio could donate some/all of the proceeds to the Philippine Hurricane disaster fund-or a charity of their choice. Just a thought.

I hope this is true.

I couldn’t care less that Seasons didn’t get a Halloween update, but Christmas just feels like a tradition.

Isn’t AB Go coming out in December also? It looks like it will be an Angry Birds month!

Facebook comment today: “we haven’t announced anything yet, but have something really cool planned for the Holiday Season More info coming soon! “

and:”We’ll keep you posted! Something cool might be on it’s way sooner than you think “

Sunday is the first of December, so I hope it’s an advent calender, and it’s in Seasons!

I know Rovio has to keep making new games to make money, but the only ones I really like are the AB games. I’m not interested in AB Go, and don’t really like Friends because it disappears, so I’m always disappointed when an update is for another game.

There’s a new update coming tomorrow and it’s not about Red!

Tuesday update… Could mean an Seasons update on thursday? :)

I can’t wait! I think the Seasons update won’t be until Sunday. They released an Easter update on Sunday a few years ago, so Sunday isn’t impossible.

It’s a fair guess.
The previous three winter updates were all released on December 1st, 25 days before christmas.

I am not surprised by Rovio’s plan to update Seasons, in fact I would expect the community to protest if they DIDN’T update Seasons. These few weeks have been rather dry in AB content-based updates, and I do hope that when updates DO come, they come in floods, it has happened before in the epic countdown to ABSWII, and I do expect a similar thing to happen when Rovio is counting down to ABGO. The release of ABGO is a historical milestone in the history of Angry Birds as it seems to feature 3D animation for the first time! I sincerely congratulate Rovio for the achievement.

Back to the topic about Seasons, it is my favorite AB game, like many others, and I am a bit annoyed by the apparent lack of updates. I’ll say this first: I prefer CONSTANT regular updates that add new content rather then a FLOOD of updates and none following for the next HALF of the year. (Referring to Abra-Ca-Bacon). Abra-Ca-bacon is a great update, however there are no more updates to seasons. Great to hear that an upcoming update is coming to Seasons, and I do hope that it is of highest quality and hopefully something interesting and refreshing that they could bring into the game with the upcoming Christmas. I am most certain that it would be an advert-calander styled update to the game, as it has been a tradition already to the game, but would limit the amount of the levels Rovio could release. I would not dare to hope for TWO episodes in a single update, or two separate updates, but Thanksgiving IS around the corner, no? ;) Also I extremely look forward to the soundtrack of the episode(s), in hope that it would be as great as always.

In conclusion, I really look forward to whatever Rovio is planning, as their updates have never really disappointed me (the TIMING of the updates is a different thing though…) and I hope that Rovio would end this great, milestone-studded year with a BLAST!!!

pic.twitter.com/3Flw8xCIiZ : Seasons may get an update this time. seriously.

On Facebook someone. Said under the shook wave cover page update they should update seasons, and they said “we’ll you may like what we have planned this week”. Season this week?

Question: were the 3 christmas editions and the summer pignic episode the only calender style levels so far or have there been other calender style episodes in the ‘history’ of Angry Birds? (apart from AB Friends of course)

Yes, those are the only ones to date.

@Bassam77 — Love the video! Wonder if the rest of us have to wait till Sun? Wonder if it will be Sun in Finland?

You can unlock level by 99 sen.