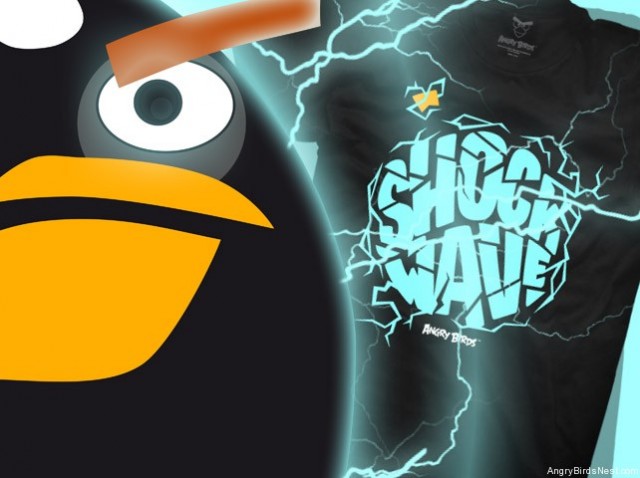 Rovio is at it again! With Thanksgiving just around the corner (at least here in the US), Rovio is teasing a brand new update for Angry Birds original!

Not only will this update bring a whopping 30 new levels, it looks like Bomb the Black Bird will be getting an overhaul. According to the Angry Birds Shop:

That’s all the information that Rovio is releasing for now, but we never stop at the facts, do we? Of course not, we love to speculate!

Cool news! I hope that every ABO Character will get his own episode and power, like reds mighty feathers, and now maybe bomb bird!

I know, right? I imagine Chuck’s new power would speeding 3x than before and freezing things on contact.

No details on what it is? In ABSp, didn’t they call his explosion a shockwave? Maybe he will just be stronger.

Nice. I wonder if Red will keep the homing ability and/or more bonus egg defender levels.

I’m hoping his power will be retroactive in previous levels because I just got a new iPhone 5s and I have to re-3-star everything :/

I think it will be similar to R2-D2 in ABSW.
But why wouldn’t this be Danger Above 2…?

It could be Danger Above II with bomb saving the day with his awesome electrifying shock wave ability. Or not. And I think the power will be similar to a shock wave with electrical after effects… maybe. But I’m ready to be surprised.

That is awesome! It will be great if we get an update for each bird like this. I couldn’t imagine what Orange Bird’s power would be…

Just looked deeper into the Shop. On the homepage it says “Send a shock wave” and has radio pulses coming out of the shirt. I’m guessing this will be a more powerful explosion with radio waves/electricity instead of the classic explosion.

Bomb Birds new power looks interesting with the introduction of electricity or vibration type of shock wave. Wonder if the destruction effect will be greater than its present explosion powers. Maybe Thanksgiving will be the release date if they are still going to do the 25 days of Christmas. So if the GO-auto racing games are released, three new types of games to play for the holiday season.

I think if this comes to Seasons then we won’t see a Xmas episode this year… Unless they’ll combine Thanksgiving and Xmas together, starting Nov 28th (a Thursday) and going on for like a month… that would be really cool..

@joeyba This will be an update to ABo, not Seasons.

I’ve said this so many times before and I hope that this is finally it. I’ve always wanted to see the electricity conduct through metal in the level.

It conducts through everything in the same way it seems.
It’s funny to see the pigs eyes light up when the shock wave hits them.

Hmm…. Interesting. Can’t wait to see how this turns out.

That’s what I was thinking, Darth Bombbird!

I have a feeling that Bomb will look different while the original one will still be there too.

I was thinking like Darth Vader, but with more ‘shock waves’.

Bomb’s explosion power in a few of the animations has had some sort of electric effect.

Maybe these powers are to do with Go!, where the birds get new powers which are similar (or the same as) the powers they get in Go!. Reds mighty feathers’ power is used in the Go gameplay trailer, so maybe Bombs New power is used in Go too.

When this update will come to symbian devices? ( nokia symbian belle)

Sorry Luiz, we do not know when updates will land for specific devices.