As referred to in parody fashion in our earlier Pigineering article, we are big fans of space exploration because of Fat Pig’s wonderful tales of eggsteroid mining and intergalactic cake shops the size of a solar system. Don’t forget to bring the manual for the Infinite Improbability Drive! You never know what to expect each day at Pigineering!

Today is no exception, some mad scientist among us was keenly observing the recent SpaceX activities here on Earth while scrounging and saving for his Tesla Model S. Soon after, this set of wacky blueprints appeared in our office. It claimed to be a re-usable rocket first stage that, if successful, will drastically reduce the Bad Piggies‘ cost of access into space. 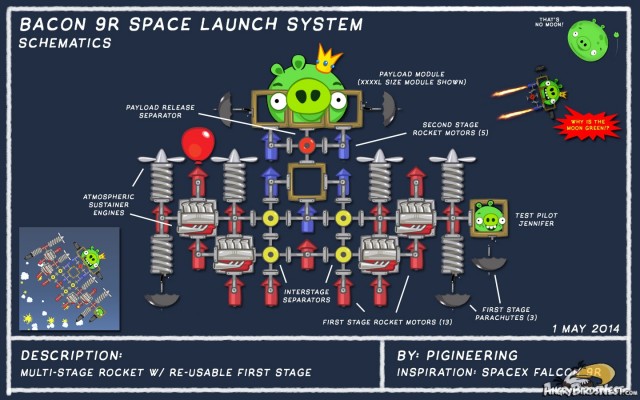 Schematics for the Falcon 9R Rocket in Bad Piggies

As we know, the first stage of a rocket is responsible for putting a huge mass of stuff into orbit, and it has to deal with the lion’s share of the seriously huge job of defying gravity and making sure your upper stages and payload(s) are in the right trajectory for orbital insertion. It is typically the biggest part of a rocket for that reason. You’ve built rockets in Kerbal Space Program before, right?

The SpaceX Falcon 9R would be Earth’s first ever re-usable first stage and it has a novel ability to conduct a powered descent and soft landing back to Earth once its upper stage is on its way. You’ve seen those jaw-droppingly awesome powered descent scenes in sci-fi shows; now imagine the same capability existing today, with a giant rocket to boot! No wonder our scientist was thrilled to work for nights and days on this “Bacon 9R rocket”. As you can see in the below video, it’s just like the Falcon 9R, only pigger! **

Except of course, we used parachutes instead of rocket engines for the landing. This still provides the required soft-landing capability, without the need for heavy landing gear and sacrificing payload. Did I mention the Bad Piggies like simplicity? We don’t have the means to design pens that work in space, so we use pencils!

** Means more primitive, poorly pig-built by the lowest bidder, 100% chance of epic fail (or epig, if you prefer). At Pigineering, we never fail to fail!

Silly Pigs ~ Of course we like Bacon! Thanks PIGineering ~ Please make more!