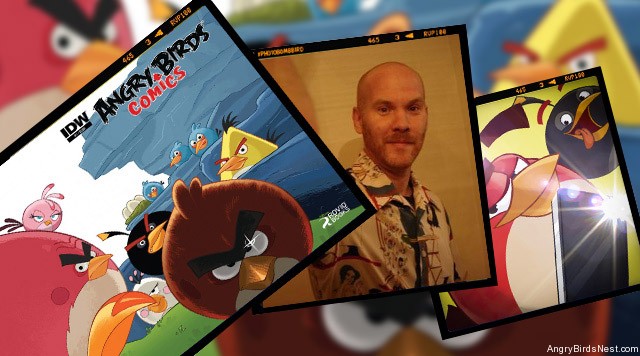 Last January, IDW Publishing announced that they would be adding an Angry Birds comic book to their diverse line of comics, which includes Transformers, My Little Pony and Ghostbusters. Eisner Award-winning writer Paul Tobin (@PaulTobin on Twitter) is one of the writers working on the upcoming comic.

Paul graciously took time from his extremely busy schedule to grant Nest News an exclusive 20 question interview. In fact, he was working on a “speed” request for 81 more pages of material for the comic when we contacted him with the interview request.

You can see more of Paul’s amazing collection of work and musings at his site: paultobin.net and / or follow him on Twitter.

A big thanks to @dr-omega for the amazing interview.

It will be interesting to hear the birds’s voices and who would give their voice to each bird :)

Being a comic artist myself, having written a series and with a comic app coming out in April, I’m really excited for this series. I’m wondering if any Angry Birds episodes will be based upon these comics, especially the Space comics.

Too bad he couldn’t give us a date, as well as countries it’s being released in. (I do hope it’ll be released in Canada.)

The original press release (linked above) gives the date as June.
http://www.idwpublishing.com/news/article/2734/

I HAERD ABOUT THIS, MAN! I’m excited for this.

When the first story is released, there’s no WAY I’m gonna miss that opportunity to buy the comic!

I hope it Will be released in Indonesia,and maybe,in bahasa

Now that’s a surprise!! I’ve seen lot’s of different types of merchandise, you name it, I’ve seen it, but never would have thought of a comic book!! I guess when something is popular, ride the wave!!

How the heck did I not hear about this?!

OMG too epig. Now Rovio’s twitter has posted this!

Wow, so many new things coming!

Rovio, I can’t possibly play all the new games or finish reading this comic all at once!?

Yes, I agree with you @theangrybird :P

I wonder if there will be an Angry Birds Stella crossover, with the classic birds visiting Golden Island, or Stella’s new friends popping up at Piggy Island.

Good to know that angry birds will now have voices. AB-Go! things(kart races) in some episodes would make it better.

I agree with Mr. Tobin here. The pigs have TNT to blow up and houses to set on fire, while the birds just have a nest and eggs and..Chuck.

This is gonna be an awesome comic book! I read them in my free time, so this will be perfect. :D

Interesting article. Liked the questions because they asked for information in areas that were not realized.

I am going to assume these will be electronic comic books since the characters will be able to talk. Wonder if there will be paper comic books also along the same writing venues/themes that Mr. Tobin will be presenting.

David Baldeon is a great artist for this title.

Only now I noticed, that Jeff Parker is in the writer spot. Is it some kind of an error, or it it a collaboration between Jeff and Paul?

Amazing, is there any more of these leaked images? I thought it would be understandable for kids- but they put so many other references to other media. Like family guy, but of course, appropriate.

I hope they continue the Space Comic they made way back on 2012- They just left that blank, there. They only made the part where Ice Bird crashes down, it just ends there!