You’d think with the ridiculously unstable, top heavy structures featured in every single level of Angry Birds, the pigs have nothing in the way of architectural talent, right?

With International Bacon Day just round the corner, we need to set the record straight on this one, for the full might of the Bad Piggies’ engineering talent are being put to the test this Weekend Challenge!

We were proven quite wrong in Angry Birds Toons last year when the King Pig summoned his personal army of Bacon Construction Vehicles to construct the world’s piggest sandcastle of all time.

Only serious, highly developed civilizations would invest so much pigs and materiel into the construction of enormous porcine engineering vehicles and we are pleased to note the Bad Piggies do not disappoint with their aspirations to be Master Builders, which is why we have consistently reused the above image again and again to prove an often overlooked point that pigs are not as fat and lazy as they seem. Well, actually, piggies are indeed fat and lazy, but like all great peoples, the Bad Piggies have from time to time bravely rose up to answer the call of breakfast and just a few days ago, fought valiantly over a last slice of cake in the manner resembling the beautifully civilized Pigtorian Age… except with sharp tails, not pistols.

But enough of reminiscing about our gentle-pig-ly past and on to the subject of the Weekend Challenge. King Pig’s mission, should you choose to accept it, definitely requires a hard hat and and boring lectures on safety regulations, because OMG! Bacon Construction Vehicles! Need I say more? 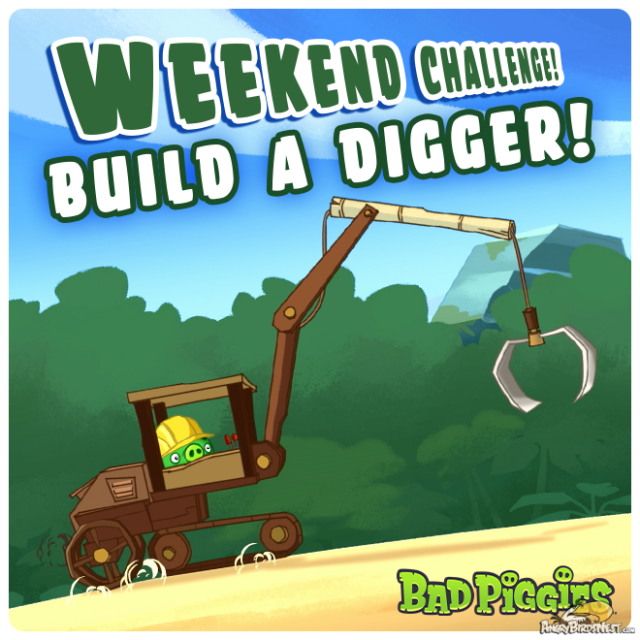 “What is Pigger than a Digger” – Rovio 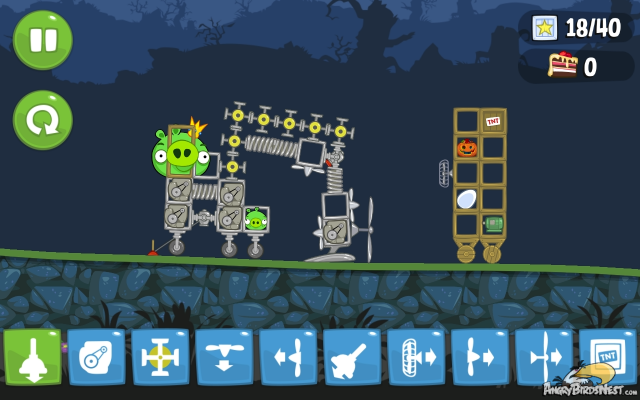 “Driver! Demolish that slum and retrieve the egg!” “Boss, there’s a pumpkin still living in the apartment!”

For our Weekend Challenge entry, the conventional excavator design was utilized to good effect to produce a passably realistic shape, albeit with wheels for simplicity and speed in lieu of proper caterpillar tracks. Additionally, with no small amount of Bacon-Dynamic engineering talent, the hydraulic arms of the digger are definitely functional, although I was not able to obtain enough striking velocity on the ground to actually “dig” the entire bucket to penetrate the ground (by virtue of inadvertently breaking the game engine’s physics). You’re certainly welcome to try and post the result in our Facepork page!

For the excavator’s primary tool, the bucket, a metal wing object was utilized as it sticks out at just the correct perpendicular angle from the base of the arm to function as such. Diggers are also regularly seen in construction sites and roadworks equipped with powerful hydraulic jackhammers – this is simulated in our Bad Piggies Excavator by the ROFLcopter rotor which in addition to supplying torque to move the primary arm, also serves as a claw to move and break objects with. To counter the massive torque of such a large hydraulic arm, King Pig was told to sit on the engine deck to prevent the whole vehicle from toppling, while a massive shock absorber assembly was mounted on the movable arm right where you’d expect the mighty hydraulic pistons to be on a real digger.

The piece de resistance of our design is not just in simulating the digger’s equipment, but also the range of motion you’d expect from watching decades of bright yellow JCBs toil around your neighborhood. After all, the Pigineering Department prides itself on its ability to deliver not just look-alikes of real world machinery, but a defining feature of what I post on YouTube is that said machinery should be able to function in a manner identical to its real life counterpart as well. With the exception of flying aircraft carriers, of course – they don’t exist (yet).

Watch the video below to view a simulated demolition scenario, where a block of slum apartments is demolished to make way for a new highway across the Field of Dreams. 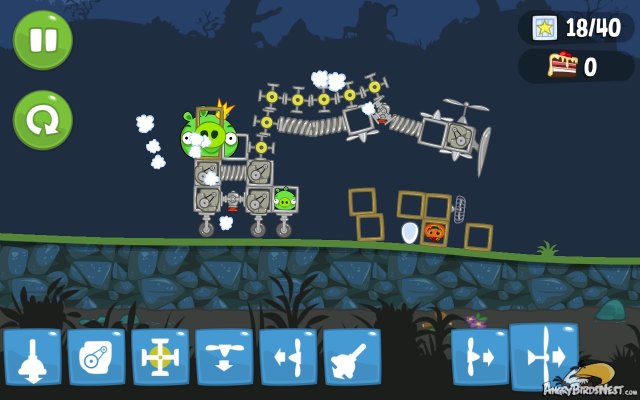 Check out that awesome articulation!

Construction sites and all their massive machinery are so full of awesome. However it is a pity that people don’t give builders the respect they deserve where the author presently resides, and such jobs are typically outsourced to low-wage labor from developing nations.

Well, that’s why the author chose to study pork-hanical engineering! :)

Visit www.pigineering.com for more egg-xamples of random pig engineering and epig failure with every click. Remember, we “Never Fail to Fail!”

@Les-Toreadors This is mine, No Power-Ups!
http://youtu.be/xK5h_EhRh6g
I made a Digger that takes the King Pig and moves him to another place and drops him there. so This digger is very useful to move the big, fat and lazy piggies to their ideal place! Thanks ;)

@mpg973 wow! that one is the best digger i have seen in this challenge! nice

Hahahahahaha! This is the best King Pig picker-upper created ever! You’d think the fat bacon will drop out at such insane speeds… but he doesn’t!

@mpg973 this is hilarious!
Small pigggy seems happy to be lifting King Pig in his big machine. Best creation so far in my opinion :)

Wow, thanks @Josm @Les-Toreadors and @Joeyba I think this one was my best machine ever.

Outstanding as always! Thank you Pigineering for never failing to amuse!