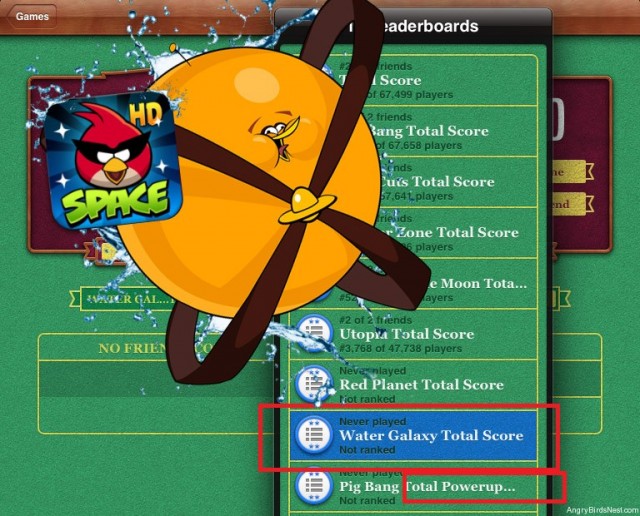 We are proud to be the first to announce the next update to Angry Birds Space — called Pig Dipper — is coming soon. The details are very sparse, but there are definitely some things worth reporting, so without further ado.

Note: On December 7th, we received word that the episode name, as appears in Game Center, has been changed. The original name was “Water Galaxy”, a strong contributor to our speculations below. All references below reflect the updated name. This reminds us that we should never omit our favorite disclaimer: “These names are subject to change.”

We are definitely excited! Are you? (disclaimer, don’t just say, “Yes”)

While you are welcome to share your opinions about this update below, we kindly ask that those displeased with Power Ups express their opinions in a suitable forum thread. This is not the place to vent about said issue. That said, Rovio took our previous feedback very seriously, which is one of the reasons we believe we’ll see separate scores. Fingers crossed.

Lastly, another special thanks to @Nobelak555 for his ongoing assistance and sleuthing abilities.

New Image: On 8 January, Rovio released a teaser image on Facebook (caption: “Coming soon. (Quack!)”) and Twitter (caption: “Bathtime! #comingsoon”). Here, we include the image from Twitter as it shows a little bit more. We hope this means that Pig Dipper will launch within a matter of days! 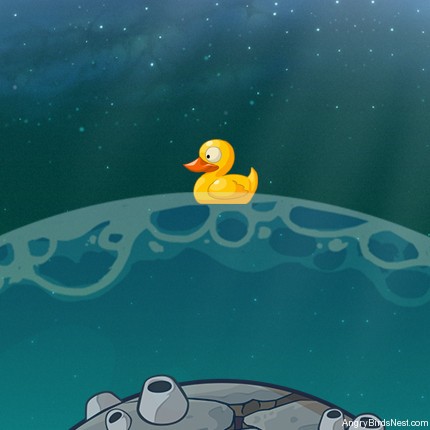 On January 9th, Rovio released a trailer for Pig Dipper (yes, the name is now confirmed!) The caption says the update will be available “*very* soon” and the video says “Now available”. So perhaps we could see the update land within a matter of hours! The water physics look similar to the Piglantis episode of Seasons; the video says 30 levels will be included; and the Power Ups look completely new!

@PK — I immediately thought the same. Interesting that Where’s My Water is made by Disney, and Disney now owns Lucas Films. Wonder if there is a real tie-in?
@AMSlimfordy — So do we expect this tomorrow?

We don’t have any insider info.

@pokemonguy93 and @mvnla2 aren’t duckies presented in ABO on some early episodes in 2010? Where’s my water is from 2011 and duckie isn’t same as in Disney’s game.

Yes. But the design of the ducks looks similar.

Rubber ducks are in the original AB.

@angrybirdsfanguy438 I can remember rubber duckies on some levels in ABO, they were part of piggies “inventory” Anyway, although kind of sentimental and romantic they are too way childish. But still piggies are kind of reterds.

too childish?…. for a game that can be played by a four year old and features plump birds cannonballing into pools ?

maybe the episode with tax forms and bottles of beer are coming in the future, but i am satisfied with the ducks for the moment. (i’ll pass on commenting on the romantic aspect)…

anyhow, best of luck in the episode. PEACE !!!!

Oh come on @tmax don’t be too harsh to me. I didn’t mean any bad. As woman and mother I am for games content that is suitable for everybody be it 5 year old kid, teen, young adult or adult. I am very much against brutal violence, bad language, crude humor or alcohol drinking.
PEACE with you too. Enjoy game, it’s bath time for piggies, let them play with their duckies.

well now i feel a little bad…. but i didn’t mean to come across as harsh — forgive me….hope you are enjoying the update, i played the first 2 boards , pretty neat…. take care

Pig Dipper will also introduce never-before-seen power-ups (be sure to check out the Pig Puffer!) along with extra power-up specific leaderboards.

Excited? Then yell “I GOT MA RUBBER DUCKY!!!!” repeatedly in the mirror while you wait – The new update will be available in app stores soon!

In the video it says “NOW AVAILABLE!”

I think it is coming tomorrow, this time for an AB update is not standard

It seems that black background isn’t exclusive in ABSW.

Looks awesome! Though I will say the physics looks confusing… maybe I can get college credit! It doesn’t show you if power-ups work differently, but the new ones looks sort of cool… maybe they’re only in Pig Dipper? The inflating one doesn’t look like it would make sense anywhere else…

I think it would work in other places, probably anywhere with pigs in bubbles.

I find it awkward that in the video Rovio said that ABSp is the #1 app of 2012 when it’s actually Pages by 53.

There’s a big difference between current rating and year-long rating.

especially when current would be in a different year then 2012 :)

I think and hope for a Update today. It’s Thursday :-)

So how does the first showcased power-up work for Blue Jay, Blue Jake, and Blue Jim?