Angry Birds Space Fry Me to the Moon Update Out Now!

I love waking up in the morning to see the community abuzz with news of a brand new release. Today is one of those days, as the Angry Birds Space Fry Me to the Moon (v1.1.0) update has landed on iOS and Android via Google Play and Amazon AppStore, with other platforms coming soon.

Update for PC: “Fry Me to the Moon” is now available in the Angry Birds Shop! If you are having difficulties with the in-app updater, you can manually update your app by going to download.angrybirds.com and clicking “Download Free Demo”.

Warning for Mac: Now available in the Mac App Store, but do not update!!! According to @sal9, the update both erased his previous progress AND won’t save new progress! Rovio was made aware of this issue, and encourage you to backup your progress and do not update until Update v1.1.1 is now available and all appears to be well again.

Update for Playbook: Now available in the App World.

This update includes new levels and a bunch of bug fixes, which we’ll delve into below:

Some Helpful Links and Goodies 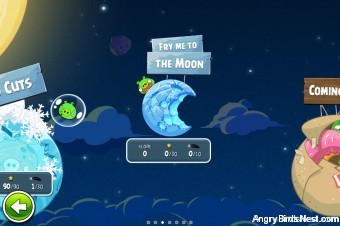 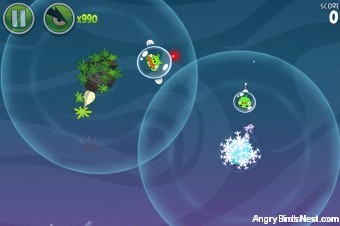 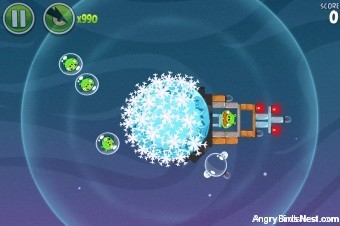 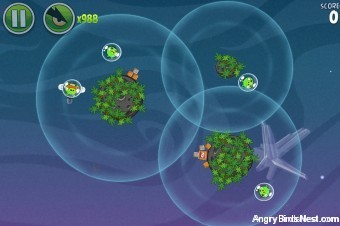 Ya know,what I saw on v.1.0.0 already hat the moustache pic in that exact spot.

When will the upgrade be available for kindle fire?

Already is, via Amazon Appstore.

how do i get it i already purchased the app when it first came out, the 2.99 version (hd) so do i have to purchase again, i dont see an option for upgrade

If you go the Amazon AppStore, there should be an option to update apps (free)

Probably part of the “Free for Samsung Galaxy devices for 3 months” idea.

That was part of the original release.

Anyone got the Menu Popper achievement?

No. Is it still bugged?

Finally the update is out! And no DZ or ME for Android. :(

Just glad that we can get a free Space Eagle each day :)

Me too, glad Rovio is hearing us out :)

Yeah! How come in the pics Danger zone is not after or before fry me to the moon?

Danger Zone was moved to “after Eggsteroids”, probably since it is not available on all platforms.

I wish this update will land on PC.

HAHA. Not a big fan of slim?

gosh, i’m trying to get past these levels, but the low framerate f my device is nervewrecking!

Anybody know “what if you purchased it on Amazon”? It only updated in the Google Play store & that would mean that I’d have to purchase it twice AND possibly/probably not have my work from the other 2 planets transfer over.

Patience. It will arrive on Amazon soon.

Thanks, Slim. I was just nervous that it wouldn’t go to Amazon.

@concretebrunette I guess that Amazon users get to wait since we got the Rio updates a bit early. It is hard to wait, isn’t it? I keep refreshing my apps, and everything else needs to update, but not Space so far :(. I still need about 35k for Danger Addict, so at least I have something to do while I wait. Hang in there!

All right, this is what i’ve got:

Thanks! I’m working on posts now; leaderboard next.

Also, the new eggsteroid is labelled 6 so I guess the galaxy note is not considered 6 anymore.

that one is now labelled E-S

we were doing some more on this: https://www.angrybirdsnest.com/forum/discussion/1009/angry-birds-unconfirmed-three-star-minimums

Hi….!!! Never mind I Got it 3 stars on all 10 new levels …!!! … but !!! Even that the green notice on the bottom right come in up and said this ” 3 stars Achivement Gained ” . I went to check on GC. To Achievements does not listened!!! It is normal or I am missing that ; even on the Leaderboards on GC is not listened too.!!! So I am missing that… !!! Dear Slim if you see this posting or anybody that knows this happenstance ; let me know ,,, okay. Thank you.. At first I am very happy . 3 starred en finished.

Perhaps it grabbed an old achievement. There were no new ones in this update.

It seems to be a nice mini-episode! I´m looking forward to the pc release of it.
I really wonder what they do with the “Coming Soon” planet. I personally dream of a leveleditor so that you can share levels with other players.

Yay! Just updated on Google Play, ready to tackle the new levels. No new achievements provably because they fixed 1 or 2 of them.

Just curious, which platform(s) do you play AB on?
I thought you switched from pc to ipad.

The Feather Meter is really a nice improvement.

Another “extra”: on the level selection menus, a feather will be attached to the levels on which you used space eagle and the size of the feather is proportional to the percentage of destruction achieved ( 100% full size; 95% slightly smally ans so forth )

Hrm… I’m not convinced this is a good plan. Seems confusing, if you consider 99 vs 100.

It is already confusing a few, me included.
It’s work in progress, Rovio got some heat with SE pricing.
At least they try to improve things where they can, we can give them that.

ps: this new feature is part of this update btw.

Small correction: It seems that there are only two sizes. Full size feather for completion and one smaller size for incompletes.

Hrm… Again, not sure how much confusion this is going to cause, but interesting concept.

I cannot confirm this. I have used some Space Eagles in different levels where I have not earned the feather yet. But on the level select screen there is no smaller feather.

Really? There is for me (not that I have that many feathers or attempts) but those where I haven’t yet got 100% I have a smaller feather. I’m not convinced they’re proportional though, I think it might be size bands, perhaps 0-48, 50-99, 100 or something.

This “extra” did confuse me when viewed the initial time.
It gave the impression that a full feather was earned.
Had to go back into the level to verify if it was 100% or less.
The size factor was not pronounced but noticeable upon further review.

Does anybody know the sense of those small feathers?

Yes I mean the reason. The small feather does not help at all. For me it’s completely useless.

Where is new golden eggsteroid?

3-10, right below the slingshot. Fling and redirect Laser Bird.

I am working on updating the Eggsteroid guide now.

About the only new Eggsteroid in this update, it’s based on Pong! I wonder why they used 04-01 on that Eggsteroid?

i already beat it, i wish there were more levels for “fry me to the moon”

This was definately a nice surprise to wake up to. Hey @amslimfordy. Is there any word yet about what exactly happens to the free DZ for Samsung users?

I know you’re busy right now. So feel free to postpone your response.

Tip: Sometimes two pigs will have an antenna cap. If one of the pigs is moving around, when you pop the matching pig it will fall out of the sky.

The content of this update caught me off guard, and I can’t say I’m very happy with it. If I want to try to hit moving targets, I’ll play some game other than Angry Birds. Hopefully this particular aspect doesn’t become a staple of future updates; I’m tolerant of the occasional level with moving pigs, but whole episodes of it are not enjoyable to me.

That’s what I also thought at the beginning, but after trying to 3-star every level I realized that the “moving targets” just add more puzzle complexity. In the majority of the levels the optimal solution is to throw your bird at very specific angle and exact moment. If you try to randomly hit moving targets you are doing something wrong.

That said I really enjoyed this update even if it was a bit small! :-)

Oh, I certainly agree that there are clear strategies to devise in these levels. The main issue for me is that I don’t like having to time my shot; I really prefer being able to take time to scope out the puzzle and get the aim just right. That’s especially true when there are, for example, a couple of pigs moving out of sync with each other, and their optimal alignment comes twenty seconds after the level begins. That’s very annoying to me.

Destroy the space needle? And just when it was turning 50!

I can confirm that the “where no bird has gone before” bug is fixed. I purchased DZ some time ago and did not have the achievement but it is there as of today’s update.

Thanks @PlayDBird. Before I mark it as confirmed, can I ask you a follow-up question? Were you affected by the “Offline Achievements” bug to your knowledge?

Could you describe it Slim? Not sure I know what it is?
I am rarely offline while playing AB so I’m not sure I’ll be able to help, but I’ll try.

OK, equivalent question: Do you know which achievements popped up basically immediately after you updated your app?

I’m sorry – I noticed some did, but I did not pay attention.

Just a few – three tops – that I can confirm.

I can say that all the achievments that are listed are the ones I’d expect, as are the ones that are missing (yet to be achieved by me). The only one that’s mystifying me is the menu popper or whatever it’s called. I know I’ve popped a lot of pigs on the various menus so I thought I’d have that but I don’t even see it.

@AMslimfordy I dont know if this is relevant to your question or not , but I had the “Centripetal Force” achievement pop up as soon as I updated

OK, thanks DBird. Hopefully we have a few other people confirm this as well :)

Thanks kevin, we have that one listed.

Hey Slim, I was affected by the “Offline Achievements” bug. As soon as I opened the game, 24 achievements popped up from the bottom right corner.

How can I update Angry Birds Space? I don’t see any update button :/

what platform are you on? :)

Now that’s what I call a birthday present, although a little late sine since yesterday was my birthday, but a present nonetheless!

I love that you now get a space eagle for free every day. :)

Did anyone saw, that you save an egg with an antenna, at the end of the update. Watch it in 3-10. Could this be a new playable character in next update?

makes sense why there are few levels…moons are smaller right?
also i think that Rovio is toning it down with the # of levels right?

Well, this stinks for me since my device isn’t compatible with Google Play.

When does Space will be available for symbian devices…?

Rovio has not confirmed Space will even be out for Symbian, but it may, since AB:Space recently came to the Playbook.

Rovio has not said IF it will be available for Symbian, so WHEN is a different question.

Looks to me like they fixed the “quick count” issue that I had been having on some levels of space. Now we just need to add the fast forward option that ABO has so when there are obviously no more points to be gained the user can skip right to the level complete screen.

I know! Finally, I can actually play for more than 5 minutes without a crash!

Mine still crashes every once in a while – do you see this?