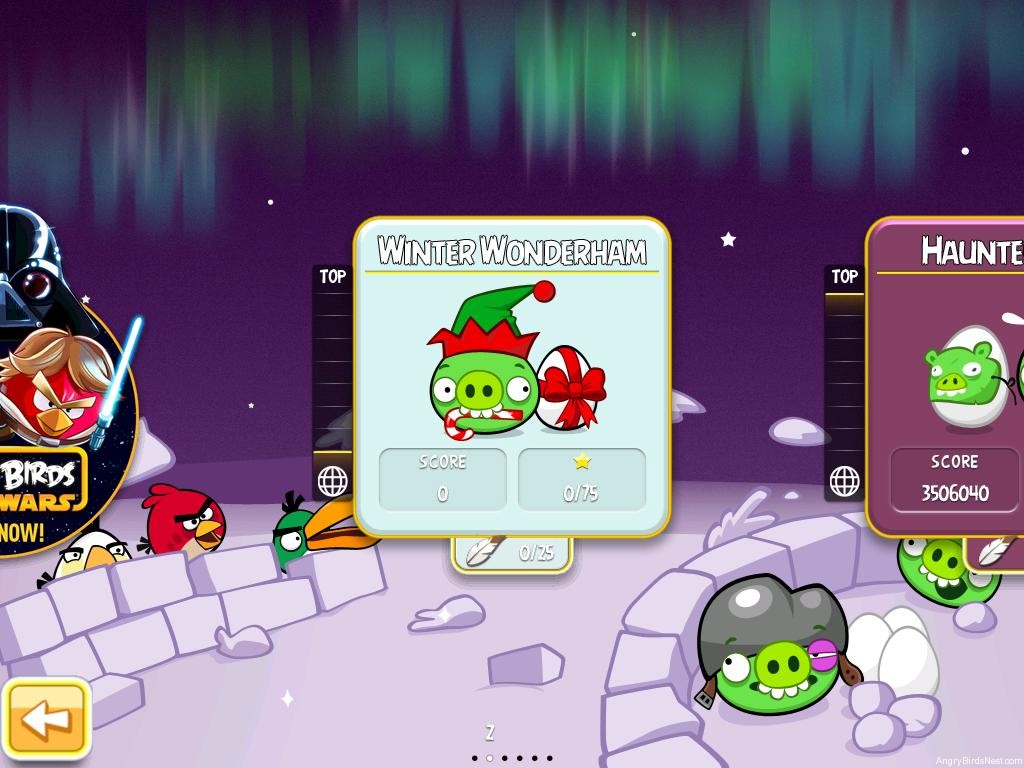 Happy Holidays, to one and to all. Welcome the Winter and say goodbye to the Fall. Be merry and happy, whatever the reasons. But do not miss this update to Seasons!

That’s right, the Winter Wonderham update to Angry Birds Seasons (v3.1.0) is now available for iOS, PC, Mac, NOOK Color, and Android via Google Play and the Amazon Appstore. More platforms will be getting the update very soon. We were the first to confirm this update, posting some GameCenter imagery about two weeks ago and exclusive Rovio-official details yesterday. This is Rovio’s third episode to celebrate the Christmas and holiday season, and as is Rovio’s tradition, this episode is rolled out like an Advent Calendar!

Participate in the ABN Winter Wonderham Challenge starting each night at 7 pm PST!

Daily Levels at 8AM UTC!

What is that intel egg on opening level 5?

It’s kind of golden egg (but not gold in color) with 4 levels inside.

but it stills Christmas theme

No, it has the same theme as a web game from a few months ago called “Angry Birds in Ultrabook Adventure”.

It does have presents, snow etc. though.

I have an update to (3.1.1) but my graphics are the same, dont see any difference

@hristaki032: What type of video card and monitor are you using?

We have a forum post for PC issues: https://www.angrybirdsnest.com/forum/discussion/1436/discussions-for-pc-users

@amslimfordy Has anyone reported having the Mighty Eagle on ABS (Wonderham)with this release? I have it for sure, but I moved from Amazon to Google on ABS. If no one else has it the only other possibility would be Rovio giving it directly to me, which seems incredibly unlikely, but I did have a conversation with them about Return Of The Jedi, not being advertised as free for 3-starring Tattooine and Death Star. It just seems really strange that I have seen no other people mention it.

I don’t understand your question. To my knowledge, the Mighty Eagle is not available for ABS on Android.

@amslimfordy I know no one has reported having the ME on ABS. However, somehow I have it and there is no way that Rovio would have done it just for complaining about ABSW RoJ just for me. The only way they could have would be my email for Twitter and Google Play are the same. The same day a few hours after I spoke with them they posted the RoJ information on Facebook, Tweeted it and put it on ABSW web page. Why give it to me and not make it available to purchase for others, it defies logic. I check daily and it is still there.

Are you kidding? I remember you mentioned it but I hardly expect Rovio would make such exclsivity for one player. I don’t have ME in Seasons nor possibility to purchase it in Google Play Store.

@cosmo2503 That’s what is confusing me. Unless it has something to do with transfering form Amazon to Google. However, it wasn’t available on Amazon either as far as I know. No complaints, just don’t understand how it is possible.

@amslimfordy There is 3.1.0 update notifi. In PC. Should i update? I am trying to be sure if this has bug(like wiping score) in this

oh. I thought u already had updated. But thanks

I have v3.1.0, but not higher. I’m in my office now and not near my laptop unfortunately.

@amslimfordy no hurries! Finish work and then update post with details :)

When i updated Angry Birds Seasons to V.3.1.1, when i pressed the play button, there was a error that something is wrong with the Lua file, but i repaired it and it works fine. Did anyone got this problem?

Not that I’ve heard.

Looks like i’m the only one with this problem on the PC version.

@amslimfordy – there is a Seasons update on IOS right now. I am downloading – I will let you know if there is anything noteworthy. I’m wondering if the Intel levels will be included.

No Intel levels. Maybe Apple is not comfortable giving Intel free advertising.
The only thing the update states was that some minor bugs were fixed to improve the user experience. Maybe some of those “Golden” issues were repaired. IDK.

Thanks, I don’t see anything new either. From my conversation today with Rovio, it won’t fix the Big Items issue.

I don’t think it’s an Apple thing, because they’re not on PC either and AB PC games are by Rovio alone.

There is also a new feature for PC : when you explode the black bird, the white bird, and the TNT, the screen will shake to make it more realistic.

Hi @orangebird09, this was introduced with v3.1.0 across all platforms.

And don’t forget that Bubbles’s puff (orange bird) would shake the screen, too.

don’t forget about the Orange Bird’s inflation! it makes the screen shake as well.

After updating any angry birds game, can we remove the setup file from AppData/Roaming/Rovio directory? I hope its not harmful….

I wouldn’t remove those files.

I thought Level 4 will be something special, just a castle in the background.

I was expecting an entire new backdrop.

Me too I was disapointed

Great update, but it took me two hours to 3-star level 1. And it’s pretty much more of the same gameplay that we got earlier on in Seasons. Even the original game has something revolutionary about it (the King Pig feature, which I LOVE. I’d be happy to keep this game if there were more features added in updates.

How do I get this update on my iPad? I already have Seasons, but no Wonderham.

Simply check the iOS AppStore. You should have an update available.

why is my seasons icon writing 1 on it? like an update on app store? do i need to do smthg?

Means that your eagle is ready to use :)

mmm not sure i get you.. i use all the time my eagle

i closed the app and opened it again. it’s back to normal. thx

Does anybody know if the intel blue egg is one of three golden eggs planned for winter wonderham ?

”@AngryBirds
What’s next from the birds this Winter?!”

Maybe they planning something new?

I think it’s just a list of what is new: Winter Wonderham and the Winter Tournament in AB:Friends.

yeah but why they saying: ”whats next from the birds this winter” ?

Glitch on lv 10 (tomorrow)- it always says available in one minute, even though there are hours until its release. Anyone else seeing this?

Mine is functioning properly.

It appears to be fixed now.

A little antsy, are we?

Well, the in-game Golden Egg for Season’s Greedings didn’t appear until level 13, and the one for Wreck the Halls wasn’t until level 15.

Chris patience is a virtue. Relax the golden egg will come soon im sure :) Im just playing the levels so I’m waiting patiently 4 a golden egg 2

Does Stella seem stronger or is it just me?

Has anybody noticed that the background on the level selection screen is kinda different on the top unlike other devices? (I noticed that on PC)

Sorry I don’t know where to post this, but I am sorry for not coming here regularly. I was busy with other things and didn’t have time for Angry Birds for a while. Plus, I lost ALL my progress from all my games so I have to start over (@kathy I remember hearing you experienced this too??) so I hope you will welcome me back although I haven’t been here for a while. Thanks so much ABN!!