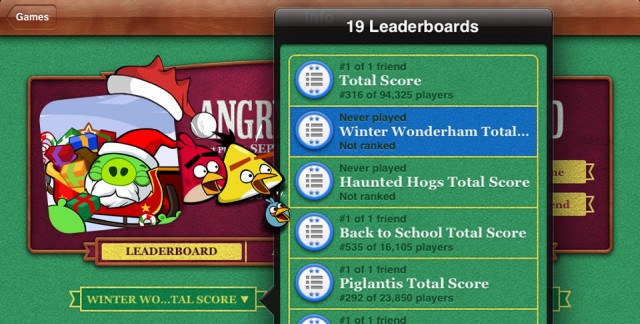 ‘Tis the season for eggnog hangovers, twinkly lights, bolded text, and … Angry Birds! We are here to bring you another worldwide exclusive! No reason to ask Santa for an update when Rovio is feeling as generous as Ebenezer Scrooge after being visited by the Ghost of Christmas Yet to Come. Angry Birds Seasons “Winter Wonderham” will be the third annual winter update to this epic franchise. Like Halloween, it’s a true tradition.

Update! Many of the below items have been confirmed by Rovio in an exclusive release of information. Check out our latest post to see what has been confirmed, and to grab a Rovio-official wallpaper!

Now, details are very very sparse at the moment, but we are willing to speculate about a few things. Our disclaimer here is that absolutely nothing is confirmed or official, but since these questions will likely be asked by fans we will express our opinions below.

Each bullet below is purely speculation. I am stating it here so that I don’t have to rewrite, “We think” every time. Okay, with that said, here’s what we think (zing!):

A big thanks to @Nobelak555 for tipping us off about this! We will keep you abreast of any new info as it becomes available.

Yep! Totally true! I like their traditional objects like pumpkins for Halloween, snow for Christmas and also fireworks for Chinese New Year!

Slinging in a Winter WonderHam!

I love Christmas Its always a jolly time………..BUT THE ANGRY BIRDS MAKE IT BETTER :D

Yes The Halloween and New Years Special is alway a great Thing :-)

Has anybody followed AB on Facebook to find out when the Hoth update is on ABSW?

Considering the app was just released a couple weeks ago, I don’t expect it nearly so soon.

Star Wars was released November 8, only 12 days ago. Considering that they are working with LucasFilm, I wouldn’t expect an update for about a month.

you mean disney they bought the company

Disney own Lucas Film, But it is still Lucas Film that AB are working with :)

But when I tap the Hoth planet it says “Follow us on Facebook to see when the update comes out!” I don’t have FB, but I was wondering if anybody else had.

But they havent announced it yet on FB, When they do someone will post it here no doubt ;)

I think that since Disney is like a… moneybegger?, I woudn’t expect any update in a month or so. Or even a year.

This seems like an unjustified criticism. Look at some of the big Disney-produced iOS apps, like Where’s My Water? It has received pretty steady updates. Add to the fact that Rovio is the true developer of this app — it was merely a partnership with LucasFilms to use their copyrighted materials — and Rovio has been nothing but consistent in terms of updates.

It will come at 4pm in my country and I also can’t wait!

Does anybody out there know when the final 2 chapters of Bad Piggies are to be released?

I haven’t heard any rumors yet. Though if I had to speculate, my guess would be that both ABo and Star Wars will receive updates before year’s end. However, I would also speculate that both updates would be partial (e.g., 15 levels of Bad Piggies and either 10 or 20 levels of Hoth).

Disclaimer: All only speculation. I have no inside information at this time.

I think that the 1st update will be for ABS on the 1st of December then ABo update on December 11 because it is the day AB was released so they might release something for there birthday (right?) and then ABSW and BP but I am not so sure for the last 2.

I highly doubt that. It would be illogical.

I agree with Slim. They would have to change the world numbering.

Happy Thanksgiving!!! Thankful for Rovio and everyone here at angrybirdsnest!!!

Back to you! Enjoy this cool AngryBirds Thanksgiving Image Rovio posted!! https://lh3.googleusercontent.com/-Lvw9i0krsSU/UK6lB1ZufKI/AAAAAAAA_qQ/vCHdZ519GCI/s843/AB_thanksgiving.png

This will be epic!!!!! I love christmas!

Anyone want to speculate what level will contain the hidden golden egg? I will pick the 22nd. If we survive the end of the Mayan calendar on the 21st, the egg on the 22nd will be our reward.. ;-)

I also hope we get another New Years Egg to celebrate 2013!

LOL I say 15th for some reason.

I speculate that 14th contain the Golden Egg because Season’s Greedings’ Golden Egg is on the 13th and Wreck the Halls on 15th,

I need help i had to factory reset my phone on android and i moved game abo abs abr absp absw and amazing alex. now the progress is gone please help me!

I’m not sure what sort of help you are looking for. We can’t recover deleted data.

Cool! Should see some blue birds in this one.

I hope this version will have pink birds in all levels.

I don’t think all levels would be completely realistic, but most likely a good majority of them. I’m wondering what will happen to the pink bird if she tries to lift up snow.

To be honest, I hope the pink bird is afraid of fold weather and we don’t see much of her :). I know we all have our preferences, but she is waaaaay down on my list of favorites-tied with green boomer bird. Either way, I am looking forward to Winter WonderHam!

I have to say that I disagree. It actually depends on how you use the bird, or if you know the right time you use it.

this will be fun and I can not wait for updating winter wonderham, if I can wait almost there

Any fresh info on the update? I can tell you that Saturday can’t get here fast enough. Luckily, I have a task that is sufficiently distracting….

It was shown in the Luke and Leia trailer video, but it’s good to here confirmation ;)

We’ll possibly see a lot of ham blocks in this update.

Lots to look forward to for iOS players of Angry Birds & Bad Piggies! I quit playing web versions as my PC & laptop are both dinosaurs & makes playing near impossible. So I just play what is available on my iPhone. Not sure what the release order will be but here’s what I think it will be:
AB Seasons: Winter Wonderham (one per day from Dec 1-25)
AB original: Bad Piggies (world 2)
ABSW: Hoth
Bad Piggies: Flight in the Night (2nd part at least)

I tried to update the winter wonderham and it only downloaded to game 7 and then I get a message that I have to connect to the internet. How do I get the full game to install, I have tried several times and so far no go

You will likely have to connect to the Internet the first time you play a level (only the first time for each level) so that it can download the level file and check the date (this prevents early access).

Hi thanks for your help but it didn’t work, talk about angry birds, I’m becoming one..lol