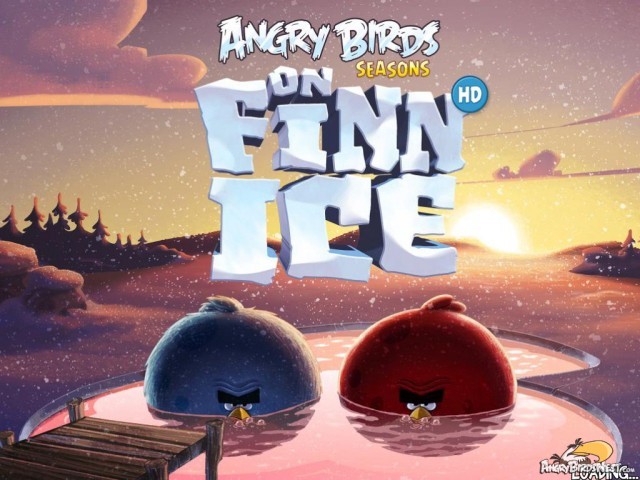 Grab your passport and skis! The Angry Birds are vacationing in their homeland of Finland. As part of the ultimate festivities, Angry Birds Seasons On Finn Ice (v4.3.1) is now available for iOS and Android via Google Play and the Amazon Appstore.

This update marks the fifth holiday-themed Advent Calendar, which is perhaps our favorite tradition here at ABN!

Participate in the ABN On Finn Ice Challenge starting each night at 7pm PST! A new level each day! Do you have what it takes to top the leaderboard? 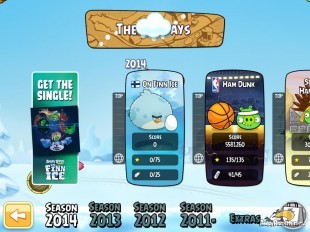 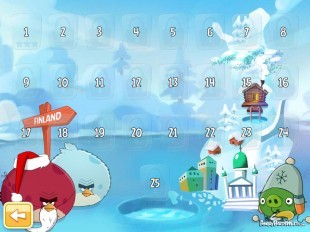 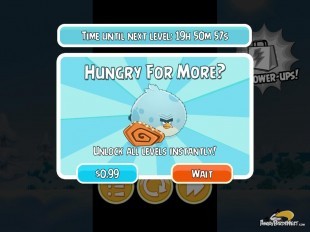 @espleyk — Hope you realize that AngryBirdsNest is not run by Rovio. You should create a support ticket at the Rovio web site and complain directly to them. BTW — Finn Ice is run as an Advent-style episode, which is very much loved by many. If you are impatient, like me, you can pay $0.99 to immediately unlock all the remaining levels. I don’t consider this money grubbing on Rovio’s part since I don’t even remember when I last paid anything for years of playing AB Seasons. I do, however, agree with you that Rovio in general has gone overboard in making it difficult to enjoy their games without paying ridiculous amounts of money, which I refuse to do.

Thanks for that – sorry, no I hadn’t realised AngryBirdsNest wasn’t run by Rovio – I shall take my rants elsewhere. Also hadn’t realised Finn Ice was an Advent game.
I would be happy to pay the $0.99 – it won’t let me – just keeps telling me I need to log in to purchase, but then won’t let me go to the shop. Anyway, that’s me ranting in the wrong place again. Cheers

Can ABN post an annotated image of the Finnish tourism trivia scrapbook from the bonus levels, and explain what level each part of the scrapbook came from? I’ve just finished Level 8, but my scrapbook only has six images in it, and I can’t seem to find the missing two.

Does anyone know how to get the eagle 100% on board 1-11 and 1-20 of On Finn Ice? I feel like the threshold is high because I have destroyed literally everything and cannot get past 86%?? Please help.

I’m investigating and will ask Rovio.

I have those levels recorded @amslimfordy (sorry, missed your ping)
I am currently releasing them on a daily basis.

ME 1-11: Use all the birds to clear the sand blocks, and topple as many floating stone blocks as possible. Then drop the can as close to the sling as possible, on the ramp.

ME 1-20: Clear as much as possible from the left side of the level. then drop the can at the base of the light post (on top the hallow wood block)

You are a pig amongst guinea pigs, @sal9! (That’s meant to be a complement.)

I’ll give these a try later!

Can you offer some guidance @chriss? I’d really appreciate it.

In 1-11 (android, Galaxy S3), I once got 98, and another time 99; I usually get around 85 and cannot tell any difference with the times I got the higher percentages… Might it be that there remain some diamonds, hidden in the snow on the floor?

Well, this is strange. I woke up this morning to play lvl 10, and when finished, wanted to open lvl 11 to see if there was an image for the scrapbook. Instead, the level OPENED! Every single level OPENED WITHIUT HAVING TO PURCHASE!! This is incredible! Anyone else experiencing this?

Does the Blue- Colored terence does anything special?
I dont have the game..

He has a special ability. Check the video in this post: https://www.angrybirdsnest.com/angry-birds-seasons-on-finn-ice-trailer-reveals-new-bird/

Does anyone have a full scrap book? I 3 starred all the levels, found the golden eggs, completed the 3 eggs levels and even got the feather on every level, but am missing 3 pictures from the right hand page of the scrap book. Wondering if it’s just me, or everyone else too.

Just saw relevant post in the walk through for 1-25, that there are some levels that after you finish them you have to press the continue button. Scrapbook complete!

Please help. I’m having to start all over again bcz I had to perform a hard reset. Haven’t played this since last year. What do I need to do to fill the scrapbook?