Angry Birds Seasons celebrates its 5th birthday with it’s biggest update yet! Invasion Of The Egg Snatchers (v5.3.1) is now available for iOS and Android via Google Play, with more platforms coming soon! 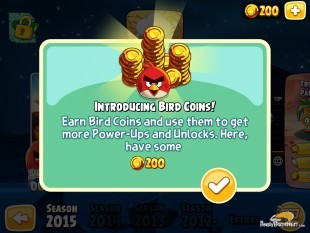 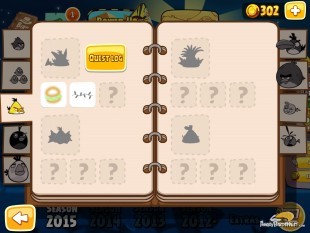 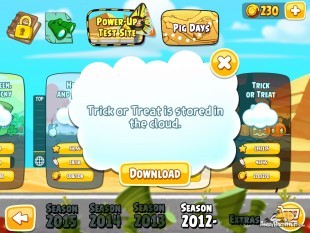 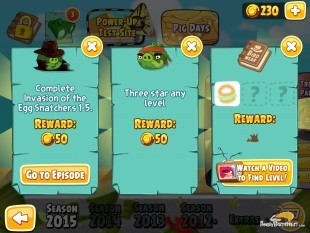 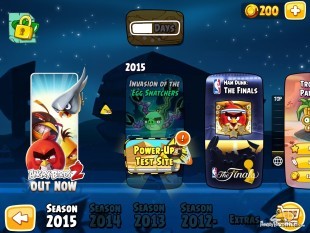 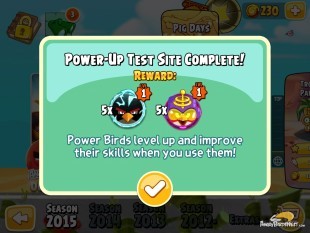 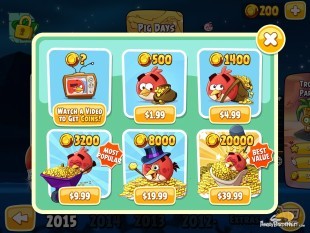 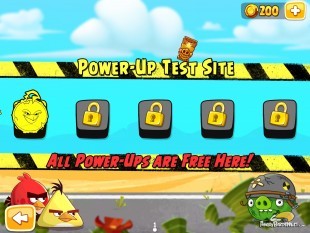 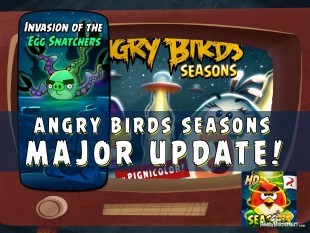 Use-> at bottom of video to progress forwards

played the game, downloaded pig days and all episodes up to 2013 from cloud and now the game won’t start up anymore it’s stuck in loading screen

@corporalpig hi, had same problem. This will work: play at lease one level from the downloaded levels ( to play the episode offline later).

To fix the loading issue, go to settings, applications, abseasons. And clear cache one time, and if it doesnt work do it again. Worked for me

tnx, I will try it out

@corporalpig similar issue for me too- the game works as normal but every 3-5 minutes it freezes, and I have no other choice to restart the app! ive (tried) told Rovio to make a fix about this, but they aren’t responding- really frustrating

so I need to wait for an update than HOPEFULLY fixes this? -_-

Tried clearing Cache twice now but it didn’t work. And I found out that Seasons doesn’t start / crashes when you are offline

rovio should add telebird, bird coins, missions and bird wear to angry birds and a new episode too

This is why I LOVE Angry Birds!

So many bugs! Level 1 of Invasion of the Egg Snatchers freezes and the game crash, and Seasons’ Anniversary level happens the same thing.

Anyone know why this update wasn’t posted on the regular ‘update’ page? It helps to be able to know where to go to find info on new updates. I had to dig around to find this.

Is anyone else having problems with the daily missions? Every time I get a mission that asks me to beat my score to earn more coins it doesn’t work. I play the level and beat my score, but it doesn’t give me the coins.

Haven´t given any attention to missions until yesterday, but level 9 did exactly that. Play mission -> improve 3k -> no coins, no indication of success :-(

Thought I was imagining this, works one out of 5 times….very frustrating since I had already gone back and replayed almost all levels for fun to beat my high scores.

Has anyone else managed to complete level 5 of the power up test site without using any power ups???

It can be done.

New levels, that’s fine. But what really bothers me is that Rovio has introduced those annoying gifts containing PU’s. We’ve had them now and then for years in Rio. There they yielded 3k. These new ones in Seasons seems to yield 5k.
I have always restarted once I hit one in Rio, and I’m not gonna start benefiting from them now in Seasons. But I seem to remember reading that @admins allow scores achieved with gifts?
I’m afraid it will ruin the leaderbords and the daily challenge. Well, I can only hope that those who enter such scores on the leaderboards are honest enough to be open about it.

@gladvold are you talking about the red gifts that appear after you start the level? They cover a pig that’s in the level, so they don’t add a bonus 5k to your score, it’s just the normal 5k you get for killing it.

@karen68 Oh, I see! Then I’ve misunderstood, I thought the gift added points like they do in Rio! Thanks for sorting this out, all is well then!

Does anyone have any information about this bird-wear stuff? I mean, where can the items appear? In all episodes, back till 2010? Or just the last ones? I have 11 items so far, found all of them only in Invasion, Tropigal and Finn Ice. But now i have a wing in Quest log and cant find it anywhere…
Also, the videos arent working it always says ‘oops! there are no videos right now’… same issue in bird coins shop, first window is always grey and tells me to ‘come back later’

Pig Days have near all of the items. Wing is in Lefthanders Day level.

ohh. too bad that many levels of Pig Days arent working since the latest update…
anyway, thanks for the answer

Yeah, played Angry Birds Seasons since day 1 on my iPad 2. Noticed the only thing updating was the Pig Days for a long while. Then I finished all the Pig Day levels and sat, as usual, waiting for new levels to come, replacing the “coming soon” cloud…and waited, and waited…nothing. Went to the app store and saw an update available and went to donwload it wondering why it didn’t appear as a notification badge on my app store icon. Turns out the update is only for ios 7 and above, and it asked if I wanted to download an older version. I figured, sure, at least I’ll have more Pig Day levels to play. Downloaded, installed, opened it up and…”coming soon” still there. Ipad 2 is old and can’t handle any ios above 6…so, like Epic (another game I had played since day 1 but it was not able to run on my ipad and Rovio’s only suggestion to me was to go out and buy a new ipad!!!???), it will be deleted from my old workhorse, giving me room for apps from companies that still support older hardware and actually care about long time players, not telling them to go out and buy new hardware…um, if I could afford to do that…yeah, don’t think I’d install any Rovio game apps on it.

I guess we are old school, huh?

Love the update… always nice to have more levels in the original series.

Of course.. even after the update, and another to fix some performance issues… Pig Days crashes with just about every level, and some of the extras that you can find, in the “collect here, go to this level” also causes the game to crash.

Other than that, the new levels are really fun to play.

Hi, it’s Thomas again. I’m having a serious bug with the cloud system where it doesn’t allow me in most of the earlier episodes of seasons. Please help me…

I had this problem too. However, I spotted the solution in a comment that Rovio had posted a reply to a critical review on the Google Play store. Here’s what you do: at the start screen, click on the little cog-wheel in the bottom left. That will bring up a few options – just click on the cloud. All the levels you’ve got stored on your device will now be deleted. When you want to play any of them, just click on them, and they’ll be downloaded from the cloud. Your points don’t get deleted. I did this and now all my Pig-Days episodes are working and I’m just about to finish the Treasure Hunt.

Rank: Out of this World with 2555 points
By klamsauce (@klamsauce)

Wish there was just a way to disable powerups if you don’t want to use them. This was an option(an obvious one) before the update.

Trying to get high scores involves restarting levels constantly. With presents always spawning and the “ALLAKA-BAM” prompt appearing once every 3 minutes it gets extremely annoying for players like me who just want the game in its simplicity.

Having issues with completing the bird wear round 5 year Anneversay where getting an icicle is the goal. Anyone play this level??

@andy-figura I’m not sure which level you are referring to, but using Mighty Eagle is another easy way of doing it.

not sure you are posting in the right area @andy-figura. yes the icicle is a tough one to break.in your quest challange the level somtimes can only be a hint. i.e had trouble with the sugestion, found that going through winter wonderham levels, any levels with icicles were avaliable. managed to get it after several tries at diff levels. got it in level 1-15. happy flinging. p.s icicle below big boulder @sal9

You can change the level and still fulfill the quest? I’ll have to try that myself. I tried everything to get into that round clock thing in PD5-2 and couldn’t do it, I’ll have to try changing the level to WW1-15.
There is also the fish in PD4-3, low and on the right side of the slingshot, nothing will touch it, not even power-ups.

Hi, regarding bird-wear… With the latest update, I “lost” some of the disguises I already had. But what is really bugging me is that no more quests regarding bird-wear are coming up; all of them are about beating my scores… Thus, it is impossible for me to complete the bird-wear collection. Has this happened to anyone else? Thanks!

I can’t find the hidden hook for the quest in egg snatchers 1-7.

I found it but to destroy it, use Mighty Eagle.
Hook is behind the box at the end of the rope carried by helicopter.

Do you mean behind the crane? I have completely obliterated the barrel held by the helicopter, and still have not seen the hook.

Where is the stupid hook on the bird wear quest 1-7 in the invasion of the egg snatchers.
This has been one of the worst angry birds games as far as glitches.
Not a favorite