Angry Birds Rio is Now Available in the AppStore!

If you’re an Angry Birds fan that uses an iPhone, iPad, or iPod Touch today is going to be a happy day, as Angry Birds Rio is finally here.

Here’s a breakdown of what to expect from Angry Birds Rio:

Here is a cool video the Scarbzscope put together that shows some of the actual menus and game play.

Below are some screenshots of some of the various aspects mentioned above. As always, 3 star and “hidden fruit” walkthroughs will be coming soon! 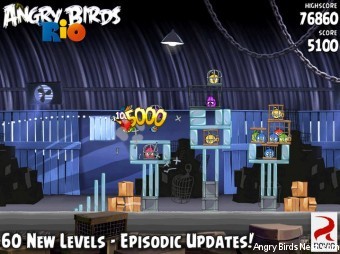 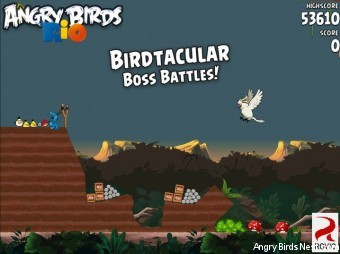 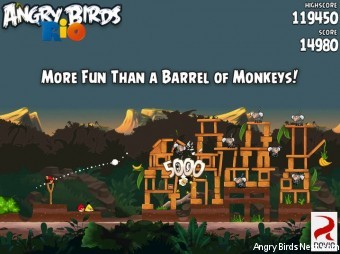 I Love the new game but only 60 levels?!?! I feel with the following they now have 120 should’ve been offered off the bat anyone else agree?

60 is enough for me until the next update. I’m biased though since we have to keep up with all this stuff. : )

Hey dude, do you know what time will the Angry Birds Rio comes to pc?

Not sure, but I would hope soon.

Why if it’s free I still gotta put my credit info? That mean they’re gonna charge after awhile

You’re getting your info into the amazon appstore, so you can make other purchases later. Rio is/was free for android.

I have never seen Rio free on the Amazon App store for Android and I got the App store app the day the game was released for it! Do you know when the Android Market is going to get it?

I think there is something a little unclear about this post.

Amazon Appstore has both versions of Rio: the paid, ad-free version and the free trial version (3 levels per episode).

Amazon Appstore has the v1.1.0 (up-to-date) ad-free version available. However, NO system has the ad-supported version yet. Will be a few more days, according to Rovio.

Bird Leader or anyone who has an answer:
When is Rio coming to the Android Market? People outside the USA who has Android cant (ARGH!) get Rio until then…

I wish I knew. Rovio has been quite vague. The last response I saw from them was, “a bit later”. I know it’s frustrating, but we have no control over it.

This new game is awesome!!! Download it now while it’s free!

Love love love Rio, already got 3 stars on all levels without checking your website once(as I have done on many occasions on previous angry birds games)….but I’m stuck on the boss bird on chapter 4-15. Do you have a video for this one please? I’ve got over 57,000 and only 2 stars…..it’s driving me crazy!!!

Lisa, the walkthrough for 4-15 was just posted. You can check it out here.

Just dowloaded from Amazon App store for Android. It’s not a hoax. It’s free if you have an Amazon account(anyone that buys music from them should already have a credit card on file.)

I downloaded the .apk file somewhere from internet and installed on my phone, as Amazon App Store is not available in my country (the Netherlands).

Me too, and it works fine!

I had 14/15 pineapples and 14/15 bananas…3 stars on almost every level and when I opened the game this morning all of my pineapples and bananas were back to ZERO but I still had all my stars. What Gives?

That sucks! This is a long shot, but I wonder if it has anything to do with wi-fi? If you don’t find help here you might try [email protected].

thanks, I already contacted them…waiting for a reply. Just curious, what would WiFi have to do with it?

Well, there are certain features that sometimes require wi-fi to work. It was a long shot.

It would be great if Angry Birds Rio came to the Android market, but no its always the last place to get the newly released games…… can’t they just release it on every network at the same time?

I can’t say for sure, but I doubt it’s not that easy. In a way, it’s amazing that Angry Birds is available in as many places, and on as many platforms as it is. Rovio said it’ll be in the Android Marketplace soon.

I’m sure this has been answered somewhere, but when looking at achievements in Angry Birds Rio, why does it show 38 but I only see 34 in the list?

There are still secret achievements yet to be found.

I think that angry birds rio is now available in the android market. If I want to gt this version from the market what will it do to the rio game i have already gotten off of the amazon market?

I imagine it will prompt you to overwrite it. If you have the ad free version from the Amazon Appstore I would keep it. Just my 2 cents at least.

I’m trying to install Rio, but installation from both Amazon and android is unsuccessful. Any ideas why our what to do to fix this?

on angry birds rio a may update i don,t no when it will open what i do now is that it is going to be fun!

We just heard it might be out on thursday.

This game is awesome!

I loved the movie and the game is great too…the graphics are even better than the original angry birds!

The best type is seasons because it’s known for tons of updates, but I liked the idea of a movie AB. Maybe next you can make a Harry Potter one.

Agreed that Seasons has the most updates, but not Harry Potter because some people would consider it witchcraft.

You realize no one has commented on this thread in 8 months?

New Animals and New Achievements have the same picture, is this on purpose?

Strange. Something may have been crossed there. If it were a more recent post, I would investigate further… I’m willing to let it be though.

What’s the difference between a marmoset and a monkey? Which are those…monkeys or marmosets?

A marmoset is a specific species of monkey.

You know what i don’t get about ABR?
on their emblem,it shows the red bird over Rio with the classic and seasons open mouth
the red bird in ABR contains the chrome mouth.It’s a small little notice,but i was just wondering why they did that.