Before I begin, let me state that the following article has no precedent in the history of Piggy Island. Never before have so many piglets owed so much to the efforts of one pig to transform Pig Society now and forever.

Last weekend’s fitness frenzy resulted in a number of pigs participating in what seemed to be a series of Spartan-esque workouts led by the Corporal Pig, transforming Flabby Green Blobs into Pig Iron in two days flat!

If push-ups, Shaolin Kung Fu cartwheels, free climbing and bench presses are not enough then check out this supplemental exercise created by Mahdi Prs! It’s certainly as intensive and mindset-changing as it looks! We call that exercise… the Brain Damage! No kidding…

Three hundred of King Pig’s finest then paraded forth to the mountain pass at Pigini Beach of their own accord, presumably to defend our great bacon nation against an invading horde of “more than a million” Angry Birds led by the Mighty Eagle while the rest of us mere mortal piglets concentrate on feasting and sleeping off the weekend before the impending doom of Monday struck us all down with endless torrents of blue-hued boredom.

As the three hundred passed outlying towns and villages, the sight of such pristinely pig, Greek physiques garnered immense attention from the peasantry, for none have caught sight of such magnificence what with a regiment of towering men clad in glistening steel, powered by fifty diesel engines per muscle strand (sic). Here, we see the King Pig, Smooth Cheeks the Large, , Great Leader of the Expeditionary Force pose for the cameras in a rare impromptu press conference in King Pig’s natural habitat – a beach party! (Source: Government Press) 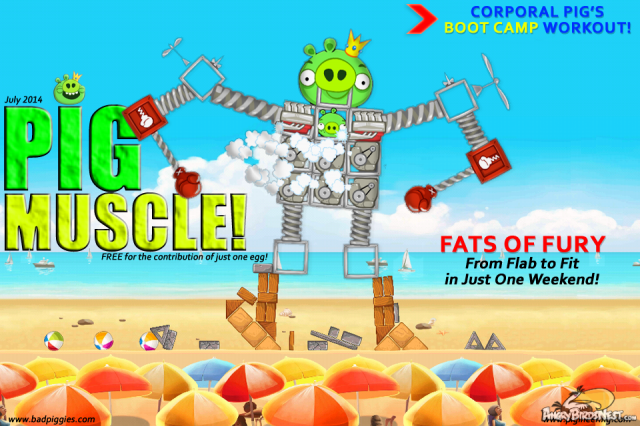 Pig Muscle July 2014 special edition – FREE, for the contribution of just ONE EGG! What are you waiting for!?

And with that one single centerfold appearance in a never-before-seen Pig Fitness publication, the King Pig had changed Piggy Island’s perceptions of its government as a whole.

Will the King Pig be hailed as the great leader of a piggy fitness revolution, motivating our green couch potatoes to go out and do something, anything, or will he be universally mocked into the next Great Depression by legions of laughing piglets?

Only time will tell us how this new pork-paganda effort from the King Pig Office will fare, but one thing is certain. This particular Weekend Challenge was totally ridiculous, but we adore the awesome Bad Piggies Social Media team from Rovio that much more for always giving us something fun to do (and make fun of!) each week.

And on that note, please do check out the rest of the Bodybuilding Pigs on the Official Bad Piggies Facebook Page, because they’re awesome fun! You may have to login to Facebook to view all the glorious hunks of bacon in the comments section of this image!

Check back later this week for some fun new Bad Piggies developments such as underground mining and whatever Rovio thinks of for the next Weekend Challenge. I may not do the next installment of the Bacon Space Program this soon as I want to stay away from rocket and aircraft related topics for a while. In the meantime I’ve already put in my suggestion for a motorcycle building challenge because as they say, Two Wheels Bad, and that means Good for Piggies!

It may sound a bit off topic talking about motorcycles in a pig fitness article, but to me, nothing’s better after a good workout than a nice cruise on country roads. Never fails to make me feel that much more appreciative about life in general.

I haven’t built a proper Hog for my green Hogs, so I’ll make do with these fun little Malaysian mopeds!

Another great display of the creativity of the human spirit.
In addition, the write-up is as enjoyable as the viewing of the pig creations. Very funny and entertaining.

Thank you for your kind suppork :)

There’s another blog post in the pipeline, this time about drilling for underground egg resources!

Well, after all that workout, those piggies need lots of eggs (proteins) to gain energy :)

Yes, hopefully the next article will be out soon, because there is a new method of egg extraction from (prehistoric?) underground deposits :)

Who woulda thunk, that fat piggies exercised? Surprised to see they like rock climbing, too! LOL
Very creative and entertaining!

SO COOL! (PLUS ITS FUNNY!) did you try Tusk ’til Dawn? LOVE THE MUSIC!