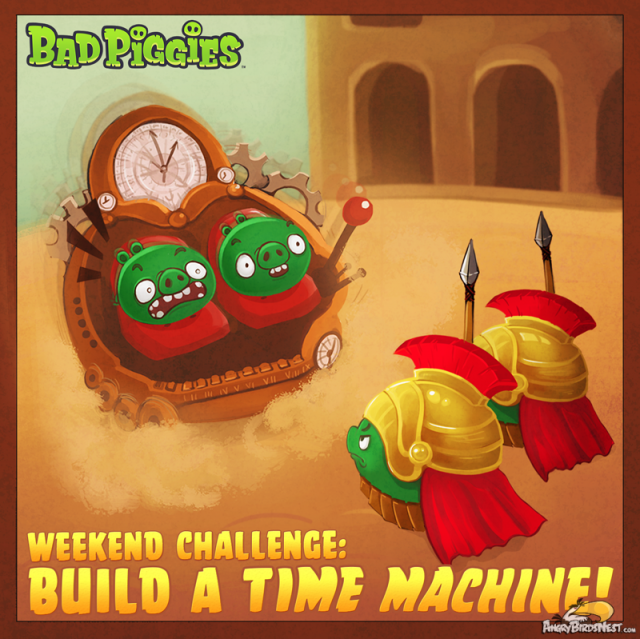 OMG! Are those Legionaries of the Bacon Empire!?

Desperate times call for desperate measures, and as Corporal Pig devises crazy “wonder weapons” to turn the tide of war, professor pigs at the Pork Propulsion Labs of the National Piggy Space Administration develop and test new technologies that have until recently, only existed in pulp fiction. But this week’s contraption definitely didn’t exist in your 1932 edition of Amazing Stories of Super Science, because we’re going Back to the Future!

Everyone knows engaging a flux capacitor at a velocity of 88 miles an hour will result in temporal displacement. But as you know it’s not the idea, but the execution that counts. 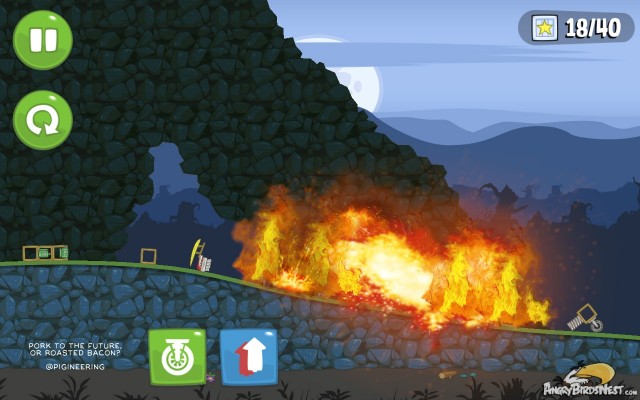 Fire trails after successful temporal displacement… or is it roast pork?

It’s too easy to put a flux capacitor on a rocket and reach 88 MPH in just over a second, but can its passenger survive the immense G forces? Is the rocket pig-rated? Did you inform the military of your rocket launch in advance so Corporal Pig doesn’t reply with massive nuclear retaliation? It’s all too complicated to comprehend for a lay-piggy like myself and with the urgent need to cook up a storm, tend to sheep and practise Good Housekeeping all at once, I decided on a vastly more elegant and simple solution.

Why not hook up a car with the flux capacitor to a locomotive and run it down a one-way track at full tilt?! Images of runaway trains may be very this moment passing through your mind, but if Spartans sought glorious death in battle, then porcine scientists seek no greater honor than selfless sacrifice in the name of SCIENCE!

Hurry up and launch that contraption before the Health and Safety guys see it! May the odds of survival ever be in your favor! 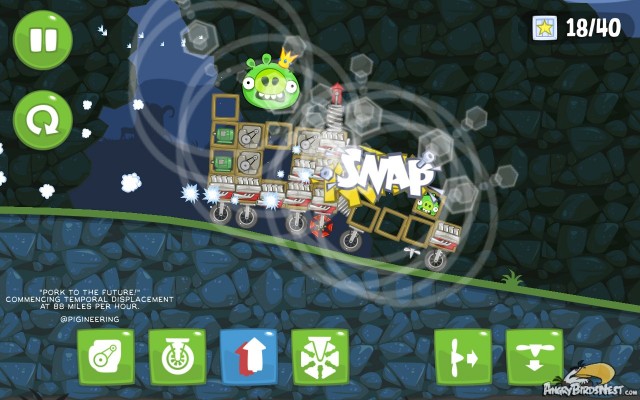 You may notice the Bad Piggies game engine’s collision detection may be temporarily disabled by high velocity impacts, thus, objects are able to penetrate the terrain boundaries. It can lead to interesting proposals such as to build drilling rigs to access underground egg deposits. 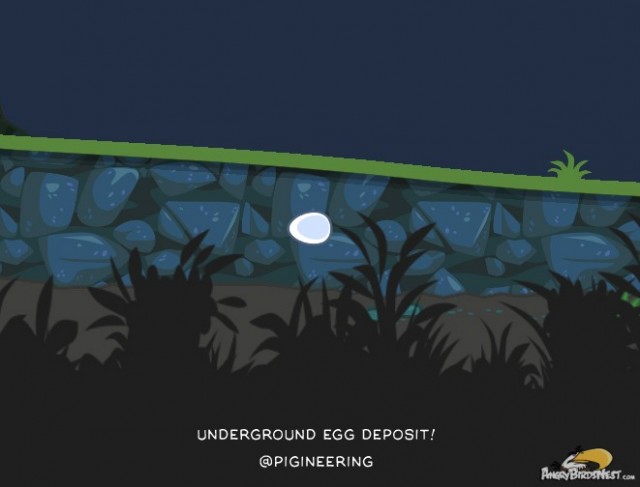 I wouldn’t call them glitches. They’re hilarious ‘unintended features’ that can be used for creative storytelling, like this instance of a freak “lightning storm in space” causing disruptions to air travel.

With the upcoming 2nd anniversary for the launch of Bad Piggies on September 27, be sure to stop by our Facepork page for more ridiculous bacon-themed mayhem. Bacon consumption is not required for participation.

Where DID that pig go???

No idea. Usually, when you double click in the PC version, it automatically zooms in on the small pig immediately.

This time, even the game got puzzled as to where it ended up.

For one of the ‘time travel’ attempts the pig even went through terrain and bounced up one level.

There’s an ongoing ‘unofficial’ community effort to make the King Pig penetrate the terrain barriers too. That’s way harder due to the immense aerodynamic drag from a fat pig.

One time I was playing and he went out like that and the camera was on the border and was trying to get to the pig!

I think it went out Game borders. That may happen on these situations.

Eggs are easy to ‘lose’ outside the map during certain ‘high velocity experiments’ :)

For a bigger challenge try and crash the King Pig into the cliffs or out of the ceiling :)

@aidbirds11, it did. the design I did was TNT under the pig and springs, and I used the glue power up and it was like a lighting storm of bacon!

Does ANYONE know that this is a parody to Back to the Future?

Rank: Out of this World with 2995 points
By Arth (@arthromod)

According to Rovio’s official Bad Piggies FAQ, Bad Piggies are not (seriously) hurt by TNT explosions :)

It got to be something in their DNA! After 3 years of researching and ‹strike›painfull‹strike› tests, ‹strike›Serious‹strike› scientists say that the thick and fat skin of the pigs may contain adamantium, even if this confirmation may lead to a total rewrite of the Wiki-Pork, the scientists still support their confirmation like any other pig does: Eating and sleeping at the work place.

Amazing machines…after all that the King Pig is still smiling!!!
Love the write-ups!!!

There are a few un-frontpaged articles on angrybirdsnest.com/pigineering that weren’t able to get featured by @birdleader yet – check em out! #WorkoutWednesday is my favorite pork-duction so far.

The problem for time travel in our mortal perspective is that, if someone successfully transported through time, how would you know if he made it?

Maybe the pig ended up in Jurassic Park or something and is now making enormous omelettes out of dinosaur eggs :)

haha it would be fun to be a small piggy in Dinosaur Land:) with huge eggs to steal..

Hopefully it didn’t get eaten by a dinosaur! :P

I’m sure if our brave volunteer would sneak up on a dinosaur nest, he can then consume some absolutely enormous eggs and become Pig-o-Saurus Oink. The volunteer was chosen based on the capacity to eat and sleep so he should be fine and dandy :)

This challenge was really difficult, I couldn’t make any idea :(
Hopefully we’ll have a better challenge, tomorrow…

i think that in the game there are two “lines” between the common space and the game limits, the 1st line is the underground line; as we can see at the photography “the egg underground deposit” that is the undeground space.The pig crossed the last line: the “2D GAMEBOX” system, when you cross that line completly you can´t understand exactly what is really happening it may be dissapeared from the game code, if you can go back from that line i don´t know what will happen.