Previously this month we were advised not to pick a Weekend Challenge theme that involved building objects that could have potential to cause deliberate harm (i.e. military equipment) so we were very surprised when the subject of Cannons was last weekend’s topic on the Official Bad Piggies Facebook page.

Suffice to say, we skipped it for something more peaceful and happened to revive a quite old topic that never quite took flight: the Flying Car.

Flying Cars had been promised to humanity as the next generation of personal transport for a long time, but for various reasons, this supposed mobility revolution in the new millennium has not occurred. Cue massive discontent and furious calls to Google for answers…

Just kidding – check out this writeup from Popular Mechanics to see why combining a plane and a car isn’t as practical as it sounds.

Meanwhile, on Piggy Island, automotive and aerospace pigineers have set aside their differences in lard and protein composition to come up with some radical new pig-mobility solutions. Depending on how you want your flying car to look like (and how conscious of you towards topics such as “pedestrian safety”) there are numerous ways to design a Bad Piggies Flying Car. Let’s scroll through and have a look at some of the aero-mobile concepts based on their historical counterparts on Earth: –

Roadable Aircraft, are, as the name implies, are aircraft that can be converted to drive on the road like a car, after removing or folding away their flying bits. An example of a Roadable Aircraft is the Curtiss Autoplane of 1917, which is regarded as many to be the humans’ first attempt at building a flying car.

Today, the sleek Terrafugia Transition is a modern example of a Roadable Aircraft.

In Bad Piggies, you can create a Roadable Aircraft by starting the contraption fully dolled up as an aircraft, and then jettison the flight engines (if any), propellers and wing assemblies upon landing. The challenge is to drive away without being snagged in the ensuing disintegrating mess! 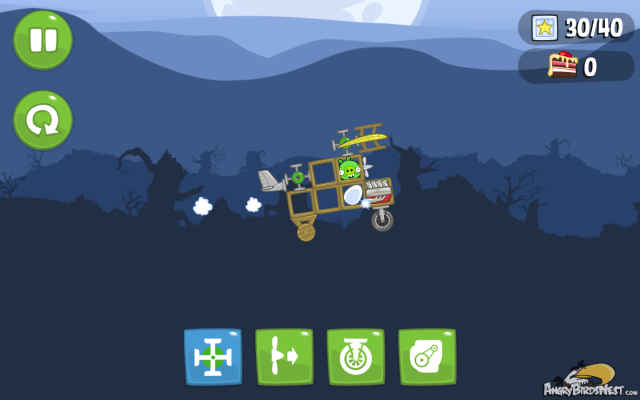 Lightweight, low cost flying car for all your sky-trotting needs!

If you’re thinking this idea by name bears some similarity to the work of Dr. Moller, you’re correct. Moller International has been working on a variety of innovative Flying Cars for many decades, and Moller vehicles tend to integrate their flight components into a compact package. Instead of depending solely on aerodynamic lift, the Moller M400 Skycar uses eight Mazda Rotary engines for vertical thrust. The use of lift engines and stub wings means the Skycar is compact and futuristic in appearance.

In Bad Piggies, it is very easy to construct a compact car-like vehicle that lofts itself into the air on multiple lift fans (or even balloons if you’re on a budget). Use basic aero parts like aeroplane tails to add stability.

But since pigs are lazy and just wanted to eat and sleep we forgot all about “compactness” and just added airplane wings to a box truck! Freedom! 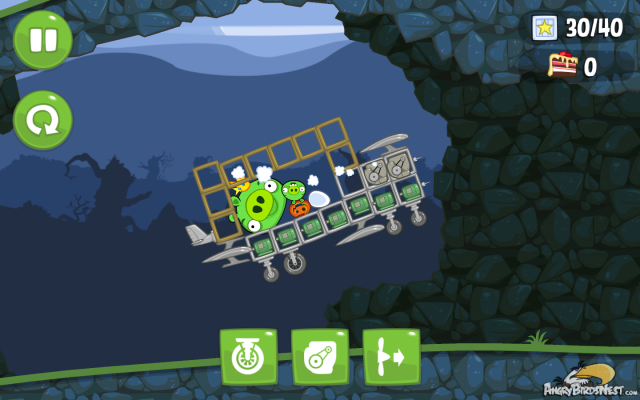 See if you can keep up, U-Haul!

The Flying Saucer may not look like a car at all, but historically small flying saucer designs were indeed termed Flying Cars. I’m not sure who would call a flying saucer a car. Aliens, maybe? Or King Pig having too much to eat and needing anti-gravity drives to bring him back to his mountain retreat? 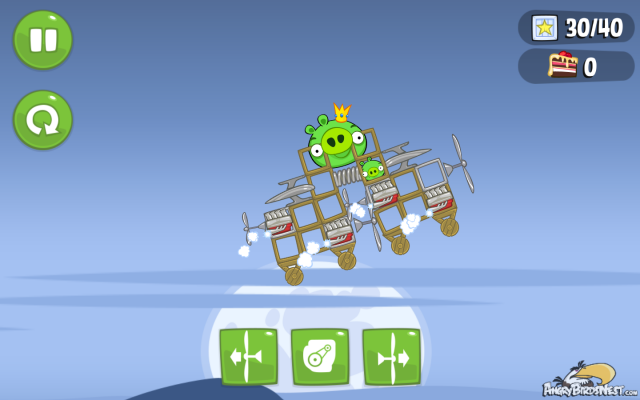 The King Pig is so Fat, we needed UFO technology to loft his incredible pork!

In any case, the US Military’s VZ-9 Avrocar projects and the Moller M200G Volantor are both saucer-type “Flying Cars”. Notice their lift fan propulsion and inherent 25th Century awesomeness!

4) Come up with your own design logic!

Some of you don’t get that I enjoy looking at pictures of historical machines and think up ways and means to pigitize it in to the game (it’s just like digitizing, only pigger!). In that case, you’re also perfectly welcome to redefine the scope and scale of bacon engineering by creating something so truly out of this world that no one shall question your personal pig-infused greatness for all eternity.

Something like this engineless car from some time ago. Look ma, it flies, without engines! Who said we were Big Polluters?

it is so powerfull