Today is the day you see the birds and pigs walk and talk! At 2 minutes and 36 seconds the Angry Birds Movie trailer is longer, and reveals more, than we expected. ‘Nuf said though, click play above. 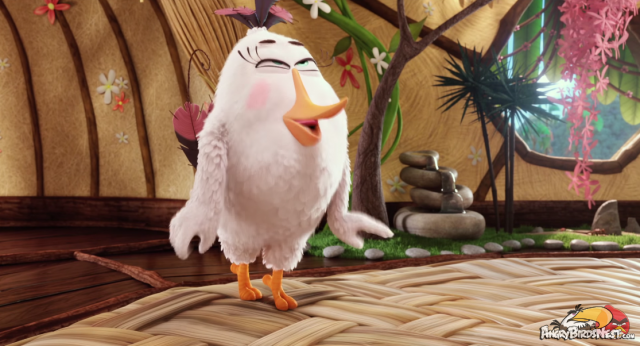 We’re goin’ be workin’ on managing our ANGER through movement.
– Matilda 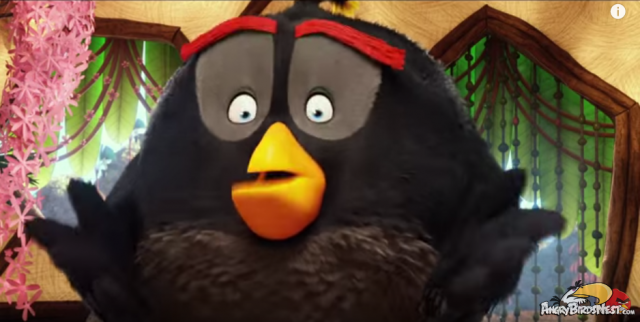 It seems like this movie isn’t going to follow official game canon. For one thing, the island in the opening doesn’t look like Piggy Island. Not too big of a complaint, though.

Hearing the birds and pigs talk was always going to be interesting. Red has a deeper voice than I would have expected from the games, but I think Josh Gad is a perfect match for Chuck’s personality.

Also, has anyone else noticed that the minion pig beside Leonard has freckles?

Finally, I’m wondering if any recognizable pigs will show up in the movie (King Pig, Foreman Pig, Chef Pig, etc.)?

Edit:
Already-confirmed cameo spots: Hal and Stella both appear to be in the surprise party Bomb accidentally blew up.

Also Bubbles appear at the party. I’m interested why they show a lot of birds and only two(!) pigs already. It’s reversed to normal situation.

GASP. Interesting theory appeared! You know how the pigs are so inventive right? What if they created a machine that PERMANENTLY turns things into pigs and they turn the rest of the birds in the islands into pigs, becoming their minions and Leonard becomes King Pig. This would explain why the island is called Piggy island..

This is actually confirmed that this movie is a prequel to the games and is about how the feud between the pigs and the birds started and red chucks and bomb,s epic quest to find the elusive golden eagle(voiced by peter dinklage)

It Looks AWESOME!! And So CUTE!! LOL

Matilda is very sexy with that voice. :)

Yes. I’m not sure if they’re going to actually make her be sexy. Especially towards Bomb.

Looks like a great movie, can’t wait for it to release! :D

Since 0:47 trailer is really funny. Who noticed Bubbles here?

I like Willow’s design but where is she at 1:18? If I’m sure she should somewhere near Policebird.

Best quote is Chuck’s: “Eagle, Parrot, Peacock… Duck!”
If whole movie can be like trailer, it will be great.

Anybody noticed eagle at 0:30 that’s looks like Mighty Eagle??

Wow, it does. It must be him in his younger years.

That’s a statue of the mighty eagle. He’s supposed to be like a legend in the movie or something

love it! awesome it looks.

I totally agree! Looks a lot better than I thought!

Nice to see your reactions!

And yes, don’t worry, there will be more trailers in the future ;)

@wingmanjuan Do we can except more familiar characters in next trailers?

Not even sure what the next trailers are gonna look like :D We’re all gonna have to stay tuned!

…I’ll admit, I was thrown off by some of the early trailers, but now I’m back on the hype bandwagon again.

Also, calling it now: Matilda is going to try to be diplomatic with the pigs, but ends up going berserk near the end.

WOW! I am truly hyped! Well I certainly see many exciting possibilities for this movie, easter eggs, cameos, references etc. Well heres what I notice and speculate for this movie and possible sequels!

First, PIGS! I always had an affection to those fat porcine, and I had been very interested in how this movie will portray them, and to be honest, I am a little bit disappointed that the main villain is not a ‘popular’ pig, like the King or Mustache pig (even though I suspect that the bearded pig in this trailer is related to him, mustache, beard, get it? =P). There is a ship shown briefly, and well, I find the lack of the pig insignia disappointing. I can only spot the insignia as screw heads of the conveyor, but other than that, nowhere else. At least put it at the helm of the ship, but they decided to go with the steampunk design instead, which is fine with me. Also quite impressed with how the minion pig in the trailer really captures the iconic look of the small pigs ingame, even with the addition of the limbs, like the expressions of it.

Another thing I suspect that this is just a movie in a series of movies. As said in above comments, this is a prequel about how the birds become angry, and why they are so insistent in taking it back in the games, which actually makes a lot of sense. Thus, I suspect that there would be a mid/post credits scene which shows maybe an armada of ships led by the infamous king himself! On a side note, how much fatter could the king possibly be? Anyways, I would expect multiple references to the pigs, as the bearded pig is most likely answers to someone of a higher rank. Of course, there is totally a possibility that the King is revealed in this film’s climax instead of the sequels, which is possibly a waste of future content.

Next, the birds! It is interesting to note that the birds had built up quite a solid civilization on ‘Piggy’ Island already, complete with a hilarious Mighty Eagle statue, and it is worth noting that there is completely no reference to eggs at all in the trailer, possibly signifying that the film would focus on how they come about? Also, as the Mighty Eagle is ‘missing’, he might play a role in the climax. Also, Red’s building does resemble an egg slightlyyy, right?

Also, Im really interested to hear the official cinematic theme to this, possibly an epic remix of the original AB theme? I would love to hear that =D But I would hope that this movie’s theme would stay true to the original, unlike AB2, which i could hardly hear any reference to the original theme.

All in all, this is a great teaser trailer, really got me laughing quite hard at some points, cant wait!

At the front of the ship there is the pig snout insignia with those bright green lights in the “nostrils”, it’s pretty hard to miss (just as the ship appears in the water).

Oh yea didnt notice that when watching thats a really nice touch! Thanks!

King Pig could very potentially make an appearance. Perhaps the pigs we see here are diplomats he sends over to gain the birds trust…and then swipe all the eggs on the island when they have their backs turned.

Yea thats what i thought too! Im quite curious as to which design of the king pig they would use though, the more traditional rounded version from the original AB, or the one in AB toons and AB2

Loved every scene in this trailer, but my fav scenes is when Bomb blows up his own house and Freckled Pig smashs his own face into the button, just like in the games.

Can’t wait to watch it.

Let’s hope Stella has a bigger role role along with Red and Chuck as apposed to just a background character.

The movie releasing on May 20 2016, What is the for Malaysia? I hope it’s not around July, cause, I can’t wait

Great Trailer Rovio!!!! Liked the humor with the different birds. Liked Big Brother with the sign and his solution for anger management. The movie looks to be very enjoyable.

Link in ABs app (open a level and hit pause button) for the trailer if link above doesnt work. ;)