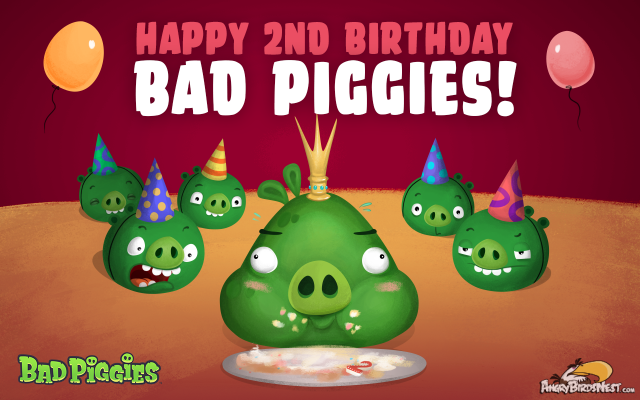 What’s so important about 27th September 2014? You don’t get fireworks, or huge presents or food festivals, but just two short years ago, the King Pig’s Office released a surprise puzzle game that took app stores (iOS / Google Play) around the world by storm!

Never before have the Bad Piggies attempted to break out of cover to make a run for the publishing office to try and get the world’s attention, because they’d inevitably get popped by a hundred million Angry Birds fans!

But try they did, and with perhaps some application of stealth roflcopter technology or maybe just being inspired by ninja movies, they managed to slip through the frontlines undetected to deliver their message of peace, love, and endless demands for food to the world at large.

With this strategy of global bacon outreach, it is ironic that the Pigineering Department (Facebook / Twitter) has kept itself secluded from most of the world and instead work on generating its own identity and produce practical (or silly, or silly and practical like a double-decker couch) machinery under contract from the King Pig’s Office.

Just like iconic small scale British automobile companies which, as Jeremy Clarkson humorously states, “work out of a small shed in Leicestershire“, we do have a bit of a cult following and some very close friends, who from time to time come by and make sure I get a ticket to the Capitol so that I may gorge upon its opulent culinary charms…

In return for the Capitol’s generous contributions to my small outlying District, I have prepared the above small but valuable tribute to the King Pig’s Office, documenting our continued and whole-hearted efforts to try and satisfy the insatiable appetite of His Majesty the King Pig, Royal Fatness of the Bacon Empire and Protector of All Snoutlings, giving him whatever he may desire from the far corners of the world. Along the way, our part-time pizza delivery drivers and unlicensed bacon pilots face many occupational hazards, both from the environment and being permanently cursed with a 100 percent chance of pure Epig Failure!

This video was co-authored with Hank Lewis of HankOnFood.com, a Houston, Texas restaurant review blog.

Speaking of fails, it’s not really our way to point fingers and pass blame, since accidents inevitably do happen in the best of times, and having a forgiving nature is part and parcel of being a civilized piglet. Unlike other animals, we don’t get angry and smash things up when things don’t go our way.

We’ll just hit the replay button and soldier on, keeping calm and drinking tea as we cruise into the sunset, Bad Piggies style!

Should the Bad Piggies ever release an update for this future classic, or create an even better sequel, I’m sure they’ll know we’re ready to aim for the Moon on their behalf. And if we miss, we’ll just end up amongst the stars!

Why is the Moon green!? That’s no Moon, it’s the Fat Pig!

Engineer’s Notes:
Some of the contraptions you see in our YouTube Channel required literally, hundreds upon hundreds of retries before they worked right! You have to be both a master builder and a micromanager to command all the ridiculously complex multi-vehicle setups.

But unlike the Joint Strike Fighter project… we didn’t consume a trillion dollars out of the defence budget :)

Yes!!!!
Yesterday I was playing bad piggies and I was thinking: It’s a looooong time passed from latest Bad Piggies Update.Now I can’t wait for this update.

Sorry about that @hiri! Always a good idea to post my error in B&R ! Fixed now!

What is really interesting is that my icons for AB BP and AB BP Free do not work anymore.

I deleted them and reloaded them and they still do not take me to the games. They just recycle back to the home page of my iPad.

Send Rovio a note for an update on their status.

@wrw01 Same for me. Happened after I updated to iOS8

@bad-piggies-2
That must be it. Same thing happened on my cell phone, could not open both apps.

Sent Rovio another note through their Support function asking them if they are going to update Bad Piggies to iOS8. I guess we will wait and see what they decide to do.

Yeah, letting Rovio Developers deal with compatibility issues is our best bet at the moment. Nothing much communities can do as Bad Piggies is not meant to be a user moddable platform.

“Hacking” of the game did in the past lead to Developers’ cancellation of proposed new parts and updates.

I’ve also done the same @wrw01 – am waiting for a response. It seems that there are quite a few users on ABN & also itunes reviewers who have the same problem. Guess we’ll wait & see

@wrw01: I still don’t know what games you are talking about. i don’t know any Angry Birds Bad Pigs game. The only games I know are Bad Piggies (BP) and Bad Piggies Free (BP Free) without “Angry Birds” in the title, and both of these game don’t work any more under iOS8.

@chriss
You are correct, thank for the clarification on the titles.

Rovio’s response to my note:

Thank you for your message!

We are terribly sorry that Bad Piggies is not working as it should on iOS8! We are currently investigating this problem and we will hopefully get it fixed in no time at all. We apologize for the inconvenience.

You can imagine by now there should be tens of thousands of suppork (support) tickets opened on the issue! Let’s let the developers do their job and pig out on other things in the meantime :3

Very nice video, and happy birthday to the piggies! :)

It deserves a sequel and an update for daring to be different from the usual Angry Birds titles!

happy birthday bad piggies. no update since long long time. starting to forget about the game.

At this point of time I’d be looking forward to a new pig game altogether. Let’s keep our hopes up :)

I hope they update it soon. Maybe they can add a new sandbox that’s in space and your inventions float around.

cool idea @james1562! I was thinking that they could add more Moustache Pig or Helmet pig

I have been pushing for a Space themed update for some time. But last discussions with the @maker states the pig development team has been assigned to work on a “New Pig Game”. I presume Rovio will pleasantly surprise us down the road, although it is not possible to guess which title it is as the moment.

ABEpic and Transformers do have playable pig characters…