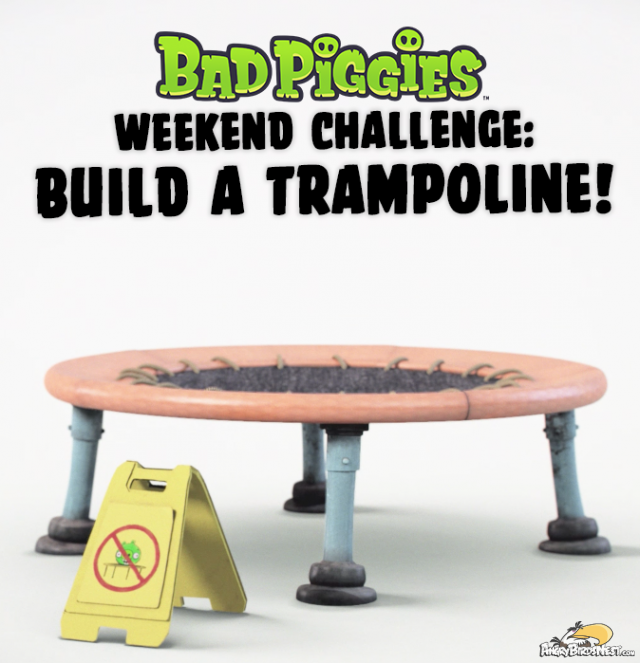 Yeah, they told us to build a trampoline. We took… creative liberties to explain why one was needed!

The King Pig has put on so much weight this year that no amount of Photoshop and mechanized workouts can mask the obvious fact that he is losing the Battle of the Bulge!

In secret, the King’s advisors devised a rather interesting if not outright hilarious weight loss plan for the “Royal Fatness”, modelled on none other than hard-sell tactics typical in certain wellness related businesses that a number of well-to-do humans often frequent.

By giving King Pig a coupon for a FREE trial of a new weight loss solution to try out, he will walk right into the waiting trap, be unable to opt out of the package, and become a new fitter, less lazy, and overall more attractive government figurehead!

Or so we hope. Will the below-shown weight loss “strategy” be efficient for the ever-lazy King Pig? Let us know below!

The next angry birds friends tournament is Pigmania!

Watch: http://youtu.be/GCsQb_n5l8A
There are 3 Trampolines in this video. First one is an old Trampoline, King Pig is over it and works by power of engines, without any moving. Second one is a Mobile Trampoline, same normal Trampoline with 4 wheels in bottom, 2 wings in right and left and one boxing box in top left for moving King Pig to main of Trampoline. Third one is very advanced, it’s called UFJO the Unidentified Flying and Jumping Object, just watch it in the video!
No Power-Ups!
Example of old Trampoline from:
http://thinkoutsidethebin.com/2011/06/09/recycle-your-old-trampoline
More Recycled Trampolines:
http://pinterest.com/explore/recycled-trampoline

A larger build space would have been great for these designs! The first one took up nearly the whole screen already. :)

Sigh. I have so many ideas that were too grandiose for the build space, or needed more of an object than the game provides.

love the trampolines you showed in the videos. Pure genius :)

How does one spell trampoline…punching bag!!!!

At times weight low can be painful but that machine provides an entirely whole new meaning to pain.

Hope I’m not too late: http://youtu.be/2J_pzHpSAtI

I think I must’ve been reading @mpg973‘s mind when I made mine. It’s similar, but has fewer snazzy features. And, as the title states, this model was recently recalled for safety reasons. Apparently, the piggies have never heard of a product liability lawsuit.

As the old saying goes: It’s always fun til someone gets hurt, then it’s hilarious

edit:I actually got king pig to do a double backflip on this thing, but recording was off (of course).

You know the other time (well actually, several times) I was infantile enough to build toilet bowls for the King Pig? What if we made one into a trampoline? Hehehehee!!!!!

The immediate epig failure potential of yours is hilarious – and then the arrangement of the punching gloves in a bowl does create an uncanny self-centering ability for the King Pig to safely bounce around in! If his bouncy antics go overboard then warning pyrotechnics will go off and wake the nanny up from her afternoon nap. Who needs wifi cameras for home monitoring?

Now, we just need to build a rectangular water tank and connect it to the bowl and King Pig will be none the wiser as to its true function. We can file the RnD expenditures under King Pig’s recreational budget, which is like 360 trillion snoutlings / yr anyway. No one would notice… :D

I don’t remember playing on the Trampoline being so rough ~ this one has to hurt!