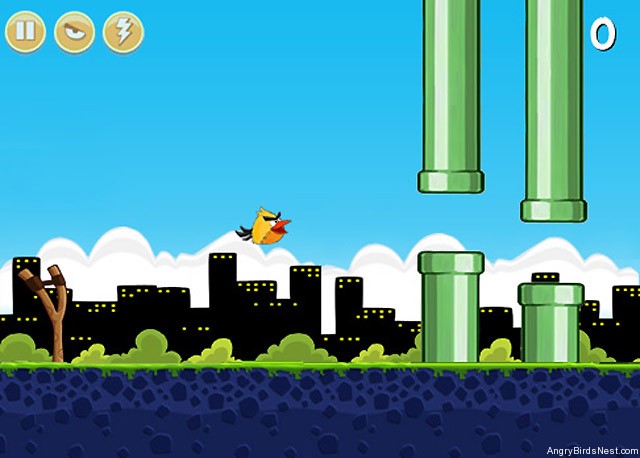 This just in! Rovio just announced that they have purchased the rights to the frustratingly hard — yet uber popular — game “Flappy Bird” from creator Dong Nguyen and publisher .GEARS Studios. The game will be re-branded as a spin-off of the popular Angry Birds series, with the title character getting an Angry Birds make-over to better fit the look of his fellow avians.

Nguyen recently stated he would be re-releasing Flappy Birds, but few could have foreseen its return this way. Details are scarce, but we have obtained some early screenshots of the updated game. It looks like it will use the standard slingshot device to start Flappy on his path. IAP Power-ups look to be added as well.

Perhaps you don’t know what today is?

I know. I didn’t fall for it until I saw the link for the ‘official’ press release. Of course, you’ll never guess what popped up on the screen.

You have got to be kidding me!?

This better be an April Fools Joke, with so many games like Flappy Bird, I don’t even wanna talk about it. >.<

Take closer look on Bold letters… and today is April.

Yeah I don’t believe that. That is so an April Fool’s joke.

If you get easily fooled, get off the internet. cuz this is going to be a long day

I was excited, but then my sister told me about tumblr pro, so now I know it’s just a joke.

And now I clicked the link :(. But using the atlas png I have created something just like the image a above, with the toons birds (seems like rovio is going for that now, like in rio) and the regular ab backgrounds, angry birds text, three stars (instead of three medals, and in different spots) and a working slingshot using the atlas.txt

Do you have a link to the pic?

Hehe, now does that Mighty Eagle Logo at the pic look suspicious or what?

HM well, it would be awesome if a Angry-Tiny-Flappy-Winged-Bird would be real.

Yep. No joke. look on their Twitter. It’s official. An Angry Birds simulator. ‘2d Gameplay in a 3D World’ (your avatar looked hilarious when you said ‘really?’. It looked like the pig said it.

The image is NOT HD and you think i will belive that THIS is true without removing the freakin’ Mighty Eagle button!? :I

Flappy himself looks like a crayon and marker drawing. And what will power ups do, anyways- WAIT! I HAVE AN IDEA!! How about invisibility (pass through pipes), speed reducer (slows down time), and reviver (gives another Flappy Bird). What would the Mighty Eagle do, though?

is is gonna be easy with the mighty eagle!

Can’t pass a hard pipe? Summon the Mighty Eagle! It will demonish the whole game! LOL

I was actually EXCITED for a moment… Darn you, ABN!

I got excited too. Now I have egg on my face!

I (for some reason) wasn’t. I’m wondering about the re-release, though.

I can’t believe I fell for it…

Ah-hah! Gotcha @blahalb09! But, doesn’t those green pipes remind you of another video game? LOL

i have to say, ABN does some of the best April Fools stuff

I fell for it too

Nice April Fools joke BL. Did not see the link immediately but eventually click on it. Good fun!

That was good. Had me for a minute…

Haha, thanks @sparty83, but this was all @dr-omega‘s idea. He deserves a pat on the back for this one.

Well maybe its stupid to ask but what’s Touché?

@abhinav123, “Touche” is used to admit (or agree) that someone has made a clever or effective point in an argument. It’s also an acknowledgment that a scoring hit has been made in a fencing competition.

I was expecting some April fools trick but did not see this coming :)

Kudos @dr-omega! You had a lot of us falling for that trick! Heehee.

I just have one thing to say:

April Fools is not funny.

April fools is talking about a joke

Angry birds don’t have wings. So how can they flap ?

This should be real.