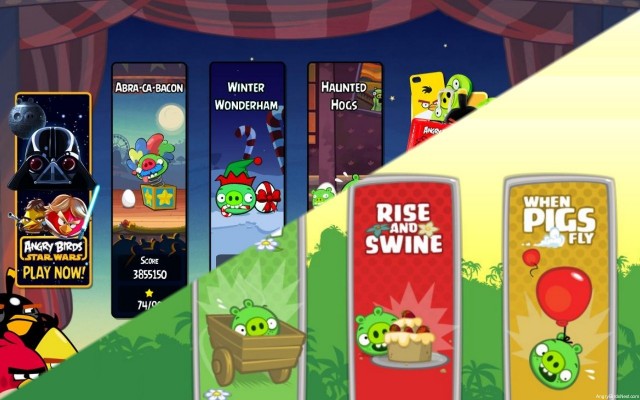 At long last, updates for PC seem to be rolling out. According to Rovio, they experienced some serious technical difficulties with their PC apps and have worked tirelessly to repair them. Today, we saw the first few updates roll out. (And no, we do not know when other updates will land for PC.)

First thing this morning, Bad Piggies was updated to include the first 15 levels of Rise and Swine. For more information about what’s included in this release, see our original post.

To grab this update, simply open your Bad Piggies app on your PC. You should be prompted that a new version is available. If not, try cloud.rovio.com/install/pc/download/BadPiggies/.

A short while later, Angry Birds Seasons was updated to v3.3.0, featuring the portal-filled episode Abra-Ca-Bacon. The episode has 30 normal levels, 3 bonus levels for PC, a hidden Golden Egg, and a Big Juggling Pins level for 3-starring all levels. For a much more detailed look, see the release post.

Unfortunately, Rovio revamped its shop and, in doing so, you will not likely be prompted to download the new version in-game. Instead, head to download.angrybirds.com and click on “Download Free Demo” under Seasons. Run the executable to install the new version. All of your previous progress should be there, but be sure to backup your data just to be safe.

If you are getting errors when trying to install or run the app, go to download.angrybirds.com and download the demo, as we say above. When you run the the app, you will be prompted that an update is available.

It is actually a downgrade, and potentially to a buggy version. Your best bet is to ignore the prompt (sure, it’s annoying, but it’s better than having a broken game). For more information, we have a forum thread about this issue.

A much much needed update. Btw, if Rovio shop was renewed, then how others gonna buy the app?

@Lamia You can still easily purchase via Rovio’s shop. They removed the “Download Demo” option from the shop and, instead, send the Demo link to your email when you purchase an activation key.

If you already have the game, you should be prompted when you open the app.

If you don’t have the game, you will receive a link when you purchase an activation key.

Or, if you know a little bit about URLs, it’s pretty easy to get the right link from download.angrybirds.com ;)

Thank you! I changed the last word in the download link for angry birds so it said BadPiggies and it worked!

Or you can use this Official Link with all Demo;s on a row:
http://shop.angrybirds.com/us/pc-installation-guide

good to see the long-awaited update has landed on PC at last!

Finally we got this update on PC, YAY! And the big mooncake is working now, so they got it fixed :D I also noticed that in this update they’ve changed the name of the episode. It used to be Mooncake festival, but after the update it’s now Moon festival :)

Maybe I missed this somewhere.. but I typically don’t play with sound on the Android, but PC I do. When did they take out the secondary sounds of the birds when you click after you release them? I noticed that on this update, since haven’t played PC in a while.

Yes this is true

I miss them so much

Angry Birds Seasons Abra-ca-bacon update can download on my PC, but it has a error every time it completes downloading.Do you have a solution Alslimfordy?

Thanks for the instructions but it is no use installing the update using the setup file downloaded officially. Rovio better release an update – maybe v3.3.1 – and fix the problem asap.

@ksfno1 What problem? That you are prompted to download an update? That’s a minor issue compared to not being able to play the game!

Yeah, it is minor but frustrating. The only way to get rid of it is to remove updater.exe and updater.ini files completely, I think.