Here at the Pork Gear Technology Centre (It’s just like Top Gear, only pigger – says me), we remain at the cutting edge of bacon transport technology thanks to our relentless pursuit of perfection in the arts of “epig failure“. If you’re not too distracted by the aroma of pig on the grill, try to figure out how many automotive references there are in this piglet-sized paragraph!

Recently, the topic of road trips came up in the Pigineering Crews and like the Bad Piggy I am, I wondered what would happen if you went on a 12 hour road trip and then a tyre blew. As luck would have it, this is one of them complacently-engineered (not by us) vehicles with no spare tyre and just a can of Fix-A-Flat in the trunk… that obviously doesn’t work on a rubber donut that decided “tire tread delamination” or “explosive sidewall failure” was an appropriate way of giving notice of immediate resignation. How rude. Tires these days are just like the piggies. Bad.

So you have a piggy car with a failed wheel in the middle of nowhere, Angry Birds closing in and setting up slingshots and you have NO SPARE TIRE. What do you do? Panic and run around screaming? No way, that’s not the Pigineering way! You have to become a Creative Piglet and re-invent the wheel! 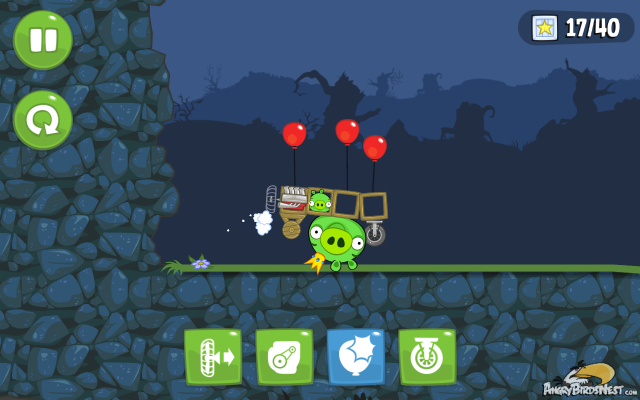 What’s the speed rating for this huge green tire?

Who needs spare tyres if you can do away with some of the wheels completely in a car-sized rendition of Chris P. Bacon – Pig on Wheels? Better yet, make use of that very large, fat and round King Pig as a wheel, and while you’re at it, use the lazy Royal Fatness as a form of engine! 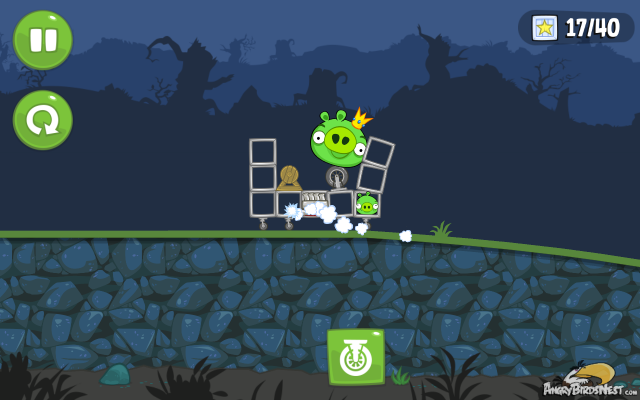 How can King Pig become an engine? How much Porque and Pigpower does he produce at 10 oinks per minute? Watch the video below!

It’s all completely plausible and realistic so don’t sic the Mythbusters (or Angry Birds) on us, for we have the video evidence right here!

this system works with a glitch, yo can see that te wheel is touching something, and it is like one machine in contact with the roof

The PIGineers bounce back after the Swing “fail” by Reinventing the Wheel ~ Yea!