Angry Birds Transformers celebrates Halloween with a creepy new update (Version 1.8.9): Adding a brand new “Iconic Transformer” Nemesis Prime, and a Halloween Tournament! Out now on iOS and Android a few days ago.

*** INCOMING TRANSMISSION FROM TELETRAAN 1 ***
HALLOWEEN PUMPKIN INVASION! Piggy Island has been overrun with spooky pumpkins and ghosts. Compete with other users to smash pumpkins as you play and earn prizes for Halloween!
SPOOKY NEW CHARACTER! The terrifying Nemesis Prime has emerged from the shadows just in time for Halloween and comes with a range of new accessories for you to play with.
——— TRANSMISSION TERMINATED ———

Included in this Update 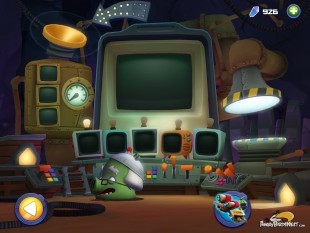 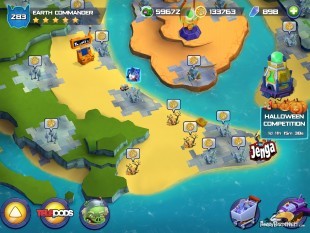 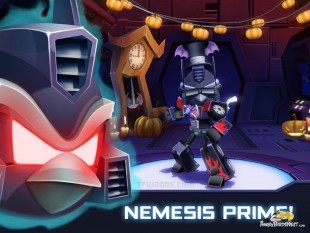 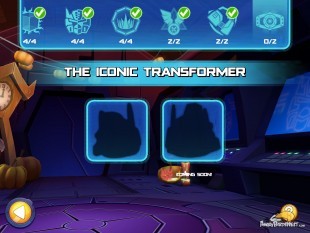 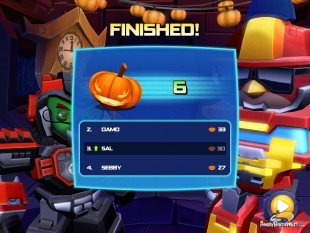 I need some more information on Nemesis Prime before I spend any money on him.

Can you only play the tournament screen one time? That’s what it looks like so far.

I had a few “Connection Error” messages despite being connected.

@dmsral his ability is really weak- he just make pigs jump up…that’s all (I don’t wanna pay 12 bucks for someone who makes pigs bounce- FREAKIN BLUESTREAK is better than him >:/ )

He is not weak actually, I have him level 15 now and his weapon is much like Soundwave’s. It can destroy entire towers in one shot en if you aim at pigs you kill them as well. Like soundwave he is very ineffective against mortar towers though. Amd his armor is much like normal optimus prime, I think it was worth it to buy him.

Not paying for Nemesis!!!

@sal9 You can also now use gems to change the character of a node (tap a node and click the purple button with the round arrows). For example, use gems until you get Goldbite Grimlock or any other variant character for a Golden Egg Dome.

Downloaded the game, purchased and upgraded NP and played a few levels but stopped because the Boost Your Buddies videos do not work in the Facebook mode. Cannot play the nodes because of what else maybe malfunctioning. The Forums have also documented a number of other bugs and glitches.
Now I only collect coins, runs Missions and play in the Professors Lab. Love this game and can only hope it gets fixed correctly in the near future.

Lol yea I’m not payin $12 to get nemesis prime

I like the new update,have been playing a lot of this game recently and figured they’d earned a bit if my actual money so happily paid for the new character. The pumpkin tournament looks like good fun.

I was a bit miffed though, got around 500 pumpkins and was at the top of the leaderboard (as it was shown to me) thought I was on to win 200 gems but the tournament just ended and I got 10,000 coins instead.

If that is a bug I hope they iron it out soonas it would frustrate a lot of players and stop them being as keen to participate in the tournaments.

Wish you could go back and see the final standings…

Yes that would be helpful. or if it showed me what others had – on my phone it showed 2nd and 3rd as having about 200.

Well done on your win.

Updated on my iPhone 6 and paid for Nemesis Prime now I can not play the game at all as the NODES DO NOT WORK. YOU CAN NOT PICK A TEAM MATE TO PLAY MISSIONS. Only Jenga mode works. This is the 2nd time the update messed up my game. DO NOT UPDATE OR PURCHASE. I WANT A REFUND!

Won both pumpkin tournaments, about to wrap up a third.
Is there no competition out there? C’mon peoples!!

I’m having the same problem as dean g. Really tired of this game fouling up on my iPad with every update. I didn’t have any bugs. Thanks for hosing up the game.

I came in 2nd, but had my 125 crystals wiped out by a random re-start – why is this game so buggy?

I just finished my second pumpkin tournament and got cheated again. This time I was 108 pigs in front of 4th place with a minute to go and all I won was 10,000 coins. When will this game stop cheating us out of what we work really hard for? I lost over 250,000 coins the other day. It does transfer well between devices. I have it on my phone and iPad and logged in on both. Anything I gain on my phone is not saved other than the levels being completed and the coins starting over.

Is there any way to get Nemisis prime with out buying him? Can u get him VIA tournament?