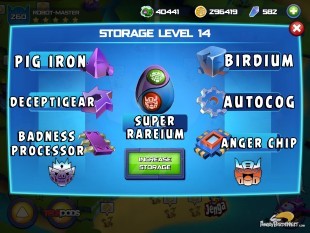 Store Materials in the Silo 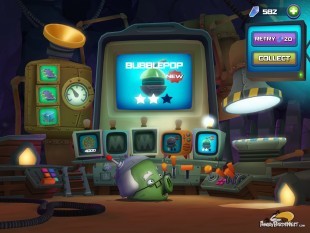 There’s a total of 48 Energonicons (E-cons): 20 of them are 1-star, 20 are 2-star, 4 are 3-star and 4 are 4-Star (Rarity). To craft Energicons enter Professor Pig’s lab and feed his slot machine any 3 materials. To craft a specific E-con you need the recipe, which we’ve listed below. Note, some E-cons have multiple recipes, but not all.

Spinning Professor Pig’s slot machine crafts 5 different “items” which are shown on the 5 little screens. The rewards of each spin can include Coins, Gems, Materials or Energonicons. The main screen will display the item you will receive. @avip2u created an amazing forum topic that details a lot of the recipes (most are included below as well).

Crafting Energonicons (and upgrading your Transformers) requires materials, which can be obtained via gameplay (slow), through Mission Portals (faster), and by watching video ads (slow). As you collect materials they are stored in your Silo. Tip! Upgrade your Silo to store more materials. As you progress this is extremely helpful as some upgrades require a lot of materials.

Material Guide (screenshot above on left)

A BIG “thanks” to @avip2u and @mighty-red-1! Without them this guide would not have been possible without. As always, if anyone here has more info, additional cratfing recipes, or thoughts please share them in the comments below.

Returns Damage to the Sender

Continue to Part 2 of our guide.

Great article!
I was wondering how to get these!

@avip2u @mighty-red-1
Outstanding guide!. A lot of hard work, energy and time to make this for the benefit of all us Nester who play ABT. Thank you both for making this. This is a great benefit and time saver.

Thanks @birdleader for the posting.

Anyone have an opinion as to how to increase the stars for each? I suspect we will have to wait for the next ABT update but I hope that someone may have an answer.

@wrw01 You can’t change the star ratings of the E-cons. The stars just categorize the E-cons based on their usefulness.

Thanks @mighty-red-1 for the update.

when will agri birds come out?

First, you are commenting on an irrelevant article.
Second, Agri Birds was just an April Fools’ joke.

Rank: Flinger with 0 points
By Poptimus (@)

Any plans to post a comprehensive list of recipe combinations, with all five results for each, both before and after the e-cons have been collected?

@poptimus We have no immediate plans for that.

The Bubblepop’s recipe is error. The right recipe is 2xBP, 1xBI, please fix it.

Adam, the recipes should be the same for all. I just crafted a Goldslam with 1BP + 1SR + 1AC

You’re right, I made a mistake, my bad. Thanks

how can we see what Energonicons we got without going through a level?
I check what I have usually by starting a level and having to chose one of them?
Is there another way to do it?
cc @sal9

Instead of choosing the Econ when you start, click on the magnifying glass in the lower left corner. This will show you all of your currently obtained Econ’s. You can also just swipe R-L on the row of Econ’s showing. Just tap outside the box if you don’t want to keep going through a level..

Hi, found a new recipe for Powerbot its 2DG + 1AC.

The healthbot recipe is listed as one bp + two ac, it gave me the confuddlebot not the healthbot.

OMG,I’m so very excited about this. I have crafted all but ONE of these. Trust me I’ve been trying for months to figure out what energons I needed or the order. Wasted countless eggs, crystals and inventory hoping. So without even looking at the info. I’m super stoked. 100% transfantastic!!!!!

i need have more lucky

@sal9 prior to the new in-game update, 4 star (legendary) Energonicons, such as Piggy Blast, have been reduced to 1 out of 3 regular stars- probably to prevent it from looking overpowered (when it isn’t)

How to craft Boomshake?
The recipe doesn’t seem to work!

Why can’t the totals be doubled anymore?

Is the recipe correct for glass or.

I gave tried this a dozen times and see coins and crystals.

This entire article is now irrelevant due to a recent update. Sorry man, a lot of work went into this.