Angry Birds Star Wars is due for another update! According to the Sandbox mode of GameCenter, there are two new leaderboards and one new achievement in this forthcoming update.

Details are limited, but here’s what we think:

Special thanks to @bassam77 for tipping us off, and for providing some of the images below. 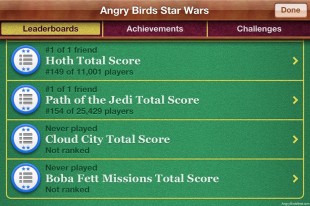 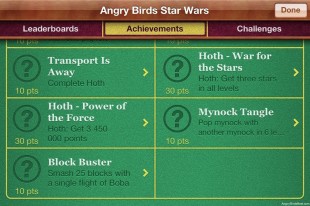 a) What is QA (as mentioned in the post)?

b) How is the GC Sandbox mode accessed?

(1) Quality Assurance
(2) It is “developer mode” and only available to app developers with GC integration.

According to Rovio on Google+, the update is coming out this Monday!

That sounds like a gameplay video will be released on Monday

Oh, okay. I guess they could mean that. Thanks guys!

Yes, a gameplay trailor is going to be released on Monday.

Love the Han in Carbonite touch!! Next chapter will have Leia in chains…Not sure how I feel about that…Hrmmm.

I wondered what will looks like when Leia in chains (cause birds hands are invisible :P)

It could be around her neck? That was the one she used to *SPOILERS* choke Jaba after R2-D2 took it off.

How did you know that the update is coming next week? i only see an message from rocio with gameplay on monday??

GDC is next week. Rovio always releases an update during GDC.

maybe a stupid question but what is GDC?

Off topic: did AB released on bada devices? I saw the rumor on xda-developers but it’s already old (2 years ago)

I believe it WAS released for Bada, but I don’t have any specific references. Sorry @theog

No need to sorry @amslimfordy , I just wondered if that rumor was true :)

there is a gameplay trailer on mtv on http://www.mtv.co.uk/gaming/angry-birds/video/angry-birds-star-wars-cloud-city-exclusive

@Mighty , thanks for the link.

boba fett is an challenging pig?

Wow! How fun does that look!!! Another reason that this has become my favorite AB game. Thanks for the link @Mighty :)

just watched the gameplay trailer and am now really looking forward to Cloud City! Those jets look interesting and immensely irritating at the same time. I may have to buy a second iPod, I can see some snapped devices in my future…

I can’t really get a handle on how Fett appears in the game from the trailer. I assume he’s a boss of some sort, as he’s a villain, but actively derailing him looks like it’ll be fun :)

maybe, once you finish a level(in cloud city probably), a boba fett icon will appear, if you press it, it will take you back to that previous level and will add Boba to the level and you try to kill him and the pigs. maybe to make the level harder, or it acts kind of like the millennium falcon.

Do we know yet, the Boba Fett missions will be a purchasable extension or not?

I sure hope not! If it is, I at least hope there’s another way to unlock it without purchasing it, like in Path of the Jedi.

I do hope not. I liked the Jedi method too: do well enough in the game and it’ll be available for you, or if you can’t wait to play it you can pay to unlock it :)

Looks like 20 levels available with 2 pages of “coming soon”, and 5 Boba Fett missions (all unlockables).

Looking forward to unlocking these :)

Cool special episode. I bought it, but I think it is very fair from Rovio that players have an option to get those levels by finding and getting helmets. I don’t know where helmets are, only in CC or somewhere else in game too and I hope that Sal and Slim will manage to find them all and make videos soon.

Update for android is out

So it appears that Boba Fett Missions is simply a collection of bonus levels with Boba Fett in them.

Great update and Rovio teased us with Lando but he hasn’t appeared.