The pigs at Piggywood Studios have released another batch of films to the world in a bundle of all-new levels. Will Piggywood Studios become the new Hollywood after this? The update is out now for iOS and Android.

Get ready for Piggywood Studios: Part 2 – this time, it’s personal. Or something like that. The pigs are back with a new batch of low budget takes on high budget film classics. 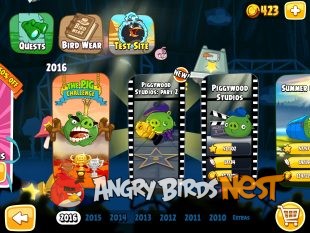 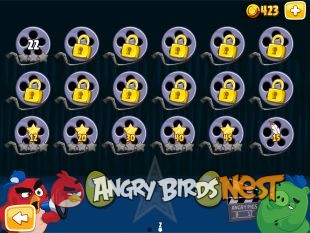 It’s there. Did you refresh? Who’s your wireless carrier?

Yep, refreshed the heck out of it. Carrier is Xfinity.

Oh my Lord….the update on the iPad is not the HD version. My HD is still crashing. I went directly to the App Store and opened it from there. Back to the drawing board Rovio!!
I give up.

Wow! This is a REAL bummer! There is still no update for the HD for my iPad Air! Ya know…it’s especially upsetting as I live in Florida and we are about to get hit with a Category 4 Hurricane in the next 24 to 48 hours!!! I was really looking forward to having this update to play, hahaha ;(

lol I’m gulf coast Texas. We’ve been spared since Ike. They seem to be enjoying the Florida beaches and east coast this season, as well they should. You have white sand and clear water. We have seaweed and tar balls hahahaaa.

HaHaHaHa @welshwitch55 :-) Too Funny…I guess they do prefer the white sand beaches over the “tar balls” ;D I think this is going to be the biggest and closest one we’ve had in quite some time, Yikes! Oh well…the Update is up and running, Yippee!!! 8-) Just in time…now we just need to finish putting up all the stuff outside that could be potential missiles! All the stores are out of water and gas…good thing I got mine yesterday ;)

Constant crashing since part 2 Piggywood update…. What is being done about this???

Got my update and all is well with the world! Thank’s again birdleader for making the call!!!

Since Game Center has disappeared in iOS 10, where can I see my achievements now?