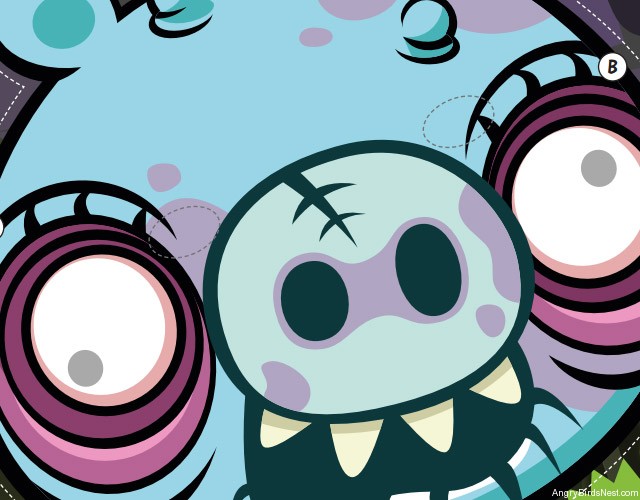 It’s October, and that can only mean one thing: Happy Anniversary to “Angry Birds: Seasons” … oh, and Halloween!!! To celebrate the occasion we’re compiling some awesome and creative Angry Birds Halloween related activities for you and your family. We’ve got everything from pumpkin carving templates to costume ideas.

A quick history lesson (skip if easily bored). Those fans who have been around for awhile will remember that Angry Birds Seasons started under the name, “Angry Birds: Halloween“, way back on October, 20th 2010. It was an amazing version of Angry Birds that many still consider the best ever. Once this spooky version began to rival the original in terms of popularity, and with Christmas around the corner, Rovio revamped the app to become “Angry Birds Seasons“. A brilliant move by all accounts. To date there have been thirteen episodes in Angry Birds Seasons.

Moving on to the fun stuff. Jump to:

Helpful Angry Birds pumpkin carving video that shows you how it’s done. The full written tutorial can be found here.

Now, for something I have enjoyed since I was 5 months old — pumpkin carving! My family has grown, carved, and painted pumpkins every October since I was born. It’s a great tradition, something fun for the whole family, and they look nice for the Trick-or-Treaters. We’ve compiled quite a few templates below.

Easier for Kids and Families

AlphaMom has quite a few templates, including the red, blue and white birds and an evil piggy. Also included are some cool tips and add-ons, such as feather caps for your pumpkins, re-inserting the beak during the daytime, and some cutouts for miniature pumpkins. These templates are rather simple and straightforward (5/10), so they would be fantastic to work on with younger children.

Another site, Celebrating-Halloween.com has a great collection of simple stencils. They require no shading, which is rather difficult to get the hang of. The Red Bird and Yellow Bird are remarkably basic (a 2.5/10), so older kids can probably do these on their own (with adult supervision, of course). On the other hand, the Pig stencil is a little more involved (a 4/10), but will easily “WOW” anyone who comes to your door.

Harder to Advanced for Die-hard Carvers and Fans

Fantasy Pumpkins has the most complicated stencils I’ve seen. They are very specific, incredibly detailed, and involve loads of shading. I give these a 9/10 for difficulty, but if you have a few carvings under your belt, it may be worthwhile to give them a try. At the very least, the Black Bird stencil is probably the simplest and most awesome, IMO. (The color contrast makes it a very approachable carve with far less shading.)

If carving isn’t your thing, or you want your pumpkin to last a bit longer, you can always paint it! NothingButCountry.com has a great article titled, “Dollar Store Pumpkins – Angry Bird Style”. It’s got loads of pictures of what would be a great craft for the whole family!

If you end up carving or painting a pumpkin we would love to see the end result. Happy Halloween, from all of us at AngryBirdsNest.com!

A couple very quick notes on these templates. First, while the thumbnails may look distorted, clicking on your desired template will reroute you to the original document with proper proportions. Also, shading is a very difficult art. It involves skinning the top layer or two off of the pumpkin so that light shines through, but not so much as to actually puncture the inner membrane of the pumpkin. You may want to try this first on areas that are supposed to be cut out — so any errors can be “erased”. 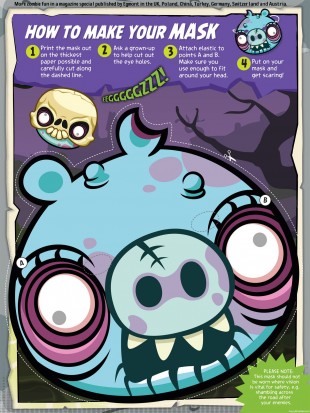 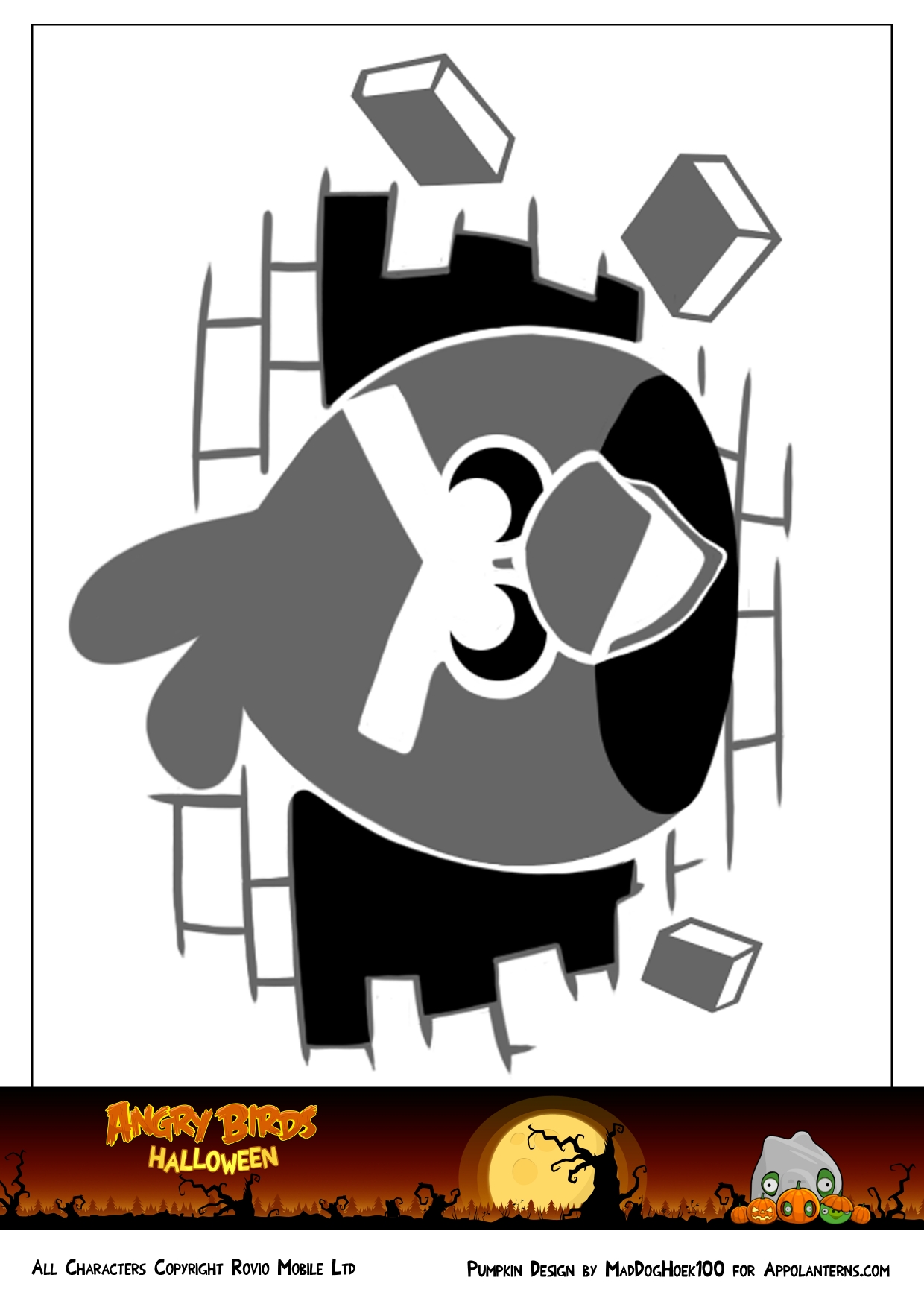 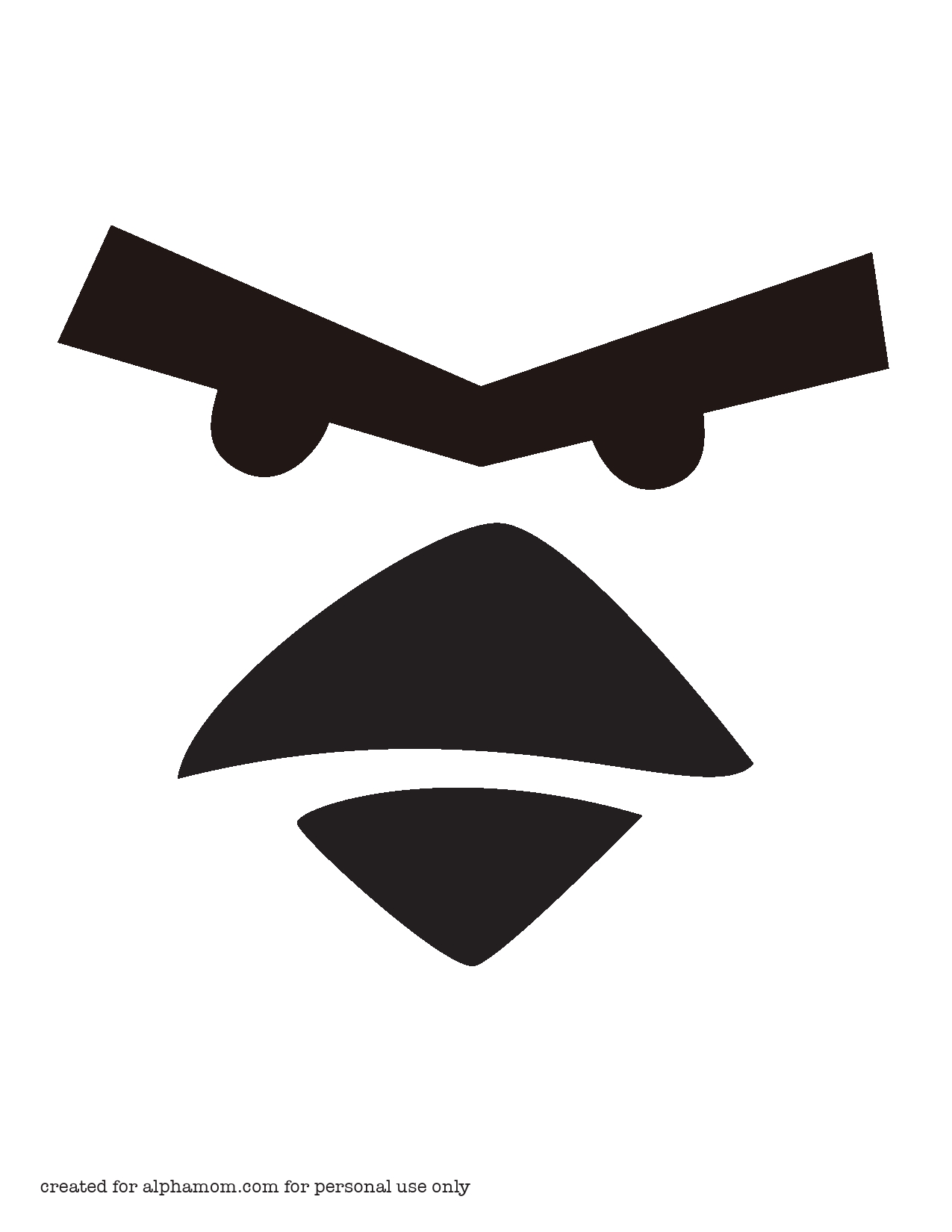 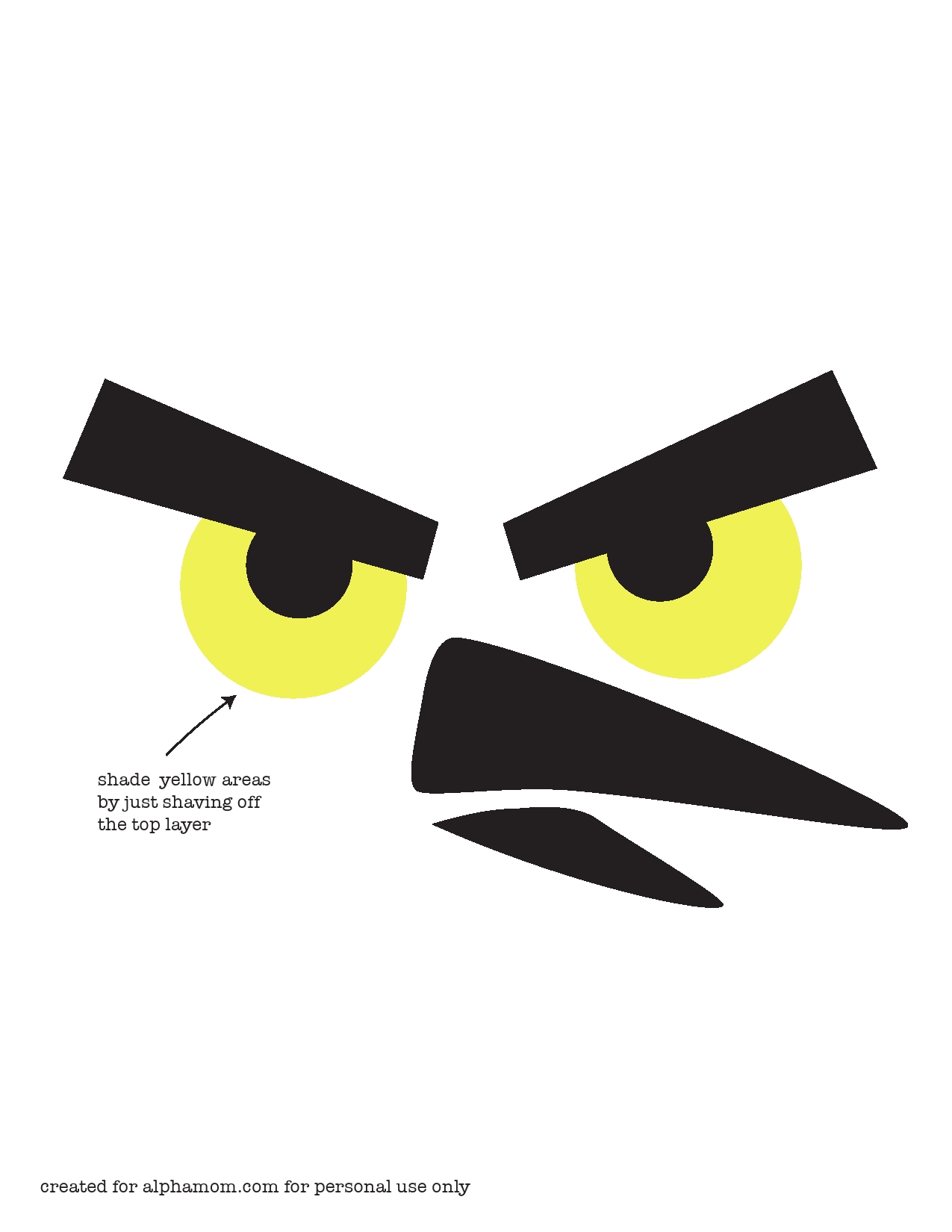 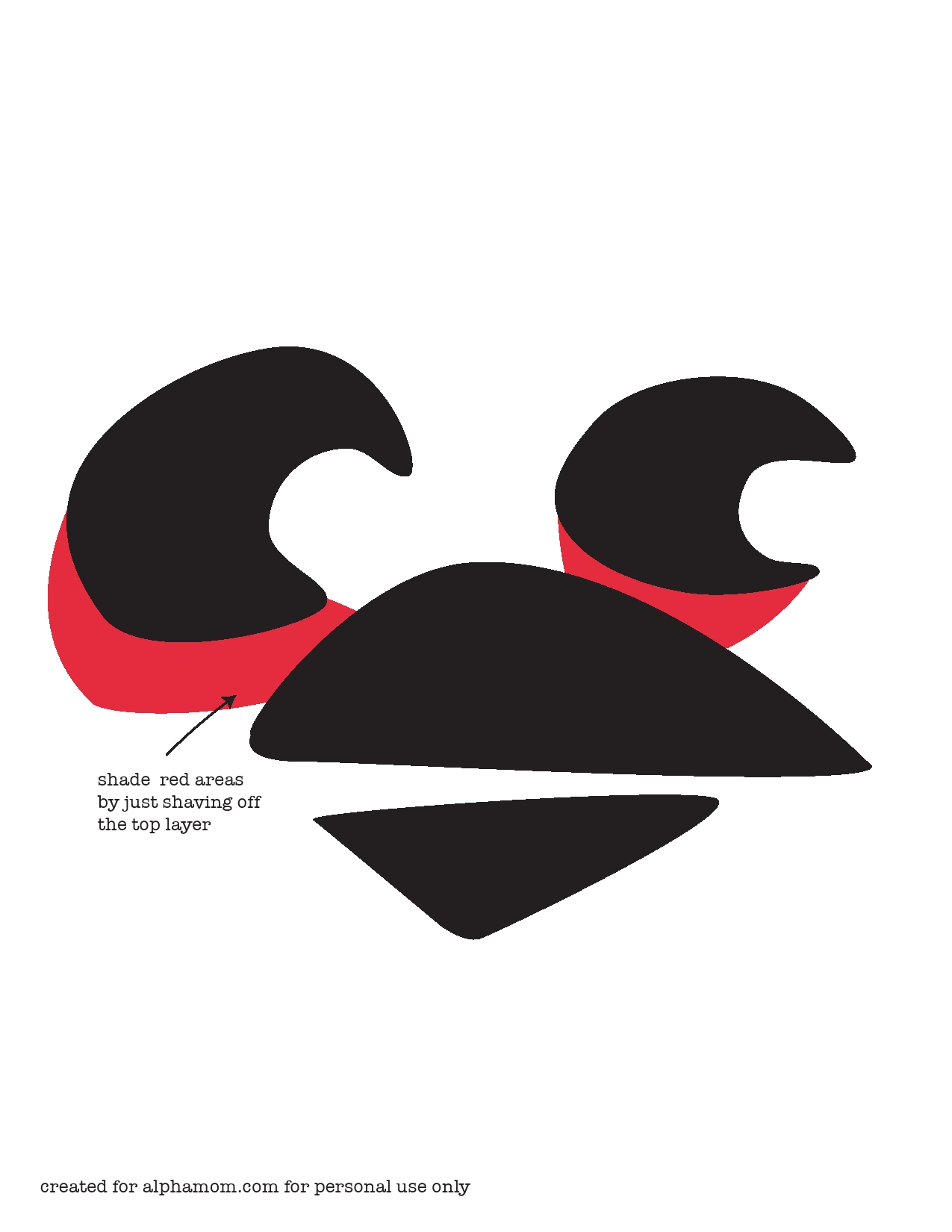 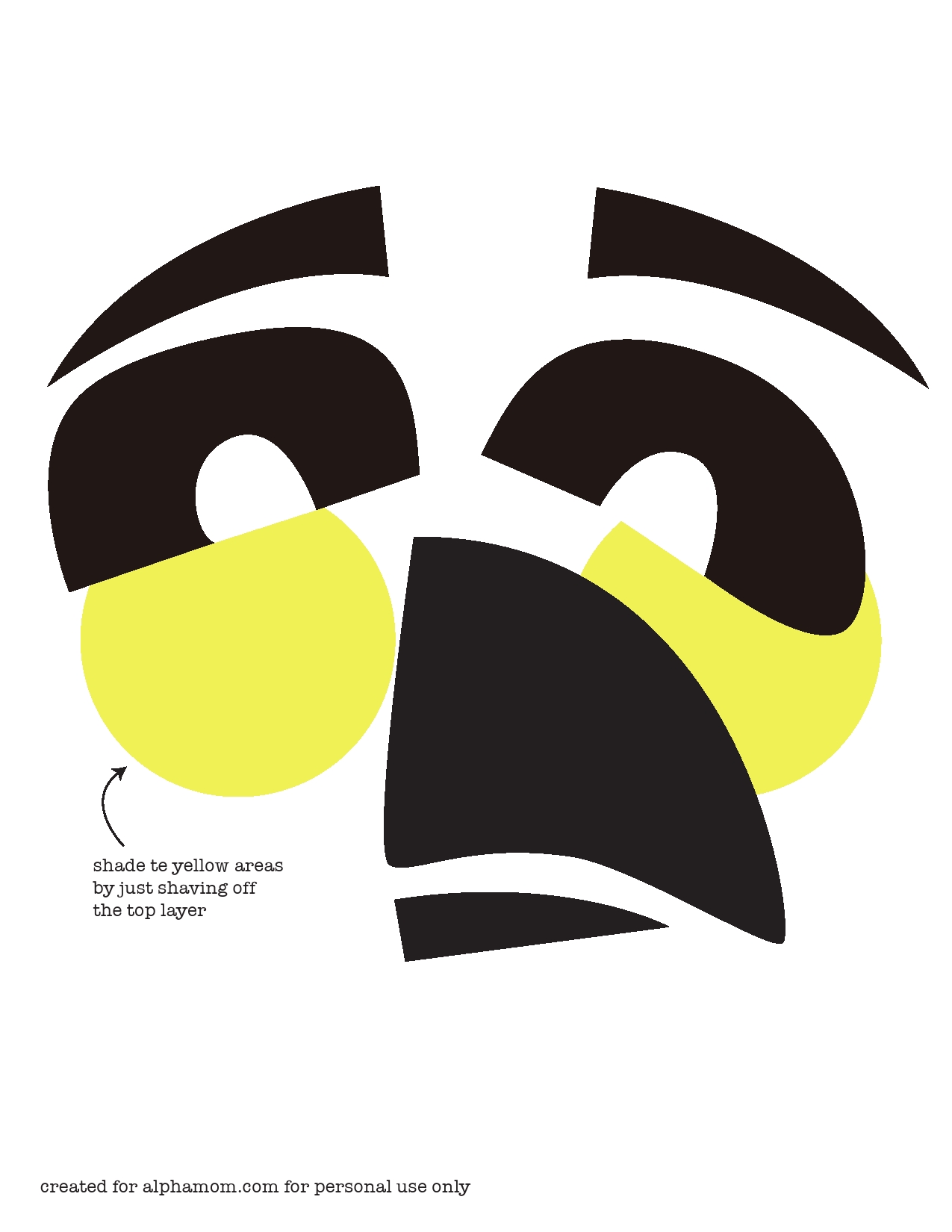 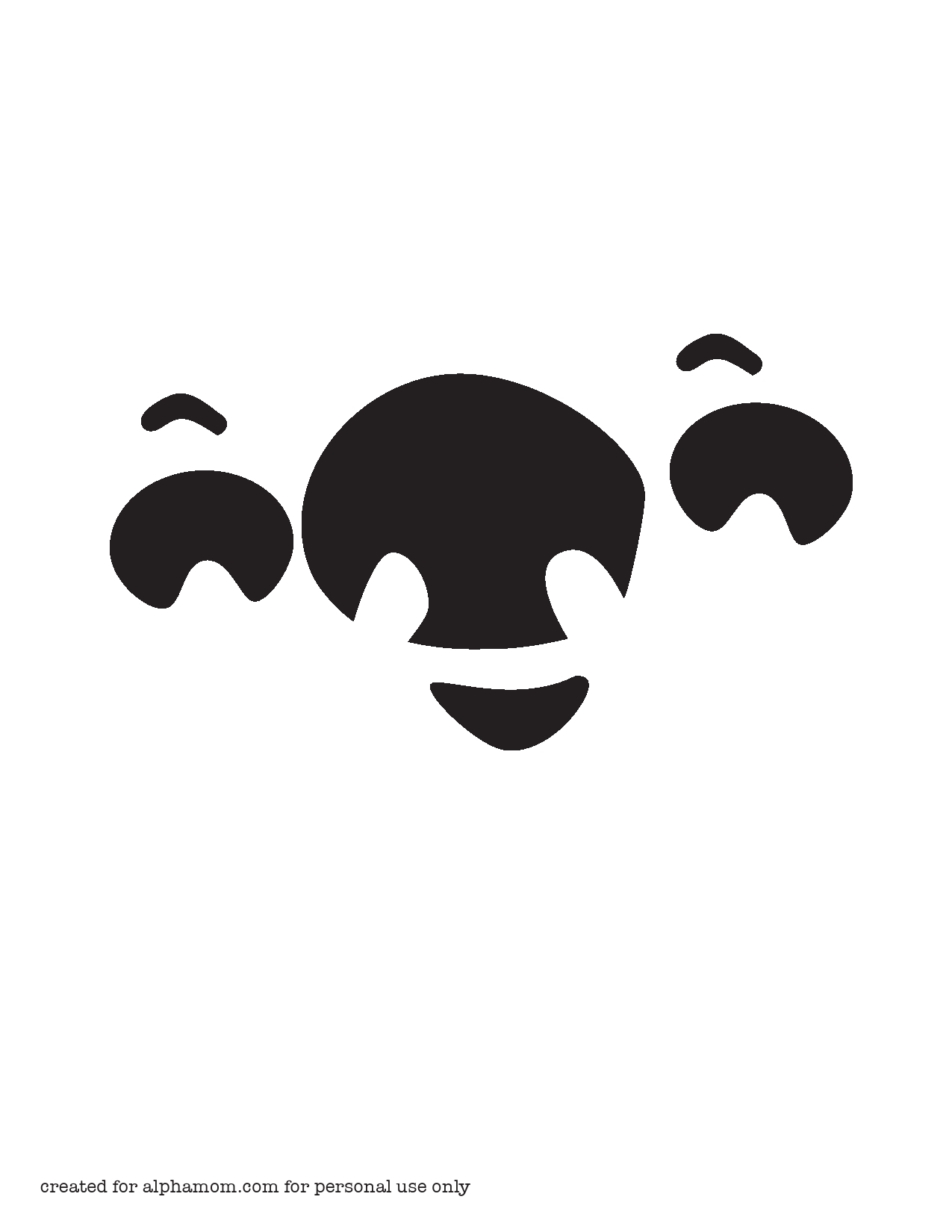 No Halloween is complete without costumes right?  Well, if your an Angry Birds fan and haven’t yet decided on a costume Rovio has some very clever ones to chose from (no, we don’t get a kickback). Rovio’s official store is currently running a special where if you buy two Angry Birds Halloween products you get one free, which includes plush toys. The supply is limited, so if you want some other costumes you might check out the sites below, or your local retailer:

So dramatic! So tomorrow, we should update ABS in Ipad for Ham’o’ween so i can use Globe Bird. I will get Vitamin K and Vitamin E.

I got my costume! I just need the new game now! ;)

I’d love an AB “costume” for the truck, (Volvo VNL630), but alas, DOT (not to mention my company) won’t allow such, the spoilsports!

Here’s a picture of mine from last year!

Very nice. I can’t believe this is the first time I’m seeing that. Are you ready to master the new “Globe Bird”?

Very Cool!!! I am using the template on a birthday cake I am making for the Grandson. He ought to get a kick out of that I would think. Awsome.

hahaha this is hilarious! love it! i imagine if someone can wear this, it’ll look amazing.

Krystal Higgins has a wonderful set of templates I’ll be using this year. I like her designs, and she has more different free templates than most.
http://kryshiggins.wordpress.com/2010/10/24/jack-o-lantern-stencils-inspired-by-angry-birds-halloween-edition/
I don’t carve my pumpkins till the day before and/or day of our neighborhood’s trick or treating so they look as good as possible for the kids, but I’ll share some pics when I do. My husband has wired up some really bright LEDs for my pumpkins in past years, the best part is I can make each one its own color. I’ll be doing a red bird, yellow bird, one pumpkin with three blue birds, and a green piggy of course. I have one pumpkin left that I may do with the white bird.

Thanks, Noel. We will try and update the post with this info. Amazing work!

These will top my Darth Vader/death star/star wars logo pumpkin… awesome templates, keep em free, going to post all eight when I finish carving them.

oh so cute! black and white angry birds! i suddenly found that they are so easy to draw. :)

@amslimfordy – Thanks so much for putting up a News Item for this great post – how I missed it for the last 3 years, I have now idea, but so happy to find it now. Wasn’t going to do a pumpkin this year, but now I think I really have to!

Love all the resources and the amazing examples in the gallery. Plus the video is too adorable for words.

Most awesome idea of all, though is using a Dremel or flex shaft to do shading! I’m a metalworker and jewelry maker, so I have both a Dremel and a professional flex shaft, and an alarming collection of used burs (because jewelers never through away old burs…). I remember last year giving my husband a handful of burs to try out, but with just a hand vise to chuck them into. This year, I’ll be clearing off my jeweler’s bench, covering everything with plastic and paper, powering up the flex shaft, and letting the pumpkin bits fly! Silly of me not to think of this before…this is the same technique we use with material like wood or Delrin to make jigs for forming production components.

Ooh! And don’t forget the cookie cutters for basic shapes! I’d use them before cleaning out the pumpkin, tapping them in carefully with a mallet.

I feel compelled to point out one major oversight in your awesome post, @amslimfordy: you forgot to mention that “pumpkin guts” smell like heaven! Or at least like childhood memories, family, autumn, falling leaves, Halloween, the legal right to make a huge mess, anticipation, and pure fun. :-)

Thanks again for the memories and the exciting modern inspirations!

The “Ghost of Halloween Pasts” just could not get any better. The melancholy of what was created does bring back fond and good memories. The special day is near and all the monsters will reappear.

I’ve been on seasons since launch day and love it. Mostly I’m interested in the Halloween and Christmas levels and long timers here will know me for my daily posts on the score challenges for Christmas.

Here’s to another 6 years!!

Rank: Flinger with 0 points
By Awesomepow (@)

Pingback: The ULTIMATE List of Free Pumpkin Carving Stencils | 31 Days of Halloween | Momma Knows It All