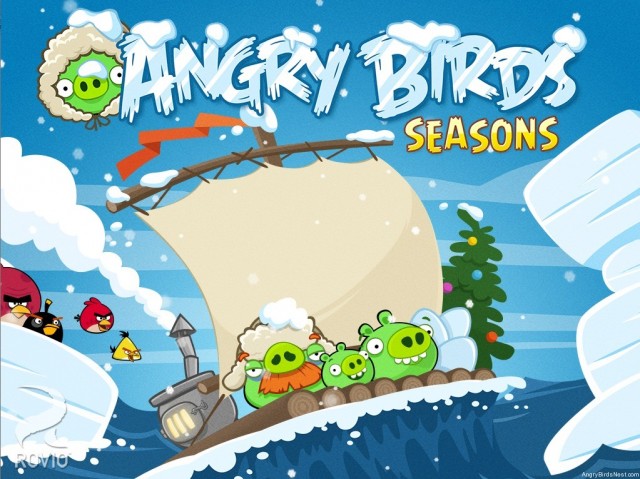 Grab your snow boots and a thick down coat, as we’re heading to the North Pole! Rolling out a few days before we expected, Angry Birds Seasons Arctic Eggspedition (v4.0.0) is now available for iOS, PC, Mac, and Android via Google Play and the Amazon Appstore, with other platforms coming soon.

Crashing during startup? Rovio is aware of the issue on both Android and iOS. Uninstall/Reinstall seems to work most of the time, but please backup your data first! If you still experience issues when restoring progress, try restoring only the highscores.lua file.

v4.0.1 is being rolled out for relevant platforms and may fix the crashing issue. We encourage all users to update.

If you haven’t recovered from Turkey Day here in the US, start burning off those calories in Arctic Eggspedition. If you’re from outside of the States, join us in an epic countdown to Christmas — even if it’s summer in the southern hemisphere. This will be our fourth celebration of the holiday season, and in true tradition levels are unlocked in an Advent Calendar format!

Participate in the ABN Arctic Eggspedition Challenge starting each night at 7pm PST! A new Eggspedition level each day! Do you have what it takes to top the leaderboard?

@AMslimfrdy, I play on iPad and cannot see how to unlock all levels. I thought getting glasses would help, but it appears I am sill blind as a bat!

@AMslimfordy … I can’t type either…

This episode is pretty easy! Just gotta know where to aim the birds.

Agreed… seasons is usually the hardest game with this type of gameplay imo, and this episode shocked me at how easy it was…. finally got the hd version for kindle (free and ad free aren’t compatible with kindle as of this update, same with short fuse and rocket rumble) and was able to 3 star all levels available (1 through 21) in one night without walkthroughs, usually on the first completion on th elevel.

@AMslimfordy. Hi. As far as I know, both Short Fuse and Arctic Eggspedition are available for PC, BUT: when I open ABO and ABS, it doesn’t pick up that an update is available. Is there a way that I can prompt it to look for updates? Normally it does it automatically provided you are linked to internet… Am I missing something? Thanks a lot. ABN is awesome!

short fuse is yet not available for PC..

Thanks for that, @arushss. That explains ABO silence. ;-)

Do all the levels already downloaded with the app? My device has only WiFi connection, while there’s lack of WiFi hotspot on my town :(

“You must be connected to the internet the first time you play a level”.