Alright, I have a copy of the Rio DVD in hand and I think it clears up a lot of confusion. I will do my best to articulate this for everyone. How you obtain the new “Golden Beachball” episode differs depending whether you’re on a iOS/Android device or PC/Mac. It’s unclear if other platforms will be supported, but at this point the instructions the come with the DVD currently say, “Available on iOS and Android only” (in addition to the PC & Mac). I’ve broken the instructions below and linked to the scanned images of the actual inserts found in the Rio DVD / Blu-ray (sorry, the code is obscured).

First though, a bit of background on the new episode. Currently the “Golden Beachball” episode contains 15 levels. Most of the levels are quite fun and some are actually pretty challenging. The leaderboard and walkthroughs are ready!

To unlock the new episode you have to find the Golden Beachball that is hidden in an existing level (video walkthrough below). You DO NOT have to enter a code. This works in both Angry Birds Rio and Angry Birds Rio Free (as of the v1.2.0 update).

Note, for unknown reasons the Angry Birds Rio v1.2.2 Mac update didn’t contain the Golden Beachball episode, so Rovio has offered up a new method of obtaining it.

Below are a couple screenshots: 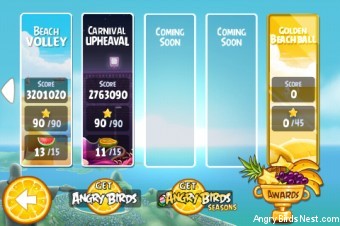 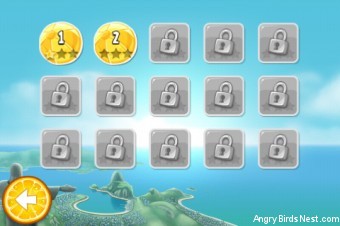 Did you get the Golden Beachball levels? Because on PC and Mac you need to buy the Rio DVD to get access to the levels. Also, if it didn’t go to 17/15, it may be because you don’t have the proper 15 watermelons. Do you have the trohpy with the star on it for the Beach theme, because if you don’t, it means you haven’t gotten all the hidden watermelons.

Where is the spot to click on to enter the code for the Mac? I can’s seem to find it with the Mac version.

As stated in the Mac v1.2.2 post, there doesn’t seem to be a Redeem option available. We aren’t entirely sure why tho.

I just transferred the high scores from my iPad to the Mac for both Angry Birds, and Rio. Has anyone tried to use the scoring transfer to open the levels?

I know this doesn’t concern this but I know what the next update is. The angry birds are going to the AIRPORT! I was looking at the Game Center leader boards and saw that after carnival it said Airport so after that I came on here to notify everybody! Your Welcome!

I have Angry Birds Rio. I finished Carnival and I see that the new levels came out on my boyfriends tablet but I don’t have them on my PC???? How can I get them?

Which levels are you referring to? There are directions on this page to unlock the Golden Beachball levels. The Airfield Chase update is not yet available for PC.

Thanks for telling me, I got the beachball on my friend’s Ipad, so I could play Angry Birds as much as I want.

I have some good news for all Symbian users! Those Golden Beachball -levels are possible to get in the v1.3.0! I think that’s great, bacause first information was that this pack is available for iOS and Android only. Then I was sad, but now this makes me even more happy!

Ps. There is new game available for Nokia C7 users. It’s called Angry Birds Magic, and it uses NFC-technique. You can download it with this Symbian Anna. (If you didn’t know it before…)

how toget a golden beachball

when I launch the angry birds game i get the play option but that’s all. When I click to go to the levels there is no place that says redeem code!!! All i have is the option to play the next level i have unlocked. So help please i want to play rio

What device are you playing on?

I would imagine you are not entirely up-to-date. If you click on the ” i ” logo on the main page, what version does it say? v1.x.x

Whoa…. Are you playing on chrome.angrybirds.com ? This post is not related to that app. This is for the full PC version of Angry Birds Rio, available for download and purchase at download.angrybirds.com.

hi! do u have angry birds rio free for bada samsung phones? like samsung wave 525… thanks

I believe Bada OS is still a work in progress.

I am on a PC, and I must have downloaded Rio after the update to 1.2.2 came out, but I don’t have a Golden Beachball level, nor do I have a redeem code. Is there someplace to get it, or what do I put in the “enter code” box to open this level? Or, geez, maybe I have it and don’t know it!!?

For PC, you need to enter a “Redeem Code”, which is found in a copy of the Rio (movie) DVD or Blue-ray.

Oh, I get it. I have to go to Wally World and buy the Rio movie to get the code. Well that sucks. But, one does what one has to do to feed the addiction, right? So now I just have to wait for seasons PC to be released, then wait for the Mighty Eagle for PC, and Mooncake Festival for PC and Airport Chase, or whatever it is. (Is that in Seasons, too?). I wonder what would be available to play if I bot Amazon’s new Kindle Fire?

Airfield Chase is part of Rio (already available for PC). I haven’t heard about a Kindle version of AB yet, but the NOOK has one so it’s not far fetched.

So, does the Airfield Chase unlock along with the Golden Beachballs when I buy the movie?

No, Airfield Chase is a forthcoming update to Mac/PC. We expect it to land relatively soon — and will create a post on the main page when it does.

OK, I am officially either stupid or completely illiterate and unable to read and comprehend….BUT…..I can play AB! So….I’ll go buy the movie to unlock Golden Beachballs, and watch for the release of Airfield Chase for PC. Big sigh. Thanks, AMslimfordy, for the info and especially for your infinite patience.

I bought the Rio DVD last week and much to my disappointment, there is no voucher with the code inside. I thought that I was the lucky guy who got a faulty exemplar, so I headed back to the store and asked for a replacement. The clerk opened up 2 more copies and I was quite surprised that they also didn’t have vouchers inside either, although they got the “Free AB RIO Levels” label on the front cover.

I have contacted the Fox Customer Care from the unlock website but they haven’t replied yet.
Is there anyone with similar experience as me? I live in Indonesia.

First I’ve heard of it, though the topic calmed some time ago. Hopefully Fox will have an answer for you shortly.

hi, where i can download latest version of rio for pc… thanks

download.angrybirds.com should work fine. The most up-to-date version is v1.3.2 with Airfield Chase.

OMG..where have I been…I just found out about the secret Golden beach ball levels!!! Yeah 45 NEW levels to play !!! I can’t believe I didn’t know about this!!! Can you PLEASE tell me when this became available for iPad players and are there hidden fruits on this level? Thank you in advance!!!! Yeah!!! A while back when I ran out of levels, I would Google things like secret levels for AB, RIO, Seasons,etc and never found any…I searched many times with many different questions asked all kinds of ways, anything I could think of just hoping there was one out there…thanks to a recent post I got in an email from managing my post I just happened to find this!!!

This was released for iOS on 1 August. No fruit, and no achievements.

Oh, ok thank you Slim…I still can’t believe I didn’t know or find it with ALL my searches, lol…I hope I’m not missing out on any others…? Hmmm…yeah I see now its only 15…when your on the page to choose which one you want to play it says 0/45 but once I opened it, I see there’s only 15…does that mean they will probably update it since they made it say 0/45? Thank you so much again…it was your post on the leaderboard that allowed me to find it…YOU ROCK!!!

I was able to unlock the golden beachball with one bird.
I fired the bird down at an angle and let him bounce to the side.
Once he got underneath the bouncing revealed the beachball
And the next bounce got it. This worked the same way in the free version.

…Yes, the video does it in one shot as well.

Just a heads up for anyone with a blackberry playbook. The golden beachball levels are available using the level 6-13 method in the video above.

sir：I come form china.I like this game so much ，but I cannot pass Golden BeachBall #11.
I need help.I donot speak English very well. Thank you very much！

Perhaps our video will help you out. Welcome!

Ugh I thought I was done with Rio until I was entering my scores in the leaderboard and found the golden beach ball levels!! I now know what I will be doing with my day today!

Hi, after reading the information about Rovio only allowing the code for AB Rio ONCE, I take it there is no way to regain the Golden Beachball levels. I had to replace the hard drive in this computer, thus losing all my scores and the code I intially put in when I purchased Rio movie. So I am doomed, right? BTW, thanks, AMslimfordy; I appreciate all the help & info on your site.

This is PC/Mac? You may be lost.

Sorry, thought I included that info. Vista PC. Yeah, figured it was a lost cause. Pretty frustrating. Thank you, AMslimfordy. -g

You may want to check with Rovio, but unfortunately, that may be the case :(

Will do. Thanks again. Almost not the end of the world for this AB addict…

I purchased Rio on Blu-Ray 2 years ago, had this on my computer, however, had to reformat and can not find the voucher. What can I do?

Those codes were one-time use, as far as I know. You would have to contact Rovio, but unfortunately, you may be out of luck, sorry.

For future reference, it may be worthwhile to check out our Ultimate Backup Tutorial.