Welcome back! We’re up to lesson three of our Angry Birds Go Offensive Driving course, and now we focus on true offense in Wheel to Wheel Combat. This lesson was written by @les-toreadors of Pigineering and adapted for the ‘Nest by @amslimfordy.

In your job of ferrying the all important eggs down the mountainside, sooner or later you are going to be beset by a horde of upstart pigs who want to relieve you of your precious cargo! Soon, you are forced to make a ‘flight or fight’ decision on whether to confront those unruly rolls of bacon fat, or try to outrun the opposition. But the pigs are too many, and you decide that, as the impromptu defender of avian honor on this very road, you are going to make a stand… 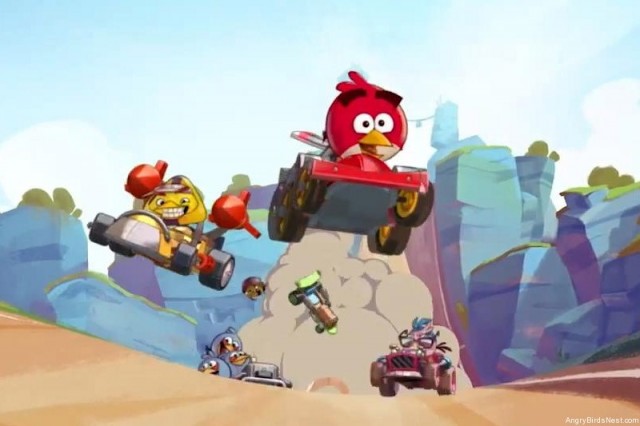 Angry Birds Go does not penalize you for causing mayhem on the track. No lifetime bans for punting opponents, no revocation of licenses for making those lazy porcine drivers roll after you’ve blown their contraptions into fragments of balsa wood.

Quite the contrary, an early successful punt guarantees the opponent won’t catch up to you in a Champion Chase! Also, while the AI in the game is very effective (and entertaining!) at executing a prolonged wheel to wheel battle, it can’t do much if you are out in front dutifully maintaining your top speed carving out a precise line through the canyon. You do know what a perfect driving line looks and feels like by now do you? 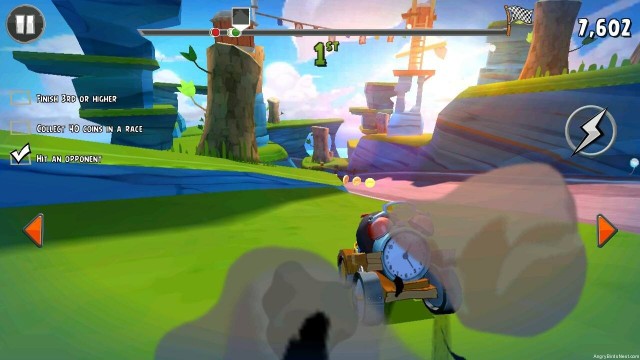 Don’t be afraid to cut that corner!

But there are certain circumstances in which you are in a situation where you two have to jockey for position seconds before the next corner. Whomever takes the inside of the turn very likely will be able to generate a momentary speed advantage, and here are several tips for wheel to wheel combat that you may find useful once in a while:

The PIT maneuver, commonly used for taking getaway cars off the road in a police chase, is highly effective in ABGO. Pushing on or outright ramming an opponent kart’s back wheel from the side induces a large torque on the vehicle and will cause it to spin out, giving you an easy overtaking opportunity. You have to do a clean PIT maneuver on the target so as to actually be able to overtake, rather than pushing it with your nose into a stable drift.

You may from time to time also elect to cut a corner by driving inside an opponent’s line then deliberately straightening out to cause a crash in your favor – basically steer straight into the side of a cornering opponent, who spins out while you cruise off to victory.

You can also elect to go defensive, and concentrate on holding a steady line to the next corner. A defensive run is useful if the opponent does not have any means to explosively attack your kart (looking at you, Bomb Bird), yet is attempting to push you out of line. The opponent kart is alongside and attempting to steer into you. Doing so causes the opponent to lose a slight bit of speed, which can be decisive at times. In other cases the AI will elect to lock itself into position with you in this manner, while being unable to exert enough rotational force as in the PIT maneuver above. This allows you to control the opponent kart’s position, and you can easily steer that rude driver into the nearest wall! This is easily visualized in Formula One where a leading driver steers hard into the apex of a corner in front of an opponent attempting to pass on his inside, forcing the opponent to brake or crash.

And yet at other times the best solution to the wheel-lock problem is not really to stagnate yourself in a fruitless pushing contest but to back off and change your line. Often, when you attack an opponent wheel to wheel in Champion Chase, the opponent goes defensive and smartly concentrates on holding his or her line. Why? It’s because he/she is holding the optimal driving line through the course and by passively holding top speed with minimal steering input, he/she is successfully maintaining the upper hand while you lose energy trying to jockey for position. The correct way to break this deadlock is to back off and setup a clean pass. Or use your special powers and try to disrupt/ram/mobility kill your opponent. It’s up to you. Just don’t keep up a fruitless wheel-lock scenario and leave yourself at the mercy of the AI’s next move!

@BirdLeader — I think you put an incorrect link in your tweet.

@AMSlimfordy — At the end you list all the courses, but the links for 4 and 5 aren’t active. Since they exist on Pigineering, you could link them to that site until the ABN courses are active. Also the link to 3 isn’t active — I know it would come back to the same page, but maybe it should be active.
Cheers!

Good advice and the game is so much fun!!!

Of course i meant ‘where to’ and ‘know’ instead of ‘knowledge’

PIT maneuver is really good! I won most races with it. I always maintain driving-line if my opponent is ahead of me in Stunt Tracks. ;)

Great article and never tried to cut the corner in the grass. Presently playing the same level as in the pic above and going to try it. Thanks for the tip.

@amslimfordy:
Question 1: What does AI mean in this sentence above: “Also, while the AI in the game is very effective (and entertaining!) at executing a prolonged wheel to wheel battle, it can’t do much if you are out in front dutifully maintaining your top speed carving out a precise line through the canyon.”

Question 2: I noticed on Game Center that I am not very good in the item of “Slipstream”. Will you be offering a lesson on that subject or can you inform me as to what that is?

Question 3: In Race Challenges per say, when it says “Completely trash 3 opponents”, how does one do that. I have ran them off the road, into rocks and tnt, etc., but unable to obtain a credit for that item.

1) “Artificial Intelligence”.
2) The “Slipstream” is the area of low pressure directly behind an opponent. Driving in the slipstream of an opponent decreases the wind resistance on your vehicle, allowing you to travel faster with less effort.
3) Landing on top of an opponent via the slingshot is the best way. The game’s definition of “completely trash” is to knock the racer out of the vehicle.

@amslimfordy
Thank you for the info, just one other technique I cannot figure out:
How do I “finish a race without your kart”?
Have not ever seen the characters leave their kart at the finish line. Have not been able to master any technique in Seedway to get them out the kart, especially when crossing the finish line.

You’ll have to self-destruct your kart so your bird/pig rolls over the finish line, from what I’ve heard.

How i can self-destruct car?

@kpfreeze just keeping damaging your kart enough and it will work

@amslimfordy and @birdleader,
The official Angry Birds facebook page linked to this lesson.

Good advice, but there’s no combat by power up for foreman pig. squawk!