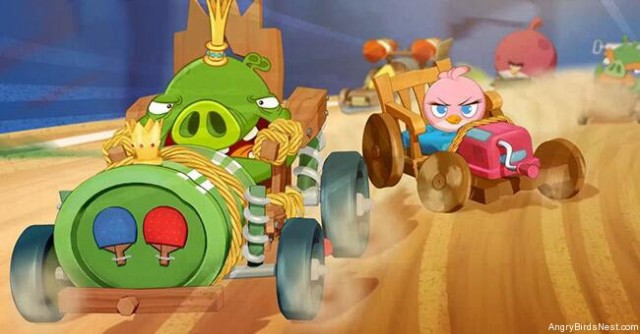 Welcome to our first Angry Birds Go strategy lesson. This lesson was originally written by @les-toreadors of Pigineering, with support of @dh-kim. This is the first guide in a multi-part series that will be adapted from Les’ awesome Angry Birds Go “Offensive Driving” course written on Pigineering.com.

In this chapter we will cover the basics of driving in Angry Birds Go!, and only driving. It’s up to you to look out for any route shortcuts, game-beating exploits and other undocumented features that Rovio adds to each Angry Birds game for fans’ enjoyment! Drive hard, drive fast, and don’t just follow the beaten track. Explore and appreciate the surprisingly detailed track environment, and you just might be amazed at Rovio’s trademark attention to detail. If you find something interesting please be sure to share it with the community by leaving a comment below.

While not intended to function as a realistic driving simulator, Angry Birds Go’s features a dynamic and entertaining physics model that can be used for maximum advantage for your own entertainment. AB GO provides excellent feedback for every bump, jump, and even the slightest of steering inputs. This attention to detail allows you to implement a variety of racing tactics commonly used in more serious racing simulators. Let us proceed to explore the idea of bacon-dynamic driving techniques and concepts such as:

The Road is your Battleground 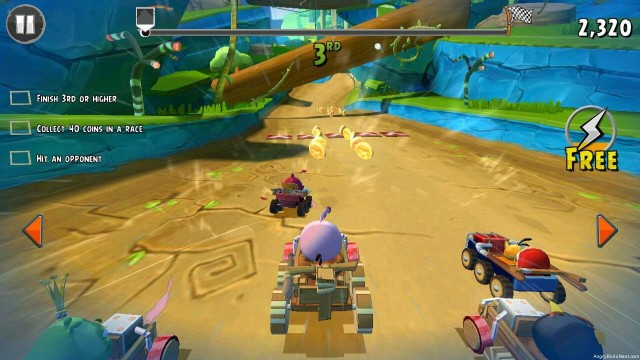 Your daily job involves carefully ferrying eggs down the mountainside, but sooner or later you are going to be beset by a horde of upstart pigs who want to relieve you of your precious cargo! Soon, you are forced to make a ‘flight or fight’ decision on whether to confront those unruly rolls of bacon fat, or try to outrun the opposition. But they pigs are too many, and you decide that, as the impromptu defender of avian honor on this very road, you are going to take a stand…

Pigs and birds have never got along on Piggy Island. Tactical driving is part and parcel of winning in Angry Birds Go! In the early stages of the game, punting opponents into the side of the track is a perfectly acceptable way to gain the upper hand. So is slingshotting your kart right on top of an opponent’s and dismounting him right at the start line!

But eventually, the Bacon Strikes Back! (Sometime in Episode V I think.) The “offensive driving” AI is very good in ABGO and frequently will run you out of line and into an unfavorable position in a blink of an eye, especially in the crucial Champion Chase levels. Knowing to anticipate attacks is part and parcel of survival in this epig struggle for egg, cake and coin. As the driver-in-charge, you are also expected to make split-second decisions on whether to fight opponents directly, or out-drive them in the hope your speed and precision outdistances them decisively. At other times you can also out-maneuver or ‘counter-spell’ an enemy’s ability such that its negative effects are only felt by the opponent while you cruise on by to victory!

As the game progresses to a high stakes bird vs pig slugfest at breakneck speeds, expect direct and continuous attacks on your kart. It’s up to you to make sure you have a winning chance, and often, offense is the best defense! So get crazy and ram those pigs off their karts! 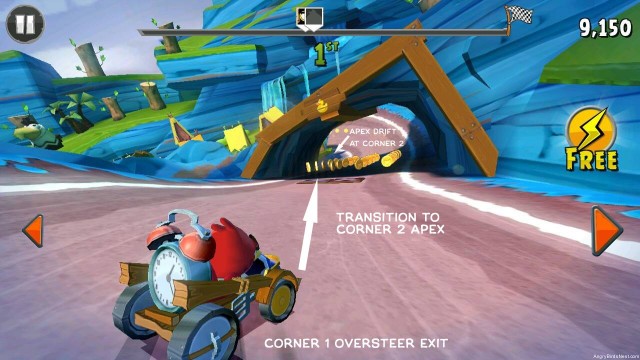 If you have watched or participated in any form of track-based motorsports, you’ll know what a driving line is. It’s a line that is designed to carry as much speed as possible through the course, and with exceptions, it isn’t driving in the center of the track. You see Formula One cars diving in to the inside of each corner so they can get back on the power as soon as mechanically feasible. You see rally cars dunk their front wheel into a ditch to help sling them around a corner while drifting at insane speeds. A driving line not only allows you to maintain speed, it exploits physical features of the environment such as terrain and track geometry.

The closer you get to the inside of a corner (called the apex), the shorter the distance your kart has to travel. Aggressively attacking each corner gives obvious benefits over an opponent using a more conservative (and safe) driving line. The vehicle that is closer to the apex can potentially shave off precious seconds when traversing that particular corner.

But there is a bit of planning to do before you attack a corner. You do not want to hug the ‘inside’ wall all the way, because it will force you to execute a sharp turn, shaving off precious momentum in the process. You have to note as well the tilt or camber of the track, because it affects the steering input required to tackle the course. Off-camber, or track tilting away from the direction of the turn, will require greater effort to turn as gravity will drag you away from the apex.

So drive hard! Drive fast! Get into that apex and hug it and literally, slingshot your way through the course! It’s easy! Even 2 year old piglets can do it!

Great lesson @les-toreadors. Very helpful, can’t wait for more! Oh, and thanks @amslimfordy for putting up the post, and thanks for the screenshots @dh-kim!

Thank you for your kind commentary!

It was not intended to be the usual ‘3 star’ guide but insert a bit of roleplaying and ‘out of the screen’ thinking :)

To all involved in this post and lesson 1 (les-toreadors, dh-kim and amslimfordy) thank you. I just started to play GO for the fun of it. It is great to drive a vehicle with the iPad. Very entertaining.
Thanks for the tip on jumping on another vehicle at the start line. I was the one who was getting spun around a lot.
I have to go back and read the ABN post on GO because I have not developed a plan and just playing for the fun of it. Opened up the first two tracks almost without knowing how.
Nevertheless, I usually learn from the ABN lessons (previously developed ones on the Mighty Eagle) and will have to reference the write ups of les-toreadors to get current info. Thanks again and hope there are more to come.

The links to the complete Offensive Driving Guide are in the New Forum:
https://www.angrybirdsnest.com/forums/topic/piggy-island-offensive-driving-course-angry-birds-go-gameguide/
The whole thing is a must read if you are playing AB Go.
I assume the intent is to turn all these chapters into a AB Go Strategy Guide.

How can you finish a race without your kart? Please help :-(

If you are on Air episode it’s more achievable : just from beginig lets the kart go crazy using Stella : and in the very end crash the cart on a fence. You need to try many times I didn’t : but I couldn’t on others episodes. Good luck.

Does anybody have list of challenges (as many as possible)?
I completed all tasks in all episodes and 15-20 challenges per each episode. Just wonder how is it possible to get “completed 720 sets of challengesd” achievement in GC? Cheating??? Purchasing tons of gems for skipping them and then count them as completed?
Someone mentioned that same kart with different CC is considered as tWO karts which isn’t true…

@cosmo2503 Regarding to “Someone mentioned that same kart with different CC is considered as tWO karts which isn’t true…”, I didn’t check it but maybe you have to complete a partial upgrade in the kart to consider it different one. You know there are only 2 or 3 partial upgrades until you fully upgrade your kart. For example, in Seedway, chosing Semi-Skimmer, if you upgrade first times until you have all lines of yellow colour (6 lines in Speed, 4 in acceleration, 4 un Handling and 4 in Strength), you have a message like “Congratulations! Your Kart gained a level” or something like this. Maybe at this point it considers a new kart.

@wazemank I play with telepod karts and particular challenge I tried was on Rocky road where I have Terrence’s Boom Boom kart. It was almost fully upgraded (max speed+max acceleration, 3 lines for control and 2 for strength) I upgraded control, add one line, won race but it wasn’t counted like new kart. I’ll try to fully upgrade it and see if it will work.

In these partial upgrades you’ll get “Kart name X+1” from “Kart name X” and it should consider a new one. Keep us informed about this point please.

@wazemank thank you very much. I never noticed that change in kart number. It is perfectly clear now.

@amslimfordy, Angry Birds facebook posted a link to this lesson this morning.

When I went on Facebook, there was an app named Angry Birds Go!. If anyone has it, what does it do?

I suggest not clicking on any third party or ‘fake’ community pages at this point.

As for the ABGO “app” on Facebook, it is currently undeveloped. I noticed that there’s no real Facebook content when I shared top scores on Facebook for bragging. A bare-bones “I scored X in ABGO” text message was posted but no further FB app integration exists at this point.

@BirdLeader @AMSlimfordy — @Nacho18 started a list of AB Go players, the number of challenges they have completed, and whether or not they use IAPs or telepods. I think it’s a good idea, along with @Cosmo2503‘s suggestion of a list of challenges. Might be worth a tweet or two.
Maybe the list of challenges could be part of one of the lessons or a separate guide.
Nacho’s list is in the forum if anyone is interested in supplying info:
https://www.angrybirdsnest.com/forums/topic/angry-birds-go-help/page/5/#post-41775

@MVNLA2 @Cosmo2503 I contacted with Rovio’s support by mail to know if there’s a list of challenges we can consult but their answwer hasn’t satisfied me. Here it is the answer:

(…) We’re working on adding more challenges, but we’re not ready to divulge what will be included in the coming updates. News on new features and other stuff can be found through the links at the bottom of this email. Be sure to check them out, and of course keep your eyes open for an update coming soon!

Is Angry Birds Go! available for a desktop PC running windows 8 or the PS3 and PS4?

You Know Which Episode Makes You Drift Perfectly?

Know all The Superpowers Of Birds? Know It Now!

This is really cool. Keep up the good work fellow nesters