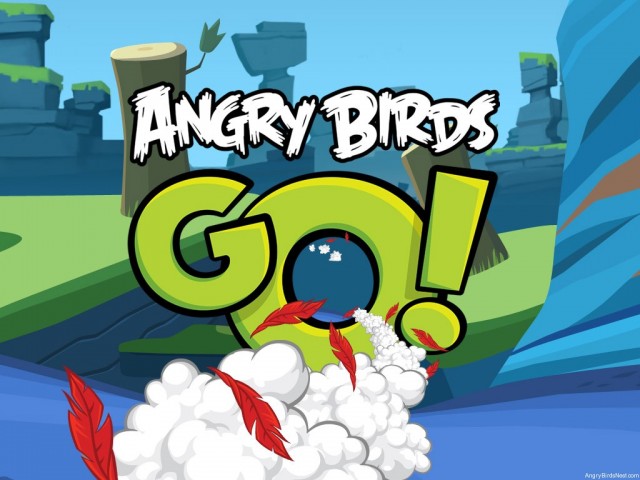 Rovio is out in LA today at the world-famous E3 (Electronic Entertainment Expo), and they took this opportunity to announce A BRAND NEW GAME!

The game is called Angry Birds Go! and details are extremely limited at this time. Rovio’s initial tweet says “The evolution of Angry Birds will be known as #AngryBirdsGo!”, and on Facebook confirmed that it is indeed a brand new game.

For now, you can head to go.angrybirds.com to see what Rovio is willing to show us. Here’s what I see and here: I hear the beeping of a starting line (like in drag racing, for example) and see “Ready, Set, Go!”. I then hear the iconic sound of a slingshot being stretched, and see a red blur speeding away in a cloud of dust.

Those birds and piggies are getting ready for their most thrilling and action-packed game yet! All your favorite characters are returning for a brand new title that will bring you closer to Piggy Island than ever before. It’s Angry Birds, but not as you know it!

As we said, there’s little-to-no details out there. But hey, we wouldn’t be the best Angry Birds fan site on the web if we just sat here and didn’t speculate!

As information comes in from Rovio, we will either update this post or create new ones. We all know (too well) how Rovio loves to tease, and we can expect the same about Angry Birds Go.

What are your thoughts? Let us know below!

I fear that AB Go will be a full game in the same style as Red’s Mighty Feathers. It seems like the release of the RMF episode might have been Rovio’s way of introducing a new game – that is a sneak introduction. Personally, I think the RMF episode is a step in the wrong direction in the AB sphere. A new crossover game between AB and Bad Piggies is Ok, but leave AB as it is. The only reason I can see at the moment for releasing RMF is for Rovio to see what the fan’s verdict is before actually introducing a full AB Go game. Just hope that I am wrong.. I rather pay – willingly – for a full AB 2, then getting another weird crossover version between AB/Bad Piggies.

You could be right. If you watch the trailer of Angry Birds GO, you se … RED FEATHERS!

Exactly. There are several things that leads to my “conclusion”. Another thing is the lack of information about the new release from Rovio’s side. Usually a teaser gives more information about the final product. Maybe Rovio is in a creative process and tries to create a crossover between AB/BP that suits the fans . Maybe Rovio is adjusting the final product based on feedback on the RFM episode? Time will show.

Personally I would like to see something brand new.

It’ll probably be something like “Fun Run” except with birds and pigs. “Fun Run” was a great game but it lacked design and effort.

Oh gosh, it better not be another endless runner!
Like temple run. Hmmm.. probably is

Maybe the gameplay is like level 3-40 on Hoth, angry birds star wars, continuesly moving, but instead if the millenium falcon moving, a racecar moving.

Angry birds on facebook: What kind of game do you think Angry Birds Go! will be? An endless runner or a kart racer? Vote here: http://rov.io/GoPoll

It could b both.
I mean a kart racer where you can either play races on tracks or endless mode.

I hope a kart racer game, they are giving us more and more info last time :)

Doesn´t this look more like a kart racing then endless running: https://www.angrybirdsnest.com/members/bad-piggies-2/album/picture/5596/

Hopefully wouldn’t be endless runner whatever else it be. Cart racer could be appealing to younger players, not my type of game but certainly better then endless run IMO.

Someone wrote like this to AB on facebook: If it does not have a sling shot I won’t play it!!!!
Answer from AB: That will be our next poll. “Will Angry Birds Go! have a slingshot or not?”

I think, they’re just joking :)
The game is not cancelled.

Will be another Running Game, just liked Temple Run or Minion Rush??

Race, crash and win! The popular Angry Birds app comes to life in this epic Bomb’s Race Kart Game! Can you triumph in this fast-crashing game? Your zippy kart has a fast driver, and when you fire it at the block with your launcher, you’ve got 1 shot to hit it or it’s the other player’s turn! You can play by yourself to beat your own best score or take on your friends. Whoever hits the block 2 out of 3 times wins! Become the feather-flying champion of the Bomb’s Race Kart Game!

I don’t think the toys are designed good they look like there from MacDonald’s or something but the game is probably going to be fun!