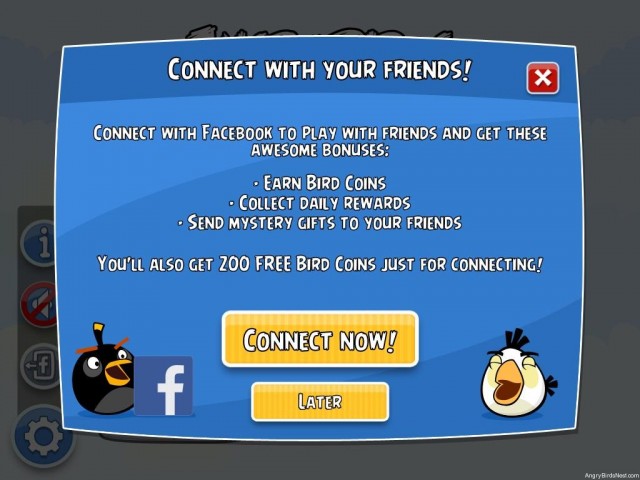 Not to be outdone by a release from their third-party publishing initiative Rovio Stars (read more about Tiny Thief here), Rovio pushed a small update to one of their own apps.

Angry Birds Friends v1.1.0 has been released for iOS and Android via Google Play, and primarily includes miscellaneous bug fixes. But most notably, the app now allows you to play the weekly tournament without a Facebook login! This feature was widely requested, since so many people want to play the game but don’t want to deal with the hassle of a Facebook profile. (Can’t really blame them, now can we.)

So if you’re new to the game, be sure to check out

Just a friendly reminder that scores obtained using Power Ups are permitted on our Facebook and Friends Leaderboards ONLY.

If you play without signing in to facebook uou can’t get free bird coins.

I will finally be able to play without entering facebook.

Can you purchase bird coins without logging in to Facebook? (I know you can’t earn free coins)

Does not seem to work on iOS 7 beta 3. Can anyone confirm or bust? Game freezes after login

I have same issue months from now I still got no answer. I have LG 5 and I can’t log, same freeze and restart :( HELP, please

Unfortunately, they have not fixed the main bug: it still does not work on iOS 5. Everything works fine on iOS 6, but this game is not possible to play on old iPads with iOS 5.

I myself have new iPad with iOS 6, but my Facebook friend with whom we compete has an old iPad with iOS 5, and he has not been able to play Friends on his iPad, could only do it on his iPhone (which he doesn’t like much because of the small screen). Today, when he saw there was the update, he got excited, but it turned out that the problem was not fixed. :(
The problem is connection with Facebook, not the game itself. It is possible to play now without connecting to Facebook, but this is not what he wants (one will just play as a guest and will not be able to compete with others).
When trying to connect to Facebook he has the same problem as before the update, it just doesn’t connect, which make the app useless on his iPad. I think he reported this to Rovio before, but I am not sure.

@amslimfordy and @annach – I have an original iPad. The version is 4.3.3 (8J3) and I was able and downloaded the app when it was released on iOS through facebook login in. I played the first week or two of tournaments. I just thought you may want to know. Perhaps it’s a different issue with your friend that he is unaware of. That’s very strange.

Today I downloaded AB Friends on my old iPad (borrowed it from my daughter who upgraded it to iOS 5 and uses it for other things). I can confirm that it has severe problems connecting to Facebook. I went back and forth between the AB Friends and Facebook apps multiple times trying to connect, and after numerous attempts I finally connected and was able to play for a while. Then, after I closed it and came back to it later, I had trouble to connect again and gave up. On my new iPad with iOS 6 the game connects to Facebook automatically and right away after I open it. Not so on iOS 5, where it is a real pain and makes it practically impossible to use. @amslimfordy, if you still have one of those first generation iPads running iOS 5, try it for yourself, and you will see what I mean.

It works fine on iPad 2 with iOS 4.3.3. It’s weird that players with later iOS have problems.

Doesnt work….can’t connect to game withnor without facebook. Identity resolution failure error message. Im right peed off. Rovio have given up replying to my mails. They either cant help or cant be nothered anymore.

@annach I’m running ios 5.1.1 on a 1st gen ipad. I downloaded AB Friends this evening & it is working, it is connecting to my Facebook account automatically when I open it. I had previously played it on my PC, but I don’t know enough about these things to know if that makes any difference.

@karen68, @lesleyg – thank you for information. Now I really don’t understand why it doesn’t connect on my and my friend’s iPads, by it works on yours. My old iPad also has 5.1.1. Could be related to some settings on my iPad or in my Facebook account? I am really at a loss now, I don’t know much about these things either.

@annach – very strange indeed. I don’t know about these things either so I’m afraid I’ll be of no help…but will add that as I said above, when they first posted about playing AB friends, I followed the instructions that slim put up in the announcement of the game and I did it on my iPad and it too connected automatically as Karen said with no issues that you experienced. Even stranger that it’s happening for you and your friend? Good luck…maybe someone that knows about these things can come to the rescue ;-)

I have not played the Tournament levels for this reason, so this is great news! Still not thrilled about the Powerips, but I can live with that.

Is it possible to access old tournament levels? I downloaded the app, but I don’t see a way to access those levels.

Have you noticed every app that gets “upgraded” to require Facebook log in, gets “re-upgraded” so you don’t have to use it?

I downloaded the newer no-facebook version tonight…
Whilst yes the levels are fun to play, I’m not overly impressed with the app as I found it incredibly slow to load between replays/menu’s, and I’m not really bothered about improving my scores either on account if this. I also don’t like having to play the game whilst online (this should be made optional once the weekly levels are available to play), or the fact that the free power-ups seem to be limited to a set amount before having to purchase them.
If Rovio improve the app within the next month or so, then chances are I’ll keep it, if not, well it’ll probably go the same way as all of the other apps that I loose interest in, uninstall!

Two weeks in and this app I’m afraid is just not for me…
Aside from being incredibly slow to load between menus/replays, I lost two decent scores today (which I’d obtained without using PU’s!) due to a ‘slight’ drop in my internet connection (from excellent to good!).
Okay, so it would seem that you can buy PU’s with coins obtained through play, rather than with real cash, but evidently, if you don’t wish to use PU’s, there is no way of competing against fellow members on the ABN leaderboards, and 28 coins for just 2 PU’s seems slightly ridiculous.
Anyhow, I’m out, thanks but no thanks!

There was not the transplant of the story level of the PC version this time either. I was disappointed!
However, without Facebook account, I felt it with the good update that an opportunity to be able to compete in angrybirdsnest was given.

I only played a few games, but already I find it frustrating. As mentioned above, it is slow to load, then ads appear when you do not expect them, making play choppy. Then there is the Powerups, and having to purchase them to be competitive. I like the concept of a weekly tournament, but I do not see myself playing any further.

Hi,@bonneypattycat.
Proportional to line speed of the Internet in the waiting time of the replay.
If there is 25Mbps, I can play considerably comfortably!

I can be a highly impatient flinger:D

I would gladly pay more for a version with fewer ads and prompts for Facebook…Rovio ;)

Does this mean we can play with no internet connection?
I tried to play in the subway (yes, we do not have connection in the metro in Montreal!) and it did not work!

Hi,@joey.
The Internet connection is necessary by all means.

If you try to play without connecting to Facebook, the game nags you to connect to Facebook every 3-4 turns. The only reject option is “later”, not “I don’t have a Facebook account and don’t want one so stop asking”. Ugh. I deleted the app.

I tried turning off Facebook briefly, but then I can’t compete against my arch-nemesis @Lisko, so there didn’t seem to be any point.

I’m not a friend of power-ups, but I’ve learned to accept them in certain isolated circumstances, like ABF. I’m very grateful to The Nest for segregating the tournaments in the leaderboards, so I can “cheat” occasionally and use PUs when I just can’t master a level otherwise.

This weeks ABF tournament levels are particularly evil, for example.

In summary, I’m disappointed that Rovio seems to have gone only half-way towards allowing people to play Friends without FB — but I have to imagine it was like pulling teeth to pry this much of a concession out of the FB folks to begin with.

Perhaps with the appearance of using a Rovio account and syncing, eventually you’ll only need to create a Rovio account to play the tournaments, and can invite anyone to play against you that way. Interesting thought…

Why can I no longer purchase small amounts of power up? Previously was able to purchase two, now the smallest amount is twenty. What happened?

I just re-installed this to a different phone since my old one was broken. both are Android. Now it won’t connect to Facebook (Webpage not available at fbconnect://success#access_token=….

Now I can’t play the tournaments with friends on my phone.

How come I can’t play AB friends story levels on my IOS 5? I can play it on my android tablet and my PC. The only option
I get on my IOS is the tutorial tournament? Does anyone know anything about this? Is there something else I can do?

Nothing you can do. That is how the ios app was designed. Tournament Levels only.

My angry birds friends is not opening from Monday. I’m won Halloween tournament. Number one place . But now I can’t open the game to play more . I hope by next Monday , you will resolve the problem . I play on iPad air . It’s 8.01 updated . You should update this app too . I really like to play . I got sixty one gold trophies previously.

I lost my score n my all sling when i login to facebook.. how to i get back..

How can I play on my windows laptop now?