Angry Birds Evolution Out Now Worldwide For iOS and Android

Collect over 100 different Angry Birds characters, evolve them and kick the pigs out of Bird Island in Rovio’s brand new turn-based RPG game Angry Birds Evolution, now out for iOS and Android.

From the App Store:

There’s a new flock on the block. Hatch, collect, and evolve over a hundred all new Angry Birds characters from the other side of the tracks, and kick the pigs off of Bird Island while you’re at it.

Something is causing the the pigs to herd to Bird Island in droves, and the birds have found their eggs in danger once again. It’s up to you to assemble an unstoppable team of evolved super birds and put a stop to the pigs’ shenanigans once and for all. Or at least until the next time they pull a stunt like this…

Collect, assemble, and evolve your flock.
100+ crazy new Angry Birds?! We’re gonna need a bigger nest. The flock is bigger and badder than ever before. Build your own team, combine super skills and evolve your birds into their ultimate form.

Embark on an epic adventure.
Something sinister is brewing on Bird Island. Why are there so many pigs around? Who is behind the mysterious Bacon Corp? What’s the Eagle Force? Who lost the dungeon keys? Find the answers – only in Angry Birds Evolution.

Crush the pigs in explosive battles.
What’s worse than egg-stealing pigs? Over 90 different varieties of egg-stealing Pigs, that’s what. Pirates, ninjas, tourists – someone has to clean this place up. Let the feathers fly in full contact battles and send the pigs packing.

Join weekly events.
Earn awesome rewards, and get a chance to add extra rare birds to your team by taking part in weekly events. Join by yourself or assemble a clan of buddies to compete with other clans. Build the strongest, most awesome clan on Bird Island and rule the roost!

Compete against other players.
The Oinktagon: two teams enter – only one leaves (victorious). Challenge other players in PVP tournaments of the Bird Island pastime, Pigball, and dominate the leagues for even more awesome rewards.

FEATURES:
– Over 100 colorful new characters to hatch and collect.
– Assemble the ultimate flock of birds and take down the pigs with ease.
– 5 Classes of birds with unique abilities.
– Evolve your feathery heroes into unstoppable super birds.
– Explore the island and stop the Bacon Corp.
– Battle other players in the Oinktagon.
– Join clans to unlock perks, compete with other clans, and chat with clanmates.
– Send out scouts for rewards & challenges. 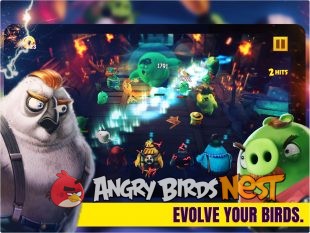 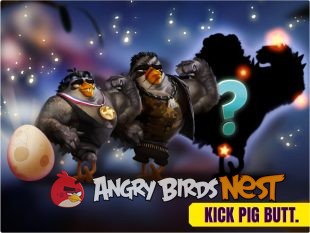 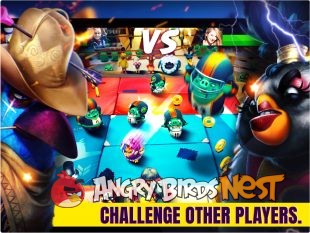 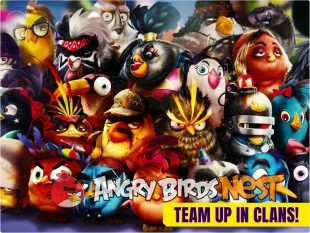 If anyone here has more info or general thoughts please share them in the comments below.

So they deliberately chose to give the birds those ugly movie based designs. Look at the last screenshot. Do those characters look at least a tiny bit appealing? Ugh, this is a devolution of the series, if anything. Pass…

I don’t really mind the movie designs in general, as long as they’re kept to the games that tie in to the movie. But this game… yeah, the art style kind of threw me off in the closed beta phase. I would consider this the Uncanny Valley of the Angry Birds franchise.

@rizdub I hate the movie and those designs with a passion. hated Angry Birds Action!. I hate Angry Birds Match! and I hate this one as well. I will stick to the older, (kind of) better games to be honest.

I actually thought the movie was all right – my biggest problem with it was that I thought there was too much toilet humor and innuendos.

And I think the designs were born out of cinematic necessity. Sure, you can have some limbless head-like characters bouncing around and picking things up telekinetically, and it works fine for a simply-styled mobile game or 3-to-5 minute cartoon. But in a feature-length theatrical movie… I feel like that wouldn’t really work.

Unfortunately I can’t seem to play this game. I had to borrow someone else’s iPad to play it in the closed beta, because it wasn’t (and still isn’t) compatible with the iPad 3 I use for the other games. I tried downloading it on Bluestacks, but apparently it’s not compatible with that either, and I can’t update to Bluestacks 2 (which supposedly would support it) because it still hasn’t been released for Mac.

@rizdub
it won’t work on bluestack 2 either, since it doesn’t support android 5.

I did it. In Remix OS it works smoothly and faster, like other Angry Birds games.

Not sure if I like this game. Reminds me of Action.

the game is also too big for my phone. 400MB? jeez. not sure if I wanna keep it.

when I first try my game on my ipod touch, just when I was about to go fight an opponent, it keeps crashing on me

I downloaded this game, but when I tried it, it said my device isn’t supported.
Please fix it, I really want to play this game.

Looks stupid to me. I miss the classic games.

Yeah, but there are thousands of super shot combos, like Keira, then Dalton, then Charlotte. Keira creates crit zone, Dalton sucks pigs into it, and Charlotte goes through all the pigs, adding 3 hits to the combo bar for each crit (which is every hit). I got a 24-hit combo in 1 shot. Can you get more?

Where is and How do you use evolution essences do you know?

My son want to play with it but says is not compatible, he have an ipad 2 and the OS is 9. something so I’m thinking it’s because the generation of the ipad right? Someone bring me more info.

It says the game requires at least iOS 8, so yeah, that means your device is too old to run the game.

My device is running with O
IOS 9 not 8, that’s why I don’t understand why is not working.

Stuck at boss mode chapter 20 won’t allow item to drop forever stuck. There’s a glitch at the end. I see zeppelin but not able to pass I have screen shots left a ticket no responses yet?
Won’t allow me to insert screen shots iether 😡

I love the game