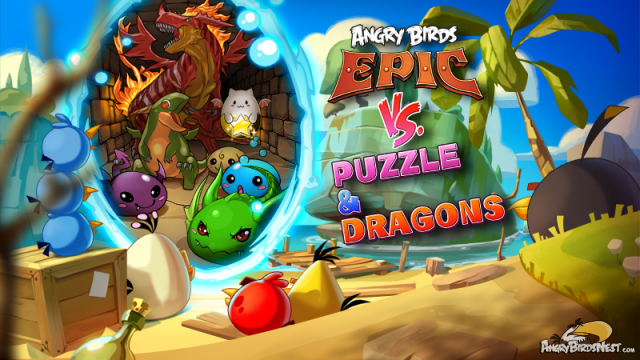 The Angry Birds Japan Twitter account announced that a new collaboration with Puzzle & Dragons is coming.   This time, it’s with Angry Birds EPIC.  But the more exciting news is that it will be a double-crossover event!

The collab dungeon features 4 floors, from “Int” to “Extra-Spicy”–all in a Technical Dungeon format. At the deepest level, the Royal Guard Pig readies his siege!

Use your skill to advance!

Also during this collab, Tyra, Bubblie, Tamadra, Horus and other P&D monsters will be appearing in a special dungeon within Angry Birds Epic! This dungeon is coming soon, so be sure to catch a glimpse of both worlds!

The Angry Birds Japan Official site confirmed the dates and times and also noted that the original Angry Birds dungeon from the first P&D collaboration will be available during the event in the P&D game.

The Angry Birds Epic event date is listed as TBD (to be determined), but will include the following P&D characters – Thira, AwaRin, Tama Dora and Horus.   We can only guess what this collaboration will look like, but it is likely to be very similar to the recent “For the Pirate King” event held in AB EPIC recently.

There has been no confirmation if/when this collaboration will be available in the US.  It is possible that it will happen simultaneous to the Japanese Event, but in the past, the crossover event was delayed in the US.

Lastly, this site offers a glimpse of what the P&D game will look like with the EPIC characters: 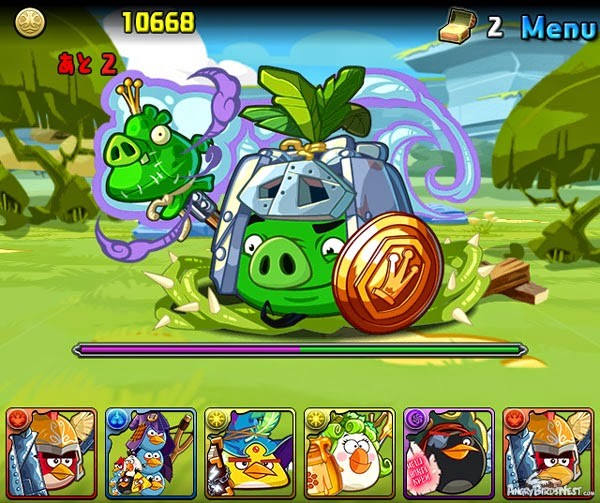 So what do you think, fellow flingers? Are you excited for this crossover event?  Are you fans of both games?  What did you think of the last collaboration?  Add your thoughts and feedback below.

Seems a bit strange but nevertheless exciting. I hope there’s SOME normal gameplay though.

I don’t play P&D, but looking forward to the Epic part of the collaboration.

Interesting! So if Angry Birds are invading P&D on Oct 20, should we assume there will be a P&D update to Epic on Oct 23??? Sounds like it will be a single dungeon, which wouldn’t interfere with my hope for a Ghost King Event on Halloween weekend. Not sure why the Halloween tournament on AB Friends is next week, a whole week early for Halloween.

Because Im pretty sure last year they did two Halloween tournaments in ab friends. This whole thing for ab epic sounds interesting I’m not sure I’d want it to be permanent but it might be or it might not be nevertheless I’m excited. I also hope there is some Halloween event as well the only problem is all the pigs would be ghosts :(

Hmm…… Seems worth a try.

This looks very interesting. Will give it a try.

Not sure what the result will be but willing to give it a try anyways.

@birdleader Out now for bith iOS and Android!

So who exactly am I playing against? I thought it would be my friends, but it seems to be about 6 random players I don’t know.

Hope others will help me figure out the logic, if any, determining mastery points earned in the even battles. Please post in the mastery points forum:
https://www.angrybirdsnest.com/forums/topic/mastery-points/

It is out for a while. Beside that I find that 10 days are too much for a single event, dragoons animation is terrible and possibly the worst of all games I ever played.

Impressive. How come there cant be more crossover ideas?

I finishd this event on 1 place and not recive gifts?
I see only CALCULATE on map. What should i do?

Rovio is having major server issues today, but I’m confident that issue will be resolved very soon for you.

Thx, i send a message